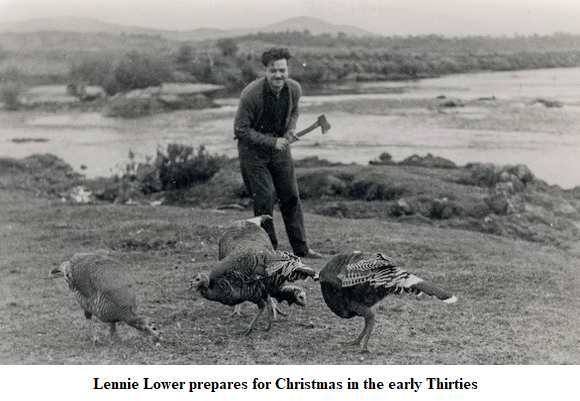 Chatswood is one of those places that are a stone’s throw from some other place, and is mainly given over to the earnestly genteel. Here, respectability stalks abroad adorned with starched linen and surrounded by mortgages. The clatter of lawn-mowers can be heard for miles on any sunny Saturday. Sunday evenings, the stillness of death descends on the place, but if one listens very attentively one may hear the scraping of hundreds of chewed pens as they travel the weary road of principle and interest and pay-off-as-rent.

Agatha’s mother’s home tucked its lawns about its feet and withdrew somewhat from the regular line of houses in the street. It had been paid for. My mother-in-law’s chief occupations were writing letters of complaint to the municipal council, and calling upon God to look at our socalled democratic government and blight it. She also laid a few baits for the neighbours’ dogs, kept a strict eye on the morals of the whole street, and lopped off any branch, twig or tendril which thrust itself from the nextdoor garden over the fence and so trespassed on her property. What spare time she had left was used up by various communings with God about the water-rates, and the only really light work she indulged in was when she seated herself behind the window-curtain and watched for small boys who might be tempted to rattle sticks along the front fence. Altogether, she was a busy woman. And then, of course, there was the parrot. The parrot was also an opponent of governments, cursed the municipal council, squawked miserably over the water-rates and was withal highly religious. Whether this spiritless subservience to local opinion was due to force of example or merely a desire for a quiet life, I do not know. In this description of my mother-in-law’s mode of life I think I have written with a certain amount of tolerant restraint. She is an old lady and the age of chivalry is not dead while a Gudgeon lives. Perhaps a different son-in-law might have described her as a senseless, whining, nagging, leather-faced old whitlow not fit to cohabit with a rhinoceros beetle. But wouldn’t.

Arriving at the house, I paused. The lawn needed mowing. I crossed the road and stood regarding the place. That the grass of the front lawn needed mowing may seern a very little thing and not sufficient to make any one pause, but I had bitter memories of my infrequent visits to this place in my earlier days. I would enter and be given a cup of tea, then—”Ha! Now we have a man in the house.”

In other words: “Ha! Here is a work-beast. Let him paint the tool-shed; let him mend the wheelbarrow; bring out the hedge-clippers and the lawn-mower and point out to him the location of the axe and the woodheap.”

That, of course, would be when I was comparatively welcome.

As I gazed across at the place, a window-curtain quivered. I had been seen. I could not now retreat with dignity so I crossed the road, took a deep breath, and knocked at the door. Wiping my feet industriously on the mat, I waited. I could imagine the scurryings and the whisperings that were going on inside. I knocked again. I had expected this sort of thing, and after waiting a few moments longer I turned and made for the gate as though about to leave. The strategy was successful. The door opened a few inches and the hideous beak of my mother-in-law protruded from the gap.

I doffed my bowler.

“You’ve come to see your wife, have you?”

“In that case,” I replied, taking another step toward the gate, “I think I’ll go.”

“You just come inside here!” she whinnied, flinging the door open.

“Come inside at once, my fine gentleman!”

I went in, like the fool that I was.

“Sit there,” she commanded, pointing to a chair at the drawing-room table.

“Now then,” she said, seating herself opposite me, “explain to me, please, if you can—if you can, why my daughter comes to me in tears for my protection. Who are these low women whose company you prefer and why is it that after being drunk for practically every day of your life and ill-treating and starving Agatha, my daughter—my daughter, mind you, who has had a better upbringing than the whole of your common Gudgeon relations put together and the Lord God on high who watches over His lambs knows what it cost me to bring up my girls, the sacrifices I have made, the money I’ve spent; me, a poor lone old woman who has had to struggle and pinch to keep a roof over my head and paying for this and for that, and the council wanting me to pay for the drains—me, mind you; an old woman who has hardly enough to keep body and soul together, paying for their filthy drains. I never asked for drains. Why should I? What do I want with drains at my time of life? Calling themselves aldermen—”

“And you,” continued my mother-in-law, recovering from the interruption. “You have the audacity, the impudence, the—the—”

“Hyperbollicality?” I suggested. It was the best I could think of at the time.

“The brazen impertinence to come here and ask to see my daughter. I’d rather see her dead and in her grave!”

The parrot scuffled feverishly up and down the table.

“Call this a government!” it demanded hoarsely.

“Don’t ‘ma’ me! Don’t try any of your soft snivelling ways with me, my soft-soaping gentleman!”

“I came here to see Agatha!” I shouted, thumping the table. I was becoming annoyed.

“Don’t you raise your voice to me!” squeaked the old lady, clawing the air.

The parrot was almost frantic with excitement. It staggered drunkenly up and down the table between us, shrieking of governments, of municipal councils, of poor, lone women, and the mercy of God.

“Where is Agatha!” I shouted, rising and jamming my hat over one eye.

“Not a penny!” shrieked the parrot. “Call this a government! Take that back, I won’t have it! This is your council for you! Milko! Call this—”

I swiped it off the table and it struck the floor and lay prone, frothing at the beak.

She picked the parrot up, and it croaked weakly, “This is your council for you,” and ceased to flutter.

“You drunken beast!” hissed my mother-in-law.

“That’s all right,” I replied. “You like your little drop, you old sponge.”

As I made for the door I noticed for the first time that Agatha was in the room, regarding me with horrified amazement.

She covered her face with her hands and dashed out of the room.

Almost immediately after, a dog dashed in with Gertrude bringing up the rear. I decided that it was best to leave and would have managed it easily only for getting caught on the front gate. I vaulted it all right but my coat caught on one of the pickets. The dog leapt the gate and came at me with all external appendages streamlined and its teeth bared for business. Just in time, I wrenched the picket off the fence and swiped it in midleap. It never yelped but fell back on the pavement, breathing calmly. The three women screamed on the front lawn. I threw the picket through the largest pane of the front window and hurried away. One dead parrot, one unconscious dog, one busted fence, one broken window. Not bad for one visit I thought as I bounded into the waiting taxi.

I was calm, but I felt sickened with life. With the very best intentions I had come, and in a shower of broken glass and dead parrot I had gone. And not through any fault of mine had the sweet spirit of forgiveness turned to ashes in the mouth. The proffered hand of friendship had been spurned, and Charity was even now feeling her bruises and sobbing in the arms of her disillusioned sisters, Faith and Hope. I am a man of vast experience and worldly knowledge and perhaps I should have passed over this rebuff with a shrug and a smile; but my better nature had been wounded. The iron had entered my soul and no faith-healer could help me unless he was also a blacksmith.

As I jolted along in the taxi, too dashed in spirits to smoke, I felt that I understood why men burned their boats behind them, sold up their homes and went to Africa to hunt elephants.