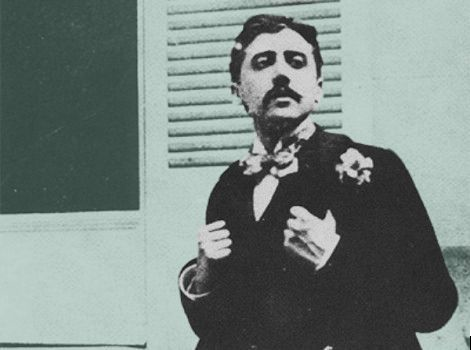 Marcel Proust, the ultimate self-isolator, was born 150 years ago on July 10, 1871. Valentin Louis Georges Eugène Marcel was the elder son of Adrien Proust, a doctor (himself the son of an Alsatian grocer), and Jeanne Weil, the rich daughter of a stockbroker originally from Württemberg. Jeanne was, and remained, Jewish while Marcel was baptised in his father’s Catholic faith. 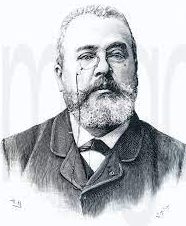 Adrien Proust (left), was not just an eminent physician but a celebrated epidemiologist (and thus a man for our time) made famous — and effective — the idea of a cordon sanitaire, a sanitary zone circling Europe in order to keep out cholera. He travelled to Russia, Turkey, and Persia in 1869 to fathom the previous routes by which earlier outbreaks of cholera had entered Russia and Europe. For his resulting, successful quarantine campaign he was awarded the legion d’honneur. As Edmund White has written, “Whereas Marcel would be willowy, artistic, asthmatic, and obsessed with titled ladies, his father was the very model of the solid upper-middle-class citizen, fleshy, bearded, solemn, and, thanks to his wife’s fortune, rich.” 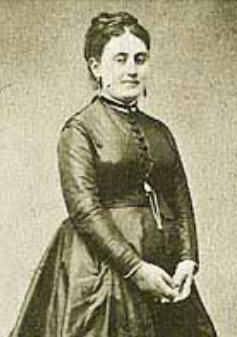 defeat, when Napoleon III was dethroned and the socialist commune declared, before the Third Republic was established. Houses went unheated as wood and coal supplies ran out and starving Parisians were forced to eat dogs and cats:  cats cost six francs, rats one. Jeanne Proust (right) was so anxious and hungry that when the sickly, fragile Marcel arrived he was not expected to live.

He survived but became allergic to pollen, dust, damp, smoke, odours, especially perfumes and the scents of his favourite flowers; he was easily chilled, easily fatigued, easily offended, thinking often of duels; he frequently gave way to weeping, or had tantrums in which he broke things or crushed his friends’ hats; he suffered prolonged spells of melancholy, grew pale, lost weight, and went into mourning…..

As a child, he holidayed in Auteuil and at Illiers (which he enshrined as Combray), studied philosophy and literature at the Lycée Condorcet. He even spent a year in the army as a sub-officer and then studied law and political science at the Sorbonne.  In 1896 he published his first book, Pleasures and Days.

From his mid-twenties he spent about nine years, with the aid of his mother (almost until her death in 1905) and with Marie Nordlinger, the English cousin of his lover/friend, Reynaldo Hahn, obsessively translating Ruskin. He abandoned a novel, Jean Santeuil; and a collection of critical essays were left unpublished (they would finally appear as Contre Sainte-Beuve).

Left rich by Jeanne, he could have remained idle. When he wasn’t gasping for air, he was gaping at and aping the gratin; in awe of grandes dames and en amour with chauffeurs and serveurs; dazzled and puzzled by the ancien regime. Anthony Powell, who quietly enjoyed being dubbed ‘the English Proust’ observed, as only he could, that “It is possible to underrate the social success of young Proust.”

His friend, the duc de Gramont remarked that aristocrats would invite him for country weekends not because of his art but because he and Anna de Noailles were the two funniest people in Paris. The salon culture of aristocratic France between 1870 and 1890 was neatly summed up by the duc de Doudeauville on his blackballing of the writer Paul Bourget from the Jockey Club: “I’d like to think there’s still one place in Paris where individual merit doesn’t count for anything.” 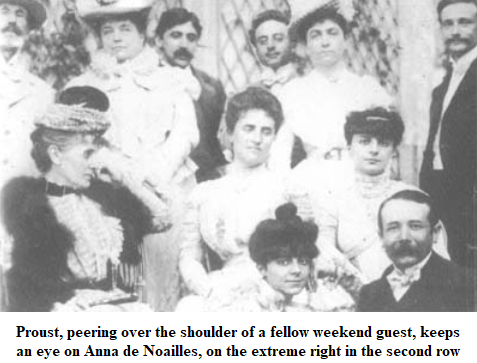 Out of all this was born the astonishing A la recherche du temps perdu.  One critic put it, “At twenty pages per hour, the trip takes two-hundred hours. In that time you might peruse War and Peace, The Brothers Karamazov, Bleak House, and Middlemarch, and still have time left over for several James novellas.”

The pandemic and serial lockdowns have prompted suggestions that now was the ideal time to read those seven volumes – immersing oneself into the detailed life of another; and gain entry into a prestigious (pretentious?) club of those who can claim to have conquered Mt Proust. In his sesquicentennial essay for The TLS, Adam Watt has written, “Our sensitivity to time’s passing, the calibration of our bodies and minds to the minutes, hours, days and weeks by which we measure out our lives, has shifted markedly in the course of the past eighteen months. Indeed, many have turned to Proust as their lockdown reading, a work of longue haleine and longue durée for turbulent times.”

Proust must remain the most inspiring victim of quarantine. In his case, it was a personal choice but for the last three years of his life, he ensconced himself in his cork-lined bedroom on the fifth-floor apartment at 44 rue Hamelin in the 16th arrondissement, just south of the Arc de Triomphe, blocking out all light and sound as he penned his masterpiece.

In December 1919, his friend and champion Leon Daudet, one of the ten members of the Académie Goncourt, called on him there, having just met to decide the recipient of the Prix Goncourt for that year. It went to Marcel for the second volume, À l’ombre des jeunes filles en fleurs (In the Shadow of Young Girls in Flower). Arriving at rue Hamelin he found, of course, that the recipient was asleep. When eventually roused, Marcel expressed his gratitude and pleasure.

It had been a close-run thing. Four of the ten members had voted for Roland Dorgelè’s Les croix de bois (Wooden Crosses) a pacifist novel described as the ‘war book par excellence’. Dorgelès’s brazen publisher promoted his book as ‘Prix Goncourt’, with ‘four votes out of ten’ in small type below. Wooden Crosses was drawn from Dorgelès’s fifty months on active service (while the already ailing Marcel lived like a lounge lizard, far from the fighting; although he suffered the loss of young friends keenly; and his younger brother, Robert, served as a surgeon on the front.)

Bothers Edmund and Jules de Goncourt had endowed the Prix in 1896 as an annual prize for fiction to be ‘given to youth, to an original talent’. The first Prix was awarded in 1903.  Even then Marcel was 32. The ‘youth’ of the 48-year-old winner provoked some mirth. Dorgelès was 34. As the week progressed, media reports kept aging him. Proust quipped that he would soon be 100. In fact, he would soon be dead – three years later, in 1922, at the age of fifty-one.

Le temps was not on Marcel’s side. The Great War and silent presses had delayed release of les Jeunes Filles until 1919. But with the Goncourt, all this changed. To think that publication of the first volume, Swann’s Way, on 14 November 1913 had cost Marcel more than 1,000 francs – for 1,750 copies. 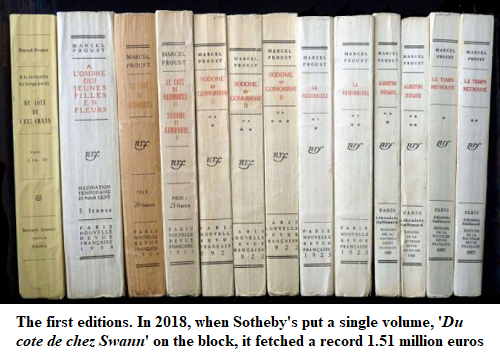 The unexpurgated diaries of Chips Channon (2021, edited by Simon Heffer) shine a light (if not a true one, certainly a piercing one) on the strangeness of Marcel at this time. He was dining in Paris with Princesse Dmitri Soutzo, between Proust and Cocteau “the two wittiest men in Europe”,

“His boodshot eyes shine feverishly and he poured out ceaseless spite and venom about the great. His foibles are genealogy, heraldry, and Ruskin. He knows the arms and quarterings of every duke in Europe. His black hair was tidily arranged, but his linen was grubby, but [sic] the rich studs and links had been clumsily put in by dirty fingers. Proust has always been kind to me and I don’t like to libel him in the pages of my diary ……”

Of course, Chips went on to do just that; recounting an episode a few days later when, walking with a friend, Maurice d’Astier, he failed to notice Marcel passing them. Proust apparently wrote the 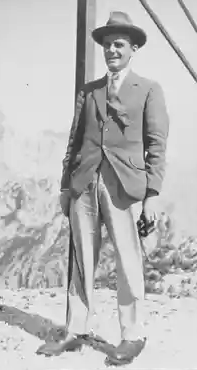 next day to Maurice “the letter of a madman, asking him [in] twenty-seven pages of superb prose  for an explanation why I had cut him.”

For non-Francophones, one of the joys of the roman-fleuve is, in this writer’s view, the imperfect but exquisite Edwardian purple prose of Proust’s first translator, C.K. Scott-Moncrieff (left). The extraordinary Scott-Moncrieffe’s life story is itself a revelation. See his great-grand niece, Jean Findlay’s Chasing Lost Time: The Life of C. K. Scott Moncrieff: Soldier, Spy, and Translator (2016).

C.K. was either robustly Anglophilic or excessively prurient with his choice of titles. His decision to adopt a line from Shakespeare’s Sonnet 30   Remembrance of Things Past – rather than the subsequent, and now accepted, In Search of Lost Time gave the work an Elizabethan patina. The appearance of the first volume in English was well-received but the ailing Marcel was moved to gently protest at the translation of Swann’s Way.  He would have preferred In Swann’s Way (which surely would have meant something else). À l’ombre des jeunes filles en fleurs became Within a Budding Grove. CK’s prurience kicked in with Volume four. Sodome et Gomorrhe was rendered as Cities of the Plain.

In the Shadow of Young Girls in Flower, the more literal and prevailing title of prize-winning Volume 2, set mainly in Balbec in seaside Brittany, describes a series of hopeless adolescent crushes — Swann’s wife, Odette, their daughter, the blonde Gilberte, the band of jeunes filles en fleurs, then the enduring focus of his affections, the dark-haired dream girl Albertine, one of Proust’s greatest characters. She would only be eclipsed by the repellent yet compelling Baron Charlus. 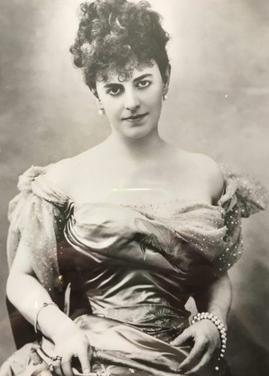 And, of course, the duchesse de Guermantes, whose title provides the title of volume three, The Guermantes Way (published in two volumes in 1920/21). Like Truman Capote and his Swans half a century later, Proust, although he never really knew them,  became obsessed with a trio of salonistas who dazzled him with their patrician glamour.  He immortalised and morphed them into Mme de Guermantes.

In her elegant, erudite study, Proust’s Duchess (2018), Caroline Weber brings back to life those three muses, Mesdames Greffulhe (right), Straus and Chevigné, who put the belle into the belle epoque. This, in Lord Lytton’s words, “brilliantly superficial” society was one where, as Guy de Maupassant said, “laughter is never genuine”.  Intelligence had no value, to strive was vulgar, and, as the critic Joseph Epstein put it, “the only ignorance that counted was ignorance of dress, pronunciation, and the pecking order. “Life,” said Bismarck, “begins at baron” Such absurdity had to be short-lived and yet its disappearance somehow made it worth remembering.

As the pandemic drags on, there is still time to climb Mt Proust and be able to proclaim it before the centenary of his death in November 1922.

Mark McGinness is a frequent contributor