The Dying Moments of HMAS Sydney 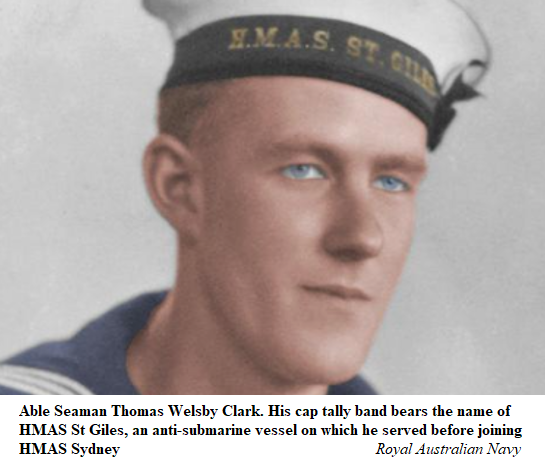 The identity of the HMAS Sydney crew member now revealed, whose body was recovered in World War II and buried at Christmas Island, focuses attention once again on the final fight of this gallant warship. The loss of her 645 ship’s company members – more than this nation lost in the Vietnam War – was a terrible blow to the country. But how did such ships fight, and where does the only recovered Sydney man, Able Seaman Thomas Welsby Clark, aged 21, fit into the puzzle?

Ships of the time fought mostly with guns, depth charges, and torpedoes. The first ranged in size from the monsters battleships carried, that hurled shells the weight of a small car and the size of a motorbike, to close-quarter weapons such as machineguns and quick-firing larger calibre guns.

The big guns fired shells designed to punch through the hull and superstructure of enemy vessels, bursting inside the ship, destroying its equipment and, of course, its people. Depth charges – barrels packed with explosives, in simple terms, were dropped or thrown over the side to attack submarines. ASDIC – sound location systems, what the US navy called sonar – was used to locate the enemy. Able Seaman Clark, who joined the Navy in August 1940, had qualified in submarine detection, and likely served in action on the ASDIC repeaters, near the forward ‘A’ gun turret.

Torpedoes – often thought the province of submarines – exploded either on contact or via a proximity fuse. The warheads were large: often over 100kg in size. The explosion caused was massive: if a torpedo caught a ship the size of Sydney amidships it could be enough the break it in two.

In basic terms that was what Sydney and her opponent – the German surface raider Kormoran – were armed with. The cruiser had additional advantages however. She carried an aircraft. In WWII such machines could be used for sighting the enemy; reporting its type and location, perhaps attacking with bombs or torpedoes, and reporting via radio on how accurate and effective was its mother ship’s gunnery. 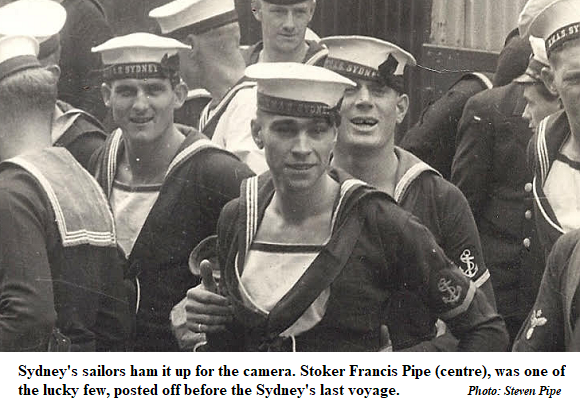 Sydney’s further advantage, however, was enormous: she outranged the enemy, so her guns could strike st s further distance than its adversary. Carefully manoeuvred therefore, Sydney could keep outside the circle Kormoran could fire into, and remain unharmed. The Australian vessel was furthermore a dedicated warship, rather than a converted merchantman like the Kormoran. The Australian warship was specifically configured to be a machine of seaborne destruction, her armour protection and weaponry designed in a complementary fashion to see her fight and win. Simply put, she should have won this battle with ease.

It seems the German survivors’ accounts are accurate. Sydney closed to investigate her possible target, which was disguised as the Dutch vessel Straat Malakka – a legitimate ruse under the rules of war to which both

Germany and the British Empire subscribed. Sydney came so close that individual ship’s company members could be distinguished, whereas if she had been suspicious and ready to fight she would have remained outside the range of the Kormoran’s guns, many kilometres distant in other words. The ships were soon sailing almost alongside each other.

Captain of the Kormoran (above) Detmers wrote later that his disguise was only of limited use. He determined to fight with the advantage of surprise he had obtained.  The Dutch flag was struck; German colours hoisted; the screens disguising the superstructure were dropped; and a well-prepared initial salvo fired – to devastating effect – hitting Sydney very effectively around the bridge and forward guns. Both ships began to fire their main gunnery at each other, along with myriads of smaller weapons such as machineguns, which due to the close range could now be used.

According to Kormoran’s gunnery officer, Lieutenant Fritz Skeries, over the course of the next 55 minutes, Kormoran fired 450 rounds from her main armament of 5.9-inch guns, and several hundred from her anti-aircraft batteries. Both ships fired torpedoes: the German claiming a hit, while the Australian’s missed. Skeries commented in the final stages of battle the Sydney was being constantly hit by the raider’s gunfire. Soon the cruiser, crippled, limped off to the south-east, on fire, with a flickering glow showing her presence until around midnight, some eight hours after the action had begun.

Where was Clark, the sole sailor recovered from the Sydney during all this? Each man had his action station. It is likely, seeing as he ended up in a Carley float carried on that deck, that his was somewhere near the weather deck. The ASDIC’s use was negated in surface combat, both from the ship’s engine noise and the guns firing. He would likely have had additional duties, perhaps as a messenger, or assisting with the guns ot torpedoes, or as a damage-control rating. But he was in a vulnerable area: the rapid and massive fire from the Kormoran would have inflicted considerable gunshot wounds and death on anyone caught by it. There was little to protect the upper-deck sailors except the superstructure and the very equipment they were operating. Clark may have been hit early – we will never know.

Inside the Sydney – “down below” – the ship’s company were “fighting their ship” that is, working its machinery so that it manoeuvred and fired its armament according to the orders of the commanders. As the officers fell their authority delegated to the next in line of seniority – not that this was formally done, but every man would have known his station and how to do his task and, indeed, that of others around him. As the ship took hits their task widened to include damage control. Warships are divided  into watertight compartments, closed up during action, but these would have been penetrated by enemy strikes. If the sea came in it had to be stopped. If fires started they had to be contained and extinguished. If flooding happened it had to be coped with – all of these tasks were what the Sydney men likely met most capably. After all, they were some of most skilled sailors in the fleet, many of whom ­­– Clark was only joining the RAN around then – had fought and sunk the Italian cruiser Bartolomeo Colleoni the previous year in the Mediterranean. 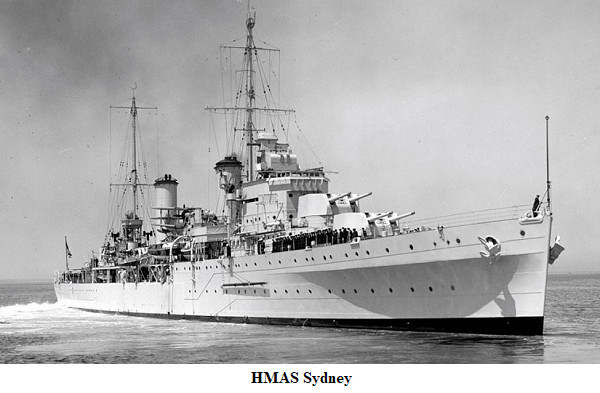 The battle ended and Kormoran’s people took to their boats, but not without significant loss of life from their sinking ship, and not before setting explosives to detonate once they were clear. Over the next days they were captured at sea or on the WA coast. Their stories were tallied, but suspicion was immediate. The Australian ship should have won the battle, yet she was lost with all hands. Over the decades that followed, stories circulated and grew. Had the Kormoran committed war crimes by firing under false flags, then despatching any surviving witnesses? Others were foolish and fanciful: Were Japanese forces involved, weeks before their strike on Pearl Harbor?

Clark, the Carley float sailor, ended up recovered near Christmas Island, but his body indicated he was long dead. As the Sydney began to inevitably sink, her ship’s company would have kept fighting to the end, trying to save their vessel. Looking at the wreck, it seems likely a sudden collapse of the bow sections took her on a quick plunge to the seabed, thousands of metres below. Those below decks were trapped, and we can only hope their ending was quick. But those on the weather deck would have been washed into the sea, there to cling to any lifesaving equipment that came to the surface with them. The Carley float that was recovered with our sailor was battle-scarred, and so inevitably would have been everything else – the final fight was at close quarters, and the gunfire exchanged would have been massive, penetrating everything. It was pure chance the Carley float stayed on the surface so long as it did.

In the end the identification of this survivor tells us little more. Able Seaman Clark, newly joined, was a qualified anti-submarine sailor, but he likely had an additional action station billet for a surface action. Whatever his duties, he would have been a hard-pressed young man as he, like his comrades fought to both “fight the ship” and save it at the same time. His last hours were spent serving his country well.

Sydney fought capably, and the result was the sinking of both vessels. The chance survival – and then eventual death – of just one sailor, probably of a handful, only confirms that the ship’s company of the cruiser fought in the finest traditions of their service: to their utmost and to their end. Vale HMAS Sydney.

Dr Tom Lewis served in the Royal Australian Navy as an intelligence analyst, and saw active service in Baghdad, in the Iraq war. He was awarded the Order of Australia Medal for services to naval history. He is the author of 18 books, one of the latest being Teddy Sheean VC, an examination of the last fight of HMAS Armidale and her best-known sailor, who was awarded the Navy’s first Victoria Cross in 2020