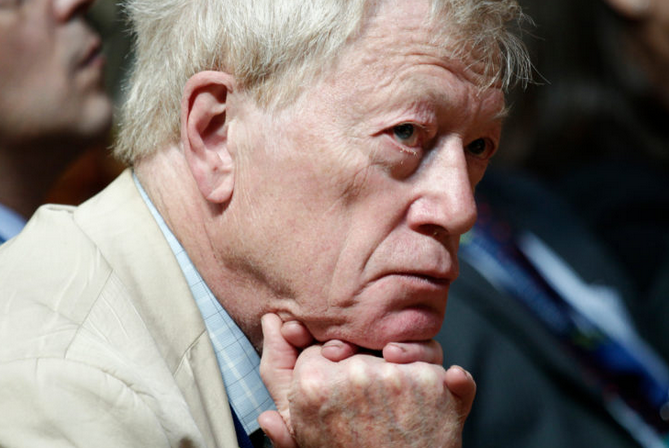 We have lost one of the great conservative Rogers, far too early at what has now come to be regarded as the young age of seventy-five.  Sir Roger Scruton’s passing has occurred, too, merely days after we lost Gertrude Himmelfarb (aka Mrs Irving Kristol), another conservative giant of the late twentieth and early twenty-first centuries and herself a scholar of truly great repute.

I learned first of Roger Scruton’s deadly cancer from that doyen of American “mainstreet conservatives”, Rod Dreher, who tearfully brought the news to us all in 2018.  I learned the saddest of sad news of his passing from another American conservative titan, and a close friend of Roger’s, Professor Robert George of Princeton. I read my first detailed account of his passing courtesy of his other great friend and fellow Brit, the accomplished and incisive Douglas Murray, who is fast emerging as Scruton’s obvious successor as the Western torch bearer of vigorous, classical traditionalism.

That Scruton meant so much, personally as well as philosophically, to these three eminent persons says plenty about conservative ties across the oceans and across the generations (Murray has just turned forty).  All three recognised the importance of Scruton to a Western world now so unmoored from its historical, cultural, metaphysical foundations.

I haven’t felt such a loss since Australia’s accomplished conservative writer and thinker, Christopher Pearson, passed away some years ago, also far too young.  Like Scruton, Pearson had that rare combination of common sense, wide interests informed by deep learning, and the b.s. detector most often residing in the front bar of the local pub.

His university teaching, despite the best efforts of his many leftist enemies early in his career, eventually prospered on either side of the Atlantic and in Europe and brought to successive generations an appreciation all of the liberal arts, in particular their integration into a cohesive, unified and meaning-laden body of Western thought.  His teaching, it must be said, was perhaps at its greatest outside the university;his whole life became a teaching moment.

He is rightly regarded as the greatest conservative thinker of our age, and will stand with Russell Kirk in the US and Michael Oakeshott in the UK as the modern go-to men of tradition standing in the distinguished line that stretches back to Edmund Burke and Alexis de Tocqueville.  Sir Roger has recently spoken thus:

My life’s work, in a way, has been an attempt to define the word “conservatism” and to rescue it from being a term of abuse.

A task, clearly, that is far from complete, and now we must rely upon others in the relay team to carry the baton.  It is not only Sir Roger’s life’s work, but the work of all our brothers in arms.

Scruton was not especially a Thatcherite, and a number of twenty-first century right-of-centre thinkers are perhaps coming to agree with him that free markets and capitalism are not the only things required for a truly thriving culture and polity.

Fourth, Roger Scruton was an activist who got his hands dirty for the cause.  Seriously dirty, behind the Iron Curtain and at great personal risk.  More on this anon.

Much will be said, rightly, about Scruton’s philosophical breadth.  His reach was simply astounding and the term “polymath” barely covers his contributions of the first order across so many fields.  Oh, and for good measure he was a novelist and composer.  His American friend of no small stature himself as a man of letters, Jay Nordlingler, was channelling Wiiliam F Buckley when he described Scruton as a true “latitudinarian”.  Only in WFB’s expansive dictionary, and in this case entirely apposite.

Two personal favourites among his works were his evisceration of sixties leftists, Thinkers of the New Left, whose publication literally cost him jobs and future publishing contracts.  But it was worth it – at least for this reader.  Scruton discovered of the Left, like the enemies of that old Dad’s Army Corporal Jones when confronted with the bayonet, that “they don’t like it up ‘em”.  This was Scruton the culture warrior at his best, wielding the bayonet with the ultimate force, and deadly accurate to boot.  Scruton even republished the book (as Fools, Frauds and Firebrands) in later years, with fresh perspectives wrought by the experience of living through the demonstrably evil outworkings of the ideas of those that he had earlier so eloquently trashed.

Another favourite of mine is his very recent take on Britain today (Where We Are, a book that is definitely much better than its title).  His treatment herein of globalisation and its discontents, especially in relation to culture, stands alongside the work of JD Vance and of Angelo Codevilla in the US as an exemplar explanation of the rise of the cranky mainstreet right and the voting patterns this crankiness portended in the US and in Europe.  His unpacking of the intersection between globalisation, financialisation, outsourcing and mass immigration is simply outstanding as a conservative critique of unbridled globalism.

I have had the great pleasure of meeting Roger Scruton and have him sign books for me in two hemispheres.  The first occasion was at Cambridge University, where I had the great honour of delivering a postgraduate seminar in 2011.  Perchance, Sir Roger was delivering a lecture that week on music at his old digs in Peterhouse.  It was a tour de force, as always, and I had to rush off to Waterstones Bookshop to buy a second copy of one of his many classics in order to have him autograph it.

The second occasion, some years later, was at a Campion College event in Sydney.  Scruton brought to a new audience of attentive, bright young scholars, and a few old stagers as well, a freshness of insight and a depth of learning that those who were there will long treasure.

Roger Scruton merits his own entire bookcase shelf in my study.  The only other writers who come numerically close are Joseph Ratzinger and Paul Johnson, perhaps Roger’s equals in breadth and depth of intellect, learning and interests and as fellow giants of twentieth century scholarship.  As with the passing of any intellectual giant, these days give us pause to reflect on our loss but also to re-connect with their writings.

In Scruton’s case, where to re-start?  In his lightness of writerly touch and engaging, lilting prose, he has traversed with unspeakable eloquence such topics as wine (listen to the podcast below), sex, Hegel’s dialectics, postmodernism, the current state of Britain, conservative environmentalism, the meaning of conservatism, the history of Western thought, architecture and the English Church.

As Roger Scruton noted – in a Spectator Diary of sorts on December 21, 2019 – what was to be his final year mostly held for him little joy.  He was ruthlesslessly entrapped by an evil leftist in short pants in an interview which he graciously and too innocently provided to The New Statesman (coincidentally the former home of Paul Johnson – how standards have declined there).  His interviewer, whose name will not be recalled by subsequent generations and whose reputation has already passed into the dustbin of history, then proceeded to edit the interview in such a way that made Scruton out to be all of the things reviled by the leftist progressives of the day, and to publish it, waiting for the inevitable social media storm to achieve the objective of claiming a prime conservative scalp.  A British Conservative Government in name only then proceeded to strip Scruton of an unpaid though important job it had awarded him only months earlier.  It was a truly disgusting affair, executed pathetically on Theresa May’s watch.  The said journalist then celebrated his scalp on social media, with champers to boot.  A giant of the right had been felled!

See also: How to Tie the Left’s Forked Tongue

Scruton defended himself and his falsely trashed reputation, and his young friend Douglas Murray courageously took up the fight which aimed at reputational rehabilitation.  It worked, with the help of Boris Johnson’s arrival at No 10.  That a Tory government did not have either the nous to see what had occurred nor the cojones to stand up for one of its own speaks plenty about why thinkers like Sir Roger are so needed in today’s feebly led Western polities.  (It has been said, again correctly, that Scruton was far more appreciated outside his own country than within it.  It seems often to be the way).

Sir Roger’s year grew infinitely worse, of course, despite his reputational revival.  The cancer that claimed his life struck savagely and quickly, before we could really take it in.  But he was to receive one more accolade and one last recognition of his stratospheric status as a conservative warrior.  Back in the 1980s, Scruton engineered with some equally committed and courageous compadres a system of underground philosophical teaching and learning deep behind the Iron Curtain.  The Czech Republic remembered his work, knew what it meant to that great nation’s struggle against the yoke of communist oppression, and awarded him appropriately with its highest honour, in his last days.

One of my favourites among Sir Roger’s massive oeuvre was his personal memoir, written now long ago and titled Gentle Regrets.  He spoke of his childhood, his difficult relationships at home growing up, his Paris 1968 philosophical awakenings, his religious journeys, his philosophical thinking.  What a fantastic, controlled, understated – indeed gentle – understanding of his own life, his contributions, his influences, and his place in the scheme of things, that book title conveys.  At that point, of course, it was far from a complete story.  Despite his earlier career disappointments – he struggled for years to attain academic respectability, an event these days surely to be worn as a badge of honour – he came to be accepted as an outstanding scholar and an intellectual figure of monumental accomplishment.  In the light of his eventual fully fledged acceptance by many, his regrets indeed must seen now as “gentle”.  Scruton also came to the view, expressed in the Spectator article in his characteristically humble way, that the great learning of his life, so poignantly reinforced right at the end, was – gratitude.

It is, indeed, we who should be grateful.  For life, his genius and his life’s indefatigable work.  Let us hope that those famous white cliffs are festooned with bouquets this day, for the Philosopher of Dover Beach.

5 thoughts on “A Legacy of Awe and Gratitude”