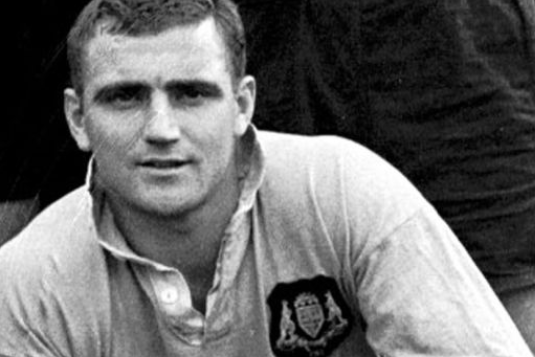 In Quadrant‘s November 2011 edition, editor Keith Windschuttle wrote of Clive James and related matters, capturing in a relative few words the egalitarianism — “though not the chip on the shoulder kind” —  of a writer as au fait with Dante as with a legend of rugby league. Below, by way of an introduction to Clive’s memories of, and tribute to, the great Reg Gasnier (above), Keith’s pithy appraisal of the education, influences and culture that produced a great and distinctly Australian life and mind.

When former Sydney Morning Herald journalist Paola Totaro e-mailed me in September asking for comments on the recent writings of Clive James for an article she was preparing for the Monthly, I got back to her straight away. Clive had written two pieces for Quadrant this year, both under difficult conditions, and I was glad to talk about them. However, I warned Paola that quoting me was probably a waste of time. Given Robert Manne’s obsessive, decade-long campaign to destroy my name, the Monthly was unlikely to mention me in any but derogatory terms. In 2009, when the publication’s previous editor, Sally Warhaft, exercised her own judgment in defiance of Manne, the then editorial board chairman, she was sacked. I told Paola the current editor, Ben Naparstek, was unlikely to risk the same fate, but nonetheless sent her three paragraphs to choose from.

It turns out the October edition of the Monthly reveals I was quite wrong. It publishes Paola’s perceptive piece on Clive’s recent writings and his struggle with leukaemia. To my surprise, it includes the second of the paragraphs I sent her. So, my misgivings were unwarranted and, accordingly, I disavow any thoughts I had about Naparstek not being his own man.

Because few Quadrant readers will bother to read the Monthly, and since there were two paragraphs of mine it did not use, for the record here is the full text:

If you did a blindfold test on a random passage from Jane Austen you could tell straight away it was written by a woman from Georgian England, and you could almost certainly name the author. It is the same with Clive James. His writing comes across immediately as the work of an Australian of our time. Yet it is also distinctively his own. Despite living most of his adult life in England, he has kept his Australian accent in both speech and prose. His two essays for Quadrant this year, on poet James McAuley and artist Margaret Olley, dwell on their Australian tone of voice. Clive knows this topic well since he has long been master of the art.

His tone of voice comes from the 1950s state high school system—not from the teachers but the other boys, mostly from battler families. The prevailing ethos was egalitarianism, though not the chip on the shoulder kind. At the time, you admired people of obvious ability—Clive has written memorably about rugby league centre Reg Gasnier—but you developed a sharp eye for poseurs, self-promoters, time servers and salesmen, and had fun sending them up and putting them down. These were the essential skills for literary criticism and Clive made the most of them when he went to London. They still serve him well today.

Indeed, he gets better as he gets older. In August, when I asked him to write about Margaret Olley, I received a great piece of 2500 words just three days later, composed under chemotherapy and sent from his bed in a Cambridge hospital. What a trouper!

At School With Reg Gasnier

Gasnier had soft hands that the ball stuck to
And a body swerve off either foot
That just happened, you couldn’t see him think.
He wasn’t really knock-kneed 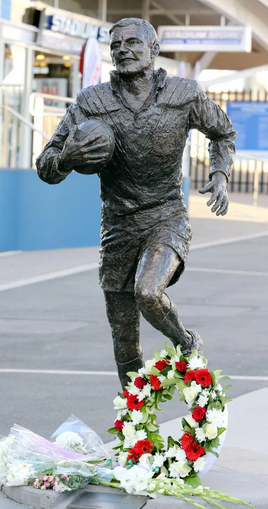 But he looked that way when he ran,
With his studded ankles flailing sideways
Like the hubcaps of a war chariot.
At tackling practice we went at him in despair
And either missed or fell stunned,
Our foreheads dotted with bleeding sprig-marks.
So glorious were his deeds
That the testimonials at school assembly
On the day after the match
Went like passages from Homer.
He put Sydney tech on the football map.
There were whole GPS teams he went through
Like a bat through a dark cave.
Sydney High, with backs the size of forwards
Only barely stopped him,
And they practically used land mines.
Wanting to be him, I so conspicuously wasn’t
That I would brood for hours in the library,
One kid from Kogarah utterly wiped out
By the lustre of another.
Later on, as a pro, he won national fame
His shining story followed me to England:
I couldn’t get away from the bastard.
By the time I got a slice of fame myself –
And we’re talking about the echo of a whisper –
His nephew Mark was playing:
Clear proof that the gift was in the blood.
Reg is retired now
And not writing as many poems as I am,
But give me life again and I would still rather
Be worshipped in the school playground
By those who saw him score the winning try,
A human dodgem snaking through a bunch of blokes
All flying the wrong way like literary critics –
Or at least I think so,
Now that I can’t sleep without socks on.

‘Master is gone; the Apprentice forlorn’