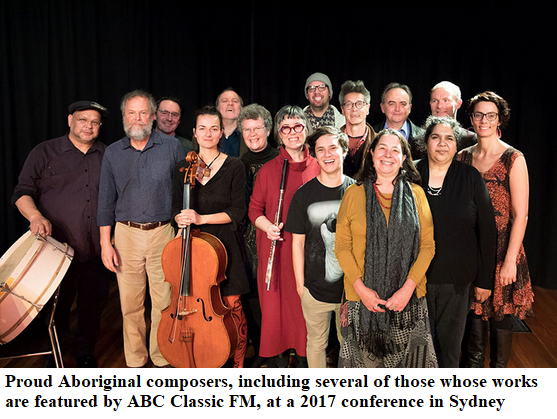 When I first started writing for Quadrant, I was primarily interested in the global warming scam, but my contributions covered the whole range of politics and current affairs.  Recently, though, I seem to have typecast myself as, predominantly, a commentator on Aboriginal issues.  That is not because I harbour any particular animus towards Aboriginal people; however, I have lately wondered if I have become a bit obsessive about this – finding offence in every public expression of Aboriginal ‘culture’ and victimhood.

On reflection, I think not.  I have become a keyboard warrior pushing back against what Gary Johns calls ‘Aboriginal colonisation’ – the phenomenon of having Aboriginal memes constantly shoved down our collective throat to the extent that they are changing our public discourse. The most obvious example is the ubiquitous acknowledgement of traditional owners and elders.  It has become as common an opening as once was ‘Ladies and Gentlemen’.

I have touched on this here and here. As I said therein, our nation, a British nation based upon British traditions and institutions, owes nothing whatsoever to indigenous or Aboriginal tradition or heritage.  Yet it is being brown-washed with a superficial ochre-tinged veneer of wokeness and virtue signalling that suggests we are essentially an Aboriginal nation.

Recently I became aware of more of this nonsense at the NSW Art Gallery, which was:

proud to announce that cross-cultural Wiradjuri woman Karla Dickens, one of Australia’s most exciting artists, has been invited to create a new contemporary work for the Gallery’s iconic entrance.

Dickens’ preliminary concept for the empty niche on the sandstone facade, ‘To see or not to see’ 2019, is a powerful exploration of her female and Aboriginal identity and the continuing legacy of colonialism. It has been on display at the Gallery in the exhibition ‘Dora Ohlfsen and the facade commission’, which explored the story of the empty niche and its original design by artist Dora Ohlfsen.

Dickens said of her concept, ‘The work is about women and invisibility, something just as much an issue today as it was in Dora Ohlfsen’s time. The year of her commission in 1913 was the year my grandmother Myrtle was born. She and her family were constantly hiding or being hidden, forced to mask their indigeneity. The issues she faced continue as the legacy of Aboriginal women today, and it’s important to me, and to my mob from northern New South Wales, to have this chance to speak.’

Launching in 2021 to coincide with the Gallery’s 150th anniversary celebrations, the work will be one of the first visitors encounter as they cross the threshold into the Gallery.

Here is one of what appears to be one of six elements in the work.

I daresay the irony that Dickens’ work is flanked by the names Canova, Goujon, Giotto and Raphael et al is lost upon the curators of the Gallery. You might care to know a little more about Karla:

Karla Dickens describes herself as a menopausal woman pushing 50, with plenty to say and nothing to lose. She is too busy working and going to the tip to be bothered by what people are saying (or not saying) about her. Karla proudly reminds us she’s a mum and her daughter Ginger motivates Karla to work hard for very little money. She’s been a solidly practising artist since finishing her Bachelor degree at the National Art School in Darlinghurst in 2000. Historically, the work ethic has always been an important part of Aboriginal life. Something she recognised in her own family and always understood to be a fact of life for Aboriginal people.

I thought Ian Hamm claiming on NITV Insight that ‘You don’t get much for being a blackfella’ was the height of chutzpah, but Karla’s thoughts on the intrinsic work ethic of Aboriginal life could top that I reckon. Below, another of her Karla’s masterpieces, Clown Nation, featuring a young Pauline Hanson as its centrepiece: 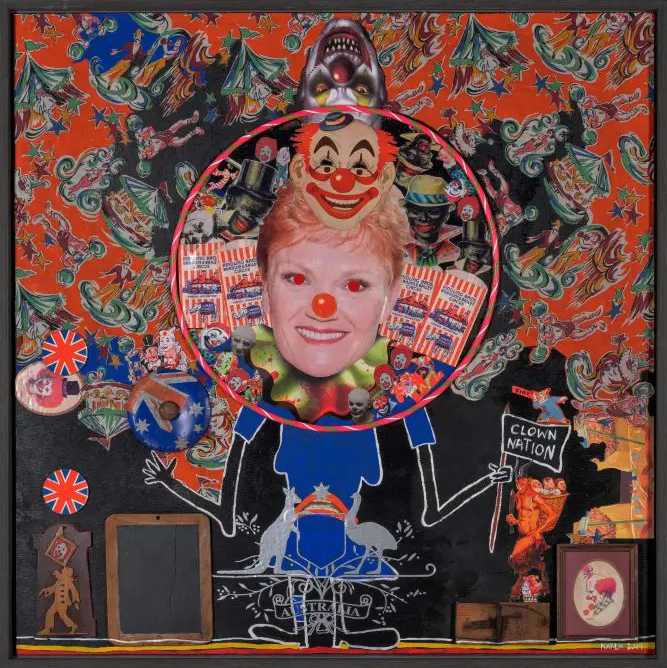 As if that episode wasn’t enough, my resolve to continue was strengthened recently by my own experiences with ABC Classic FM, to which I have been listening for more years than I care to remember.

These days I only listen to it when I am in the car and, over the past couple of weeks, I have been struck by the fact that almost every time I tune in, the first thing I hear is a didgeredoo or clicking sticks or a mournful chant.  The main offender is Russell Torrance on Breakfast from 6.00am to 10.00am weekdays.  Russell, who hails from the UK and came here in 2007, never fails to let us know from which Aboriginal country his offerings are being broadcast.

Below is a breakdown of the Aboriginal items that appeared in the week 14 – 18 November.

I wondered if last week was some sort of Aboriginal Music Week — an addition, perhaps, to the 13 existing events of importance to Aboriginal people that we celebrate annually. So, I checked the previous week.  No, Russell managed to give us 14 Aboriginal pieces in four days of the previous week (The programme for Friday, November 11 has disappeared down the memory hole.)

That seems a somewhat disproportionate Aboriginal representation – albeit that most of the pieces are fairly short – in what is purportedly a showcase of classical music which spans six or so centuries and many nations.

Russell is not alone, although he is the most determined to push what seems to me to be more a political agenda than a cultural one.  There is also the Lunchtime Concert, hosted by Genevieve Lang, Mairie Nicholson and Alice Keath.  Here is last week’s Aboriginal contribution to this two-hour show.

This concert showcased Songs from the Heart.  According to the ABC website it is:

a new a capella cantata created by First Nations composers Elizabeth Sheppard and Sonya Holowell, in collaboration with The Song Company led by Antony Pitts.

The work is a musical and poetic response in five parts to the words and themes of the Uluru Statement from the Heart.

Antony Pitts, by way of background, is an English composer and musician who became artistic director of the Song Company in 2016.  I caught only the tail end of one of his comments during the concert, to the effect that although he had been here only a short time he lamented the wrongs done to Aboriginal people, or words to that effect, and he called out the hypocrisy of acknowledging traditional owners etc when we had no intention of handing any of it back.  I would have thought that, being here since 2016, he might just have heard of Mabo?  I think Pauline Hanson could be recruited to give the appropriate advice to Maestro Pitts.  Here is the concert.]

Songs from the Heart, part 1:

Songs from the Heart, part 2:

Songs from the Heart, part 3:

Sheppard: Ngaala Maaman (The Noongar Prayer)
Sheppard: Noonakoort Karnya Respect
Holowell: This is the torment of our powerlessness

Songs from the Heart, part 4:

Songs from the Heart, part 5:

On November 11, Lunchtime Concert gave us No More Sugar, No More Tea (approx. 30 minutes) described by the ABC website as occupying:

a unique space — not quite opera, not quite theatre, but deeply informed by its writer/composer and natural storyteller Richard Frankland’s Indigenous heritage, as well as co-composer Biddy Connor’s direct melodic style.

Drawing on letters exchanged between Indigenous women and their husbands and sons on the frontlines of the First World War, No More Sugar, No More Tea is a compelling narrative of disappointment, resilience, and what makes us human.

This appears to be the only musical acknowledgement of Remembrance Day. No Vaughan Williams and no Frederick Septimus Kelly, an Australian composer killed at the Somme.

I am not saying this music is bad – some of it is quite good – but what I am saying is that, firstly, it owes vastly more to Western music than it does to Aboriginal tradition and, secondly, it reeks of both tokenism and propaganda.

37 thoughts on “The Fine Art of Being Aboriginal”