So, Henry, Where Are the Medals? 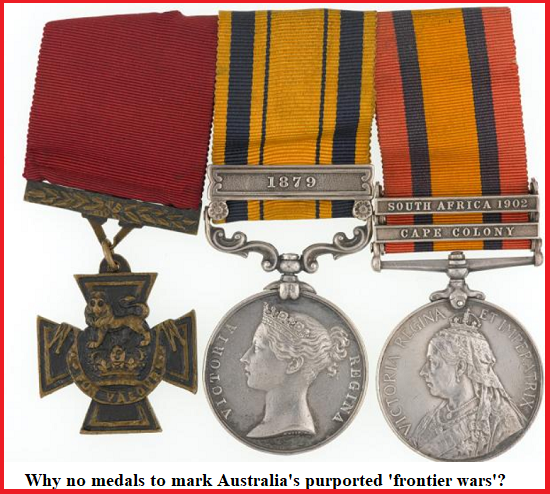 Much ink has been spilled in recent decades in arguments about whether the British colonisation of Australia involved a process that can properly be labelled “war” between the colonisers and the Aboriginal inhabitants. That this is not a dry semantic dispute is shown by the recent decision, and the reaction to it, of the Council of the Australian War Memorial to bow to long-term pressure from the “war” proponents to commemorate the Aboriginal dead of the colonial era in the national War Memorial, along with the Australian military dead of the 20th century.

In his article on the AWM website, “Recognising the warriors”, Henry Reynolds says, in support of AWM recognition of the colonial Aboriginal dead, that:

Extensive new research in Queensland, concentrating on the Native Mounted Police, has raised the possibility the Aboriginal death toll may have been well over 60,000. This would push casualties in the frontier wars to a figure rivalling the total loss of Australian lives in the first world war.

That figure first appeared in 2014 in a paper, “I Cannot Say the Numbers that Were Killed: Assessing Violent Mortality on the Queensland Frontier”. It was published by Queensland historians, Raymond Evans and Robert Ørsted–Jensen. The authors explain that, for want of archival evidence, the figure is necessarily a rough estimate.

But the paper shows just how messy is our colonial history – if we are interested in the truth rather than its fashionable perversion, “truth telling”. The authors estimated that over 61,000 Aborigines were killed in Queensland between 1859 and 1898.They further estimated that over 41,000 of these Aborigines were killed by native police troopers between 1859 and 1898, with settler vigilante actions killing another 20,000.

How will the AWM deal with most of the dead being victims of Aboriginal killers?

The troopers were not forced by brutal white officers to murder their fellows. As recommended by the 1861 report of the Select Committee of the Queensland Legislative Assembly on the Native Police (scroll down three pages at this link), troopers were recruited from areas remote from where they were to serve. This practice was followed to take advantage of the lack of any sympathy for Aboriginals who were not of their kin group. This feature of Aboriginal culture was noted by Archibald Meston, previously Protector of Aborigines, who was appointed in 1895 as a special Commissioner to report to the Queensland government on their conditions in Queensland. He said:

The white man came and shot game and trespassed anywhere without permission. When a white man took up land or a station, he expected the blacks of that locality to move back into other territory, unconscious that this would be an unpardonable violation of tribal laws, and involve immediate deadly warfare with the adjoining tribes…

The native troopers appear to have been enthusiastic killers. “The testimony of every one, officers and civilians, was unanimous in saying that though courageous and daring in a wonderful manner, [they] were the most cruel, bloodthirsty savages, altogether relentless in their warfare against their countrymen”. [quoted in the Sydney Morning Herald of 5 August 1880, by a special reporter who interviewed police officers, officials , miners and settlers to produce a long report published in the SMH in four parts, “The Natives in the Far North”.]

Again, records of native trooper deaths in clashes with tribal Aborigines cannot now be found. But contemporary newspaper reports summarised in “Frontier Hisory Revisited’,  by Orsted-Jensen in 2011, mention 23 such deaths between 1864 and 1893. There were in all probability more.

Will the AWM commemorate the fallen native police troopers? Five white Native Police officers were also killed in clashes. Will there be a place for them in the AWM?

THE practice of the British government during the Victorian era was to commemorate military service with the issue of campaign medals to all participants of all ranks in major wars such as the Crimean and Second Boer wars as well as in a host of other military activities, some very minor indeed. No medal or lesser award such as a bar to a general service medal was ever issued to anyone on the colonial side for service against any Aboriginal resistance.

Henry Reynolds says in his article on the AWM website, “Recognising the warriors”:

Many studies have examined what, in the 19th century were known as small wars, fought between tribal people and Imperial military forces. They often provide valuable insights to how Australia’s frontier wars unfolded. The classical tactic used by the Europeans to put down rebellion elsewhere was to organise punitive expeditions which could operate from land or sea.

There was no rule requiring a minimum number to be involved before official recognition could be made. Small numbers of participants in very minor punitive expeditions were frequently recognised. For example,  the bar “North West Frontier” to the India General Service Medal 1854 was given to fewer than 300 regular and irregular cavalry that comprised the expedition to Panipao in 1852. Bars to the East and West Africa Medal 1887 were separately issued to Royal Navy members involved in the rescue of officials from native capture, 40 seamen receiving the “Juba River 1893” bar and 30, the “Liwandi” bar. The bar to this medal, “Dawkita 1897”, was given to the 42 defenders of the post there, all members of the Gold Coast Constabulary. It was a force similar to the Queensland Native Police. The British North Borneo Company Medal recognised the smallest number of participants I can find: it was awarded to a few policemen and 18 Sikh soldiers commanded by the British civil resident at Labuan, for a punitive expedition in 1897. On a few occasions, larger numbers of Queensland Native Police undertook punitive expeditions against Aborigines, eg, in 1884 against the Kalkadoons in north-west Queensland, without receiving any similar recognition.

It was not until the 1840s that the practice of awarding campaign medals to all participants by the British government began.

This cannot explain the absence of any official recognition of service in what are called “Australia’s wars” prior to then. The Military and the Naval General Service medals for service in the Napoleonic era battles were not instituted until 1848. They recognised participation in naval battles back to 1793 and in military actions back to 1801.  No medal was awarded retrospectively for service against any Aborigines. In any event, most of the violent Aboriginal killings, particularly in Queensland, occurred after 1850.

Most campaign medals were received by men of the regular army and the Royal Navy. But militia units, such as the three Waikato regiments raised mostly in Victoria for service the Maori 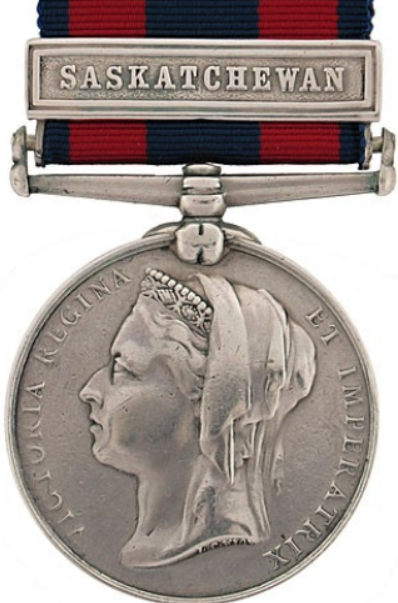 wars of the 1860s, received the New Zealand medal as well as the thousands of regular army and navy servicemen involved there. That participants were confined entirely to local militia, as the Queensland Native Police are sometimes called, did not prevent recognition: the North West Canada Medal 1885 was given to members of the Canadian militia taking part the expedition into Saskatchewan. The Natal Rebellion 1906 medal was issued to the local militia units that alone were involved.

Rare attempts by colonial authorities to issue their own awards on their own motion — the New Zealand Cross in 1869, for example — fell foul of the rule that the award of medals and decorations was a prerogative of the Imperial Crown. However, it was common for colonial authorities to seek and receive royal permission to issue campaign awards. The Canadian government in 1885 and Natal government in 1906 did that. So did companies formed by Royal charter. The British South Africa Company received approval for its Medal in 1890 and the British North Borneo Company, for its medal in 1897. There was no barrier to either the British or colonial governments issuing medals recognising service against Aborigines if any government though such service involved sufficiently war-like activities. None ever did.

THE SUGGESTION is untenable that no official recognition of those involved on the colonists’ side in Australia was forthcoming can be explained by concern by government, whether Imperial or Anglophile colonial, to keep secret the brutalities of the colonial expansion. European governments had plenty of stomach for brutal colonisation methods — the French in Indo-China, the Germans in South West Africa, the Dutch in the East indies and the Belgians in the Congo.

The British did not have to fear that publicity about what was happening in the Australian colonies might turn Britain into an international pariah. Nor were the British in the colonial era shy about using modern weaponry to slaughter large numbers of natives armed only with primitive weapons. In Abyssinia in 1867, British troops cut down two thousand natives in one battle for the loss of two of their own. In the Sudan in 1896, the British army, by then equipped with magazine rifles, machine guns and quick-firing artillery, slaughtered, with minimal loss, thousands of Sudanese armed with spears and swords who were defending their own lands. This story was repeated in Tibet in 1904 and Natal in 1906.

Military activities in New Zealand in the 1860s, the Sudan in 1885, the Boer War and China in 1900 are all commemorated in the AWM. Each involved sufficiently war-like activities to attract a campaign medal for participants, who included Australian soldiers and naval personnel. Given the British practice throughout the 19th century of recognising service in military activities with campaign awards, it is surprising none were issued for service in the Australian colonies if wars of any kind were truly fought here.

From 1981 to 1992, Douglas Drummond was Queensland’s Special Prosecutor following the Fitzgerald Inquiry. He then served a judge on the Federal Court of Australia before retiring in 2003.

9 thoughts on “So, Henry, Where Are the Medals?”

The extinction of the Australian pygmies