El Alamein and a Martyr’s Inspiration 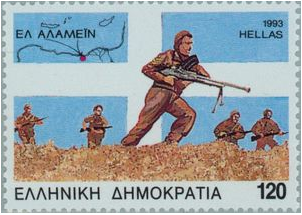 In war, the losing side can turn the tide, and so it turned out for the armies fighting Hitler during the Second World War. Finally, at El Alamein in late 1942, they won a battle — and belief in Hitler’s invincibility never recovered. In a curious way, although not to the faithful, the November 24 feast of soldier and martyr St Menas brings that milestone victory to mind, as I hope readers will indulge me to explain.

Since the war’s outbreak in September 1939, Hitler’s armies subjected nation after nation to Nazi rule. Britain staved off disaster at Dunkirk and prevented outright invasion in the Battle of Britain, but  there was little else to show for three years’ death and sacrifice. The Soviet Union, invaded in June 1941, almost collapsed within three months, but just managed to stop the Germans at the gates of Moscow while holding out in the ruins of Stalingrad. 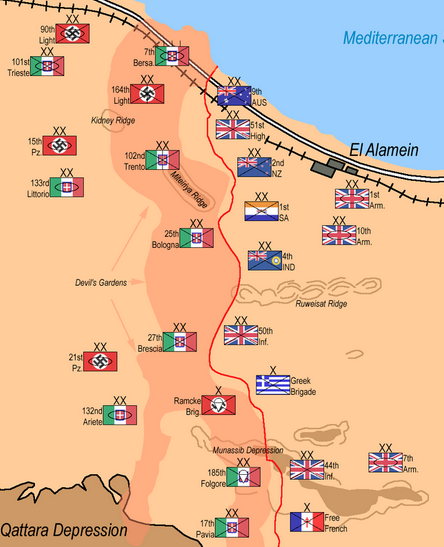 Even when Hitler’s Italian allies were repulsed, German forces came to their aid and finished off the opposition, notably in Greece, and seemed poised to do the same in North Africa. Thus, by mid-1942, German and Italian forces under Erwin Rommel had swept through the desert and were closing in on Alexandria, headquarters of the British Army and the Greek royal government in exile. In July, at the first battle of El Alamein, the Germans were stopped by British forces, including Australia’s 9th Division, but there was still no victory.

However, by October 1942, under the command of Bernard Montgomery, a massive Allied counter-attack was being prepared. According to an eminent Egyptian medical specialist and professor at Cairo University, Dr. Naguib Mahfouz, Montgomery told him

… that before the El-Alamein battle broke out … he saw in a dream the battle raging between the two camps … A man pointed with his hands, and the more he made this movement, the more the German forces were defeated. He continued pointing … until they were completely defeated … [When] asked about the man’s name, he [Montgomery] replied ‘Mena’. [Mena is an Egyptian form for Menas.][1]

At this decisive battle, a Greek brigade went into action. These soldiers had refused to surrender to Hitler’s forces, who despised them and their religion. From this, Egyptian Coptic Christians knew what might happen if Egypt came under Nazi rule.

During the first night of engagement, at midnight, according to the Coptic sanctuary of St Mena:

St. Mena… intervened to put an end to the complete destruction of El-Alamein. At midnight many of the pious people saw the Saint … leading camels, as in [his] icon, to the German camp. It was difficult to describe the terror that struck the Germans, who were undefeated until this time. In that hour Hitler’s authority ended as the troops retreated.[2]

The German and Italian forces suffered heavy losses, had to withdraw, and never recovered the initiative. The victory guaranteed the safety of Egypt and lifted Allied morale. The Russian victory at Stalingrad came a little later, in early 1943.

St Menas, who died a martyr in about 309 AD, had long been venerated in the Egyptian Coptic Christian and Greek Orthodox churches. Public enthusiasm for him grew in the early twentieth century when, perhaps ironically, some German archaeologists unearthed on old sanctuary linked to the saint.[3] In the Roman Catholic Church, St Menas is also a saint, though far less well-known. According to the Catholic Encyclopædia:

Menas was … invoked in many needs and afflictions. The fame of the miracles wrought, spread far and wide and thousands of pilgrims came to the grave which for centuries was a sanctuary and grew into a large city with costly temples, a holy well, and baths. A beautiful basilica was erected by the Emperor Arcadius [reigned 395-408 AD]. The cult was spread into other countries, perhaps by travelling merchants who honoured him as their patron. As a result of various vicissitudes, the doctrinal disputes and the conquest of Egypt by the Arabians under Omar in 641 the sanctuary was neglected and ultimately forgotten.[4]

St Menas, unlike his sanctuary, was not forgotten. The great Venetian painter Paolo Veronese (1528-1588) painted him more than a thousand years after he was killed. His picture (at left), almost 2.5 metres high, was seen for some 250 years in the church of San Giminiano in Venice on St Mark’s square, later demolished by Napoleon in 1807. Today, the painting can be seen in the Galleria Estense in Modena. The saint is obviously a solider. He appears strong and resolute, as he steps out of a niche to fulfil his duty. His red cloak symbolises his impending martyrdom.

St Menas was born around 285 AD in Egypt into the family of a provincial administrator of the Roman Empire. Both his father and mother were reputed to be Christians, a religion which had spread widely by that time, and counted perhaps as many as five million members among the 50 million-or-so thought to be living under Roman rule.

When Menas was about 14, his father died, and a year later the boy joined the Roman army in which numerous Christian soldiers served. Christians were not outlawed and some were even members of the Roman Emperor Diocletian’s household, but they were not wholly trusted, nor was the Christian faith considered respectable.

Emperor Diocletian had come to power in late 284 AD, succeeding a series of seven emperors in the preceding 10 years, of whom at least four  were assassinated. He was determined to survive and re-establish Imperial authority. While Menas was growing up, Diocletian restored order to his vast dominions which encircled the entire Mediterranean and extended up into Gaul and over to Britain.

To make government more efficient, he had divided the empire. A co-emperor ruled the West, and Diocletian ruled the East, whose borders he then secured by defeating the Sassanids, a rival power based in today’s Iran. In 299 AD, he summoned his Emperor of the West to join him in a discussion of the future. Priests sacrificed an animal to read in its entrails what the fates had in store, but they found nothing. They complained that the Christians attending had spoiled the ceremony by deliberately not following the correct form of worship. Diocletian ordered all members of his household to join in religious purification. Christians who did not comply were dismissed, but otherwise not officially persecuted.

Menas continued to serve in the Roman army for another three years in what is today’s Turkey, near the town Cotyaeus (now Kütahya) some 330 kilometres south-east of Istanbul.

In 303 AD, Diocletian resolved on far more terrifying measures to reinforce Roman rule. On pain of torture and death, anyone could be required to prove their loyalty by sacrificing publicly in a rite of religious obedience. Religion and public life were not regarded as separate. Emperors had religious roles and were frequently declared to be gods.

Diocletian’s main targets were non-traditional religions.[5] He first singled out the Manichaeans, whose religion developed in Iran around 230 AD and grew under the Sassanid Empire that Diocletian had recently defeated. Soon, Christians were targeted. Christian churches were destroyed, their property seized and believers who refused to worship the Emperor were killed. The Jews, though they had revolted against Roman rule, were not disturbed in their ancient faith. Christians went into hiding or tried to keep their heads down. Others conformed by making the sacrifice while practising their faith in secret, creating a split in the Christian community that took many years to heal. Menas quit the army about this time. According to the Coptic Church:

As a true Christian, he was not able to witness the abominable sacrificial offerings to the idols and left the army, the town, the people and everything else, and went to a deserted mountain, for it was easier for him to live among the wild beasts than with pagans.[6]

He remained among the beasts for the next five years, during which time Diocletian died, and in 305 his deputy, Galerius, took command of the region in which Menas lived. Galerius was the most severe of the persecutors, while his co-rulers and rivals in West were more moderate.

In the wilderness, Menas had spent his time in fasting and prayer. Then, one day in 309, he heard that people in the town were celebrating a pagan festival, an official occasion, but which could often descend into violent drunkenness and debauchery. He went down into the town of Cotyaeus. He went unarmed. He had not, like some terrorist, sharpened his old sword and gone into the town to kill Romans or those who honoured the Emperor as god. Nor did he urge rebellion. However, in the most public places, he declared his Christian faith, a faithful witness to what he believed and denounced the idolatrous sacrifices and persecutions. (In Greek, the word martyr means ‘witness’.)

He was arrested, and brought before Pyrrhus, the imperial representative, who had Menas tortured. It is said that he was flogged, scraped with iron claws, and burned with torches. Pyrrhus wanted to make him perform the religious act that everyone knew would fly in the face of his religion. He still refused, so the Romans beheaded him and then put the body on a pyre so Christians would not be able to retrieve it. However, some remains were recovered and later transferred to Alexandria, where a church was built over their resting place.

Religious persecution aims to destroy a religion by preventing any public expression of it. If people cannot come together to worship as a congregation, and dare not even speak of their religion to others, it cannot be passed on and will die out. At a desperate time, Menas came not to address the Emperor or his representatives, but the Christians. Doubtless many, if not all, would have publicly sacrificed to the Emperor. Some might have preferred Menas to have stayed in the wilderness and not disturbed their consciences. Some may have admired his courage though, yet remained hidden and silent in fear. However, Menas would have hoped that his own public declarations would re-kindle courage in others and inspire them to keep the faith alive. As it turned out, the persecution stopped about two years later, in 311, and in 321 Emperor Constantine legalised Christianity.

By remaining resolute, Menas defeated his persecutors and, through his death, lived on in the Christian tradition and in the miracles attributed to him over the centuries. Particularly for the Greek Orthodox and Coptic churches, he assumed permanent significance.

Light in the darkness

It was thus not surprising that Greek soldiers saw a vision in the darkness of St Menas at El Alamein, a moment when they could begin to hope their exile from an occupied homeland would eventually be over. Montgomery’s dream remains mysterious, but fits well enough with his ambition  to bring an end  the string of military defeats. Concerning the necessity of martyrs at such moments, Pope John-Paul II, who had seen much religious persecution, said, “martyrs … light up every period of history by reawakening its moral sense.”[7] The world did awaken to the immorality of Hitler’s regime, though many trials, torments and persecutions had still to be endured. This was the meeting point for the unexpected story of St Menas with the story of El Alamein.

The battle opened with Montgomery’s painstakingly prepared massive artillery bombardment, which lit up the night sky. From the victory that followed, it would be Hitler’s turn to face a succession of defeats, the disintegration of his allies and death by his own hand.

One thought on “El Alamein and a Martyr’s Inspiration”

Agatha Christie and the Attempted Murder of the Old Mass

Is July the Cruelest Month?

El Alamein and a Martyr’s Inspiration