Death by Boredom or Warming

A metaphor! We have a metaphor for this campaign. Hold it tightly. Treasure it. For there is precious little on offer elsewhere. The Australian has revealed that Labor’s $37 billion sop to the education unions, sorry, “investment in our children’s future”, will indeed deliver the 2.8% boost to GDP shadow treasurer Chris Bowen promises OECD research shows it can provide – but not until 2095.

Similarly, we still have seven-and-bit weeks – 51 days – to wait until this campaign is over (although, with the way the polls are at the moment, no one can promise a firm result). Which makes it all a bit boring.

The ever ebullient folk at Twitter have been pushing their product mercilessly ever since Malcolm Turnbull drove out  Yarralumla’s gates on Sunday, offering a daily selection of its most noteworthy moments (in their eyes, anyway). They’ve also been kind enough to provide a chart of the three most tweeted moments of the campaign so far, based on appearances per minute of the #ausvotes hashtag. 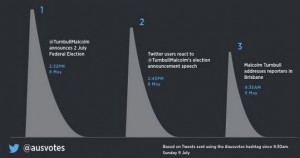 It’s an interesting little graphic (left) – graphic, as one couldn’t call it a graph. While it has an X and Y axis there’s no clear units of measurement. All we can go by is the size of the peaks in ther illustration, and they suggest interest in the campaign collapsed somewhere between a quarter and third in the 19 hours that elapsed from the calling of the poll – most-tweeted moment number one – and the Prime Minister’s first appearance on the campaign trail in Queensland on Monday morning – moment number three.

If the noisy and narky band of obsessive compulsives who comprise the Twitterati are responding this way, what hope is there for keeping the rest of us engaged? True, there’s a leaders’ forum on Friday evening in Western Sydney – in Windsor for once, too, instead of Penrith, just for a bit of variety. But with both the PM and Bill Shorten conserving their ammunition until the final stages of their offensives the most we can expect is a few firecrackers flung around the stage.

Fortunately the Fairfax press has recognised that this campaign is already deathly dull. So they’ve helpfully decided to report something else and decreed that the end of the world is nigh.

“The point of no return is just days away,” the headline reads. “Within the next couple of weeks, a remote part of north-western Tasmania is likely to grab headlines around the world as a major climate change marker is passed,” environment reporter Peter Hannam writes today (it was so much more entertaining when he was the “carbon economy editor”).

“The aptly named Cape Grim monitoring site jointly run by CSIRO and the Bureau of Meteorology will witness the first baseline reading of 400 parts per million of carbon dioxide in the atmosphere, researchers predict.”

There. That will heat things up.