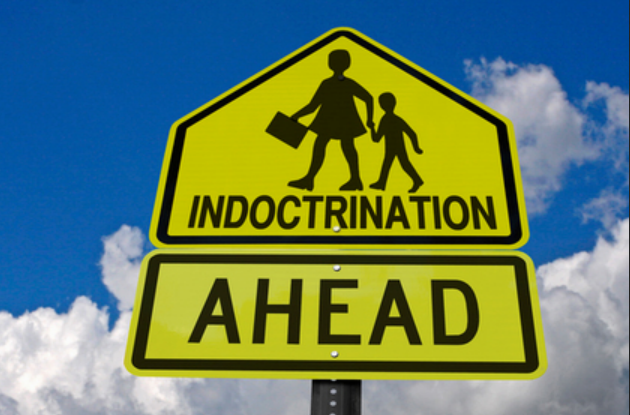 I am going to try to ensure that the next generation of voters in my classroom don’t vote Liberal, without being political of course.

What of the new course Spiritualities, Religion and Meaning? Not one reference, predictably, to Christ, Christianity or church, although there’s  oncer mentions of “Catholic” and “parish”. Also no mention of Buddhism, Hinduism or Judaism. But kids are invited to do

As for “Indigenous” and “Aboriginal” piety: ten mentions.  The draft syllabus includes this bobby-dazzler (page 7 and repeated p21, my emhases):

What sort of people dream up such nasty stuff? First, that the Holocaust and the so-called “Stolen Generations” are comparable and somehow current and thus “urgent moral challenges to spiritualities, religions, and their followers.” Second, indoctrinating kids that Hitler’s industrialised slaughter of six million Jewish men, women and children, was abetted by “religious” people, “even as bystanders”.

Quite an agenda is here at work, when your average kid couldn’t find Poland on a map. These kids are coached that religious Germans, Poles, Hungarians and Ukrainians either played a direct role in the Holocaust or were interested “bystanders”. This has elements of truth but, for heaven’s sake, why push such a peripheral, contentious issue at 16- and 17-year-olds? Isn’t the Holocaust per se a large enough class topic? Let kids assess side aspects later as young adults aware of historical complexities and nuance.

On August 13 I emailed SA Certificate of Education CEO and board member Professor Martin Westwell:

Does SACE endorse this prose for 16-17yos which appears to equate the Holocaust with the so-called “Stolen Generation” and links religious people with Holocaust facilitation?

He replied the same morning (commendably) via his media person, Robert Johnson,

Spiritualities, Religion and Meaning is intentionally flexible to allow students to explore key beliefs, values, and practices of one or more spiritualities or religions.

As with all SACE subjects, teachers design the learning program so that students meet the required standard in a way that’s flexible and appropriate for their context.

Professor Westwell needs a sign on his desk, “The buck stops elsewhere.”

I then asked him about his SACE website saying this material “involved extensive consultation with Religion Studies teachers, leaders and religious education experts from schools, universities and other educational institutions.” My question:

Were religious experts from outside the education sector consulted, in particular were any Jewish authorities consulted?

The SACE Board consulted with a diverse representation of different religious faiths and spiritual traditions, through [external]  faith leaders, Religion Studies teachers, and religious education experts from schools, universities and other educational institutions.

Westwell says Jewish leaders were among those consulted.

I emailed the Liberal’s Education Minister John Gardner to ask if Professor Westwell’s response was satisfactory and what he, Gardner, thought of the Holocaust passage. No reply.

I then emailed Peter Wertheim, co-CEO of the Executive Council of Australian Jewry. He replied ( my emphases):

Section 6 of the draft curriculum for “Spiritualities, Religion, and Meaning” raises questions about how human beings recognise, account for and respond to the existence of evil in the world. Whilst these are appropriate questions for Year 11 and 12 students to grapple with, the questions have been posed in a way that could lead to confusion.

The draft document groups together war, genocide, nuclear armament, the Holocaust, the Stolen Generations and unspecified “other tragedies”, as if they are all of a piece. Yet each of these occurrences belongs to a species all on its own. Each had its particularities, and without understanding those particularities there can be no real insight into the nature and power of the evil that was at work. It does a disservice to the victims and to the survivors in any particular case to suggest that the evil they endured can only be recognised as extreme if it is bench-marked against a common standard that does not exist. Extreme evil takes many unique forms.

As regards the Holocaust, I would encourage the drafters of the curriculum to consult with educators at the Adelaide Holocaust Museum and Steiner Education Centre.

The other problem with the draft is that it seems to assume that the existence of evil poses a challenge only to people who hold spiritual and religious beliefs. Yet many people who hold no spiritual and religious beliefs also seek to find “meaning” in the world. They too make moral judgements. Their morality faces similar challenges when confronted by extreme evil, especially that which is enabled in some societies by mass popular support or acquiescence.  The curriculum should also explore the challenge which the existence of evil poses to secular ethical beliefs.

Whether people confronted by extreme evil become perpetrators, by-standers, victims or heroes has less to do with whether or not they hold spiritual and religious beliefs than with their essential character. That is the lesson of history, and the curriculum should not mislead anyone into believing otherwise.

As for the so-called “Stolen Generations”, let’s get some facts on the table. Contrast the Holocaust’s six million with total Indigenes removed. They show the claim of “genocide” by Sir Roland Wilson, co-author with Mick Dodson of 1997’s Bringing Them Home report, are absurd.

In SA from 1911-20, according to archival researcheers Alistair Crooks and Joe Lane, the numbers of “half-caste” SA children taken from the interior camps averaged only two per year — mainly girls in jeopardy of sexual abuse and venereal disease. And this average included children neglected, orphaned, destitute or willingly given up by a parent. In the 1920s the numbers taken were even fewer. An average two or three per year applies even to the 100-year SA record to 1940. [2]

As for the minutiae of the Holocaust, here’s one fragment to give SACE educators more perspective. Last month I watched the Netflix series on the trials of Ukrainian John Demanjuk, a Treblinka guard. A Treblinka survivor, Pinhas Epstein told the Israeli court a 12-year-old girl somehow emerged alive from the gas chamber crying “I want my mummy”. Guards grabbed her, shot her and threw her into a pit. The survivor said that 40 years on her voice still rang in his head.

SACE’s draft is full of “progressive” memes and loaded questions. Try this:

I emailed SACE and the Education Minister (getting no reply):

Is it policy to minimise references to Christianity and Church of England in religious and other education? Are you concerned that the draft passage fails to mention that the Australian settlement was by Church of England adherents?

Globally, CO2-boosted agriculture is outpacing population and poverty and hunger have been declining since 2000. But SA kids are force-fed that woe prevails:

How do spiritualities and/or religions respond to widespread human and planetary suffering today?

The “suffering” is claimed by SACE with its 104 bureaucrats, who happen to be on average pay of $101,000 notwithstanding COVID. Professor Westwell suffers on only $400,000 a year. How and why the planet per se is suffering, SACE doesn’t say, but wink-wink-nudge-nudge, think CO2 emissions.

As everywhere in schools in poor fellow my country, kids are coached to be horrid know-nothing activists. Via SACE, they are literally marked and graded according to their activist fervor:

♦ develop and apply an initiative designed to generate transformative social change, or call others to action (advocacy), based on spiritual and/or religious values

♦ evaluate the impact and/or possible future implications of their initiative on stakeholders, and reflect on spiritual and/or religious belief as a motivation for social action and transformation.

For a 20-credit subject, the transformative action should be a maximum of 2000 words if written, a maximum of 12 minutes if oral…

Examples of a transformative action include, but are not limited to:

♦ exploring the issue of rising sea levels in a specific location and its impact on that community [15-20cm sea rise in the past century has hardly caused much distress]. Students explore this issue through the lens of one or more spiritualities or religions to understand the implications of rising sea levels from a spiritual/religious dimension. [They might do better “exploring” sea rise by consulting the SA tide gauges.] They initiate change by writing a letter advocating for climate justice [What’s that? Australia’s highest power prices in SA?] to a relevant elected official such as a Minister of Parliament. Students evaluate the efficacy of this form of civic action, and reflect on the spiritual and/or religious principles that underpin student action (Life, the universe, and integral ecology).

Genuine educators should point students to the 1200 drownings at sea[3] after the Rudd and Gillard governments gave people-smugglers their head.[4]  Here’s some more:

Examples of tasks may include:

♦ organising a group to participate in a social-justice event or program at school or in the community [is a student climate strike eligible?]

♦ developing a real or virtual event/ program to advocate or provide support for the work of an organisation [my bet: Youth Climate Coalition/Greenpeace/Extinction Rebellion] or spiritual/religious community

And even more! Kids are invited to make

♦ a speech advocating for higher unemployment benefits, including future predictions regarding youth homelessness [eh?], with justification drawn from Catholic social teaching and/or another spiritual or religious social-justice framework (Community, justice, and diversity).

SA’s secure educators have no idea about downsides of taxpayer-funded “higher unemployment benefits”. In Joe Biden’s America millions are now refusing to ditch their sit-down-money welfare and take jobs, so inflation is running at 4-5 per cent .

evaluating the work of an organisation — such as the Australian Human Rights Commission, Change the Record, or Close the Gap — that works to reduce incarceration and ensure just treatment of Aboriginal people in custody (Community, justice, and diversity). Students consider what further preventative/remedial measures, drawing on social-justice principles from a specific spiritual or religious perspective.[5]

You’re right, the last sentence isn’t grammatical, but we’re dealing with leftist educators here and their “future predictions” etc. Will SA teachers advise kids of research that jailed Aboriginals are safer in custody than jailed whites, let alone that young Aboriginal offenders are safer in jail than they would be in their own violence-wracked communities?[6]

Examples of a “reflective analysis” include:

♦ inviting a guest speaker to reflect on the issue of environmental refugees (Life, the universe, and integral ecology). Students reflect on the theme from one or more spiritual or religious perspectives, and consider strategies for transformative action.

Leftists have a thing about multi-millions of phantom climate refugees. In 2005 the UNEP predicted 50 million climate refugees by 2010. When that year arrived there weren’t any, so UNEP furtively extended its prediction to 2020. Last year there still weren’t any, apart from dud NZ refugee claimants Ioane Teitiota of Kiribati and a married couple from Tuvalu.

It’s not often that leftists’ school brainwashing programs emerge into the light of day. The South Australian Certificate of Education is a case study for the curious. And the state even has a Liberal government!

Tony Thomas’s just-published “Foot Soldier in the Culture Wars” ($A29.95) is available from author at tthomas061@gmail.com or publisher Connor Court.

[1] “A modern, internationally-recognised secondary school qualification designed to equip students with the skills, knowledge, and personal capabilities to successfully participate in our fast-paced global society.”

[2] Voices from the Past: Extracts from the Annual Reports of the South Australian Chief Protectors of Aborigines, 1837 Onwards. 309pp. Hoplon Press, Adelaide. P198-99. [Forward by Tony Thomas].

[4] The kids might also take note that President Biden is now overseeing arrival of 200,000 illegals a month into the USA, many with covid.

[5] There is no reference in the SACE guidelines to the Human Rights Commission’s years of persecuting and ruining innocent students at Queensland University of Technology who commented unfavorably on QUT’s “Aborigines only” computer room. The HRC also trawled for complaints about The Australian’s cartoonist Bill Leak, who died of a heart attack during the furore.

[6] “The death rate of those Aboriginal people on non-custodial orders is approximately twice that of Aboriginal prisoners.”