Taking Notes as the Rot Began 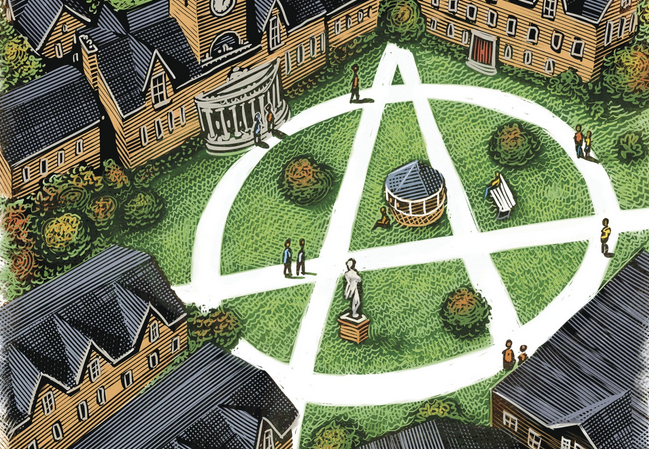 After his work on culture and racism, Jacques Barzun spent his sabbatical leave in 1943-45 on a study tour to “take the temperature” of education across the nation.  “Under every meridian on this continent I have been privileged to attend meetings of the curriculum committee which was, it seemed, sitting continuously from coast to coast.”

Back in his office, his head full of information about the finance, culture and politics of education, he wrote Teacher in America (1945) in burst of energy. This was a tour de force of the challenges and difficulties in the education system, such as the notion that learning has to be “fun”, misguided fads promoted in teacher training schools and the soul-destroying drudgery of the PhD “octopus”.

The preface of the 1981 edition is a mournful reflection on several decades of regression in the public education system, much of it driven by the graduates of the courses in Education which he deplored in the first edition.

Thirty-five years have passed, true; but the normal drift of things will not account for the great chasm. The once proud and efficient public-school system of the United States, especially its unique free high school for all—has turned into a wasteland where violence and vice share the time with ignorance and idleness, besides serving as battleground for vested interests, social, political, and economic.

This “heartbreakingly sad” development flowed from misguided moves to expand the scope of the schools with a wave of additional responsibilities and progressive innovations to promote personal development, citizenship and sociability.

The new product of that debased system, the functional illiterate, is numbered in millions, while various forms of deceit have become accented as inevitable—”social promotion” or for those who fail the “minimum competency” test; and most lately, “bilingual education”, by which the rudiments are supposedly taught in over ninety languages other than English. The old plan and purpose of teaching the young what they truly need to know survives only in the private sector, itself hard-pressed and shrinking in size.

Moving on with his survey of learning in the US, The House of Intellect (1959) explored the influences that distract so many intelligent and educated people from clear, direct and analytical thinking. Intellectuals themselves have been the major agents in the erosion of the life of the mind along with the influence of distorted views of science, and the unhelpful contribution of business inspired by misplaced philanthropy.

He described how well-meaning  foundations and corporations attempt to ameliorate the human condition by funding university-based research and the international exchange of ideas. He noted the impact on departmental budgets when foundations gave short-term grants with inadequate allowance for overheads and the beneficiaries expected to be kept on in perpetuity. Much effort was diverted from serious long-term projects into preparing grant applications to attract funding for “exciting and relevant research” and preparing papers (similarly exciting and relevant!) for international conferences. This reached the level of an art form with conferences organized by the climate-related agencies in the United Nations.

In Science: The Glorious Entertainment (1963), he catalogued and criticised many conflicting and incoherent perceptions of science that are abroad in the land. Some of them exert a malicious influence on the humanities and many of them either trivialising or sensationalising the activities of scientists.

If science students leave college thinking, as they usually do, that science offers a full, accurate, and literal description of man and Nature…if they think theories spring from facts and that scientific authority at any time is infallible… and if they think that science steadily and automatically makes for a better world – then they have wasted their time in the science lecture  room and they are a plain menace to the society they live in.

He next published The American University to describe the tendencies in American higher education as the rapid postwar expansion of universities and colleges strained to breaking point the traditions and disciplines of learning and scholarship. Appropriately it was published in 1968 while students around the world were setting fire to their campuses, including his own. The distraction of the Vietnam war and the threat of the draft were the last straws added to a raft of legitimate student grievances regarding the erosion of teaching by academics whose loyalties were progressively drawn away from the students and the faculty.

A “flight from teaching” started during the New Deal when the administration began to recruit academics in numbers. At first the rotations were short term and positions were only held for one or two years but that condition was relaxed during the war.  After the war the universities and colleges expanded rapidly and at the same time they took on a growing list of “social responsibilities” aided by the foundation funding described above. This lured staff into “exciting and relevant” work outside the classrooms.

This new behavior forced on the academy could be called a species of colonialism on the part of the foundations and the government. With a dispersed, revolving faculty, the institution ceased to have a recognizable individual face…the university lost its wholeness (not to say its integrity) and prepared the way for its own debacle in 1965—68.

Further waves of government regulation and supervision in favour of women and minorities  drove the colleges and universities to employ additional regiments of administrators and the days are beyond living memory when a university could be run by a Bursar and a handful of clerical staff while the faculties looked after themselves.

The mushrooming growth of the sector recruited many young people with no family tradition of higher education and too many of these bright and eager students found that their mentors regarded teaching as a disagreeable chore. Too many of the faculty were absent on foundation-funded excursions to address “problems of Appalachian poverty or Venezuelan finance”.  Scholarship like any other craft is best learned by an apprentice working at the elbow of the master, but with ballooning class sizes there were nowhere near enough scholarly elbows, even at the postgraduate level. The Great Books program which Barzun and Lionel Trilling conducted at Columbia was an outstanding exception where two scholars of international stature worked through the books one by one in small face-to-face seminars. On the bright side, Barzun paid tribute to those who did provide excellent teaching to appreciative students.

Credentialing was becoming an issue for more occupations and professions. As graduates proliferated, additional degrees and especially doctorates became the new minimal requirement for academics and researchers.

For most students…the shift has been from study to qualifying – a new form of initiation congenial equally to the university and to the world, for the world has allowed itself to be academized in all but its manual work.

With that pressure bearing upon them students were not impressed when teachers took leave in mid-semester or left the campus entirely for a better offer elsewhere, missed office hours and generally showed their lack of interest in the chore of teaching. Other corrosive influences were at work with the advance of cultural Marxism and POMO in the humanities and the decline of the classics in the secondary school system.

The hatred of high bourgeois culture was communicated by nearly every contemporary novel, play, painting, or artist’s biography that found a place in the popular part of the curriculum. So the age was past when ‘freshman year’ in a good college came as a revelation of wonders undreamed of, as the first mature interplay of minds.

And so, in 1968, the unresisted protestors took over the campuses, set fires, convened angry meetings and occupied buildings. Some years later Alan Bloom in The Closing of the American Mind documented some of the chaos at Cornell, where he was an eyewitness to disgraceful episodes as agitators introduced firearms to the  campus, intimidated  staff and mobilized the race card as an additional combustible in the mix. Strangely he did not refer to Barzun’s earlier studies.

The violent rebels against boredom and neglect, make-believe and the hunt for credentials never made clear their best reasons, nor did they bring the university back to its senses; the uprising did not abate specialism or restore competence and respect to teaching.

The fires were extinguished but the damage to the morale of the faculty and the integrity of the administration was not restored. The adversarial spirit shifted from physical confrontation to wrangling over rules and regulations in committees and “representative bodies” created to reconcile divergent needs and claims. “Students, faculties, and administrators tried to rebuild in their own special interest the institution they had wrecked cooperatively.”