Wrecking a Nation One Electricity Bill at a Time 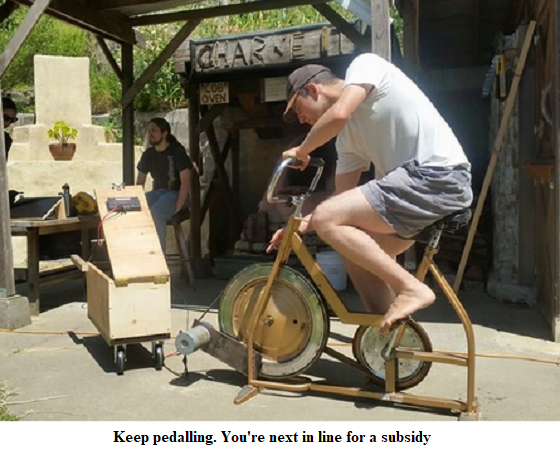 The first thing to recognise is that for many years now governments — Labor and Coalition alike — have been hard at work destroying the low-cost electricity market that Australian businesses and consumers once enjoyed. The second thing to note is that there is an actual undertone of energy realism — yes, really! –about the Albanese government, but it is no portent of good news: “You’ll know what we’re up against when your electricity bill arrives,” the Treasurer said on Thursday (July 28). That would be the bill we were assured during election season would fall by $275 once Labor waved its magic wand.

We can see the degeneration of Australia’s electricity security graphically presented in the chart below which tracks July electricity prices from 2015 to the present day. This year, prices are on average $350 per megawatt hour, a far cry from $50 back in 2015. With subsidies for renewables leading to the closure of crucial power stations they crept up to $85 by 2019, which still seems cheap in comparison with the Himalayan ascent towards $400 that has occurred since 2021. 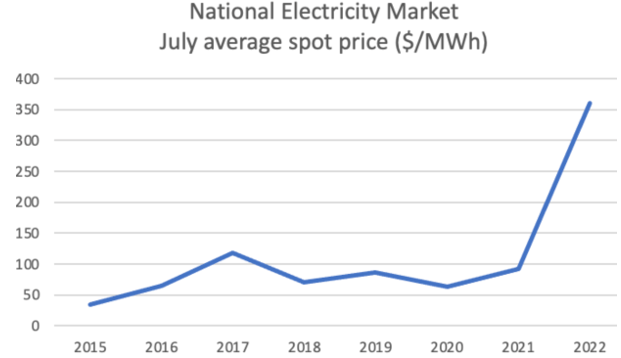 We will not see bills cut. What we will see is a doubling of household bills as the present spot prices work through the retail system. The only thing that can stop this in the near term will be if high prices lead to the closure of major energy users – aluminium smelters, for instance. Oh, the tragic irony!  The pride of the nation’s industrial base now needs to be supported by the very governments whose policies brought the high electricity prices that wrecked the economic viability of their operations.

Of course, while closures of heavy industries’ energy users would give some price relief to household bills in the short-term, what such a measure really means is de-industrialisation and, as a result, permanently lower living standards. In the long term, we can mend the supply only by ceasing to discriminate against low cost coal and, possibly, nuclear.

As in Europe and US, Australian politicians have remained resolutely  blind to the fact that the presumed “cheapness” of the wind and solar they promote hangs on their ongoing need for subsidies. We are already spending at least $7 billion a year on wind/solar subsidies and the ALP policy is to markedly increase this. Their proposed measures include:

♦ a fourfold increase, from $20 billion to $80 billion, in the cost of transmission by which electricity is moved around the nation — an increase required because of the less dense electricity represented by wind and solar;

♦ forced reductions in agricultural emissions – that might extend to suppression of nitrogenous fertiliser use, a measure that has cut Sri Lankan farm output by a third, bankrupting that country, and where the introduction of similar policies in the Netherlands is causing massive turmoil. Canada, too, has poised to join this march of folly and has announced forced reductions in these fertilizers’ use.

♦ on top of all the above, we are to have subsidies for electric vehicles, thereby encouraging a further massive drain on the grid

This madness is not confined to Australia. The Biden administration as soon as it hit the decks started cancelling gas exploration rights and pipelines, announced massive new renewable subsidies and , on top of all that, legislation that will force businesses to adopt costly new environmental standards.

There is now some realisation in the UK of the problems this has caused, with both contenders to replace Boris Johnson each saying they want to reduce taxes on electricity, a proposal that will do nothing more than paper over some cracks. Bear in mind that UK electricity prices have already doubled this year.

Another response is to try rejigging the electricity market. The UK government intends to have suppliers paid according to their bids rather than the market price. It’s a bit more paper on another growing crack, as all this measure will see is a change in bidding strategies with no impact on price and a considerable increase in administrative resources.

The vulnerability of continental Europe, due entirely to abandoning stable supplies of electricity and subsidising wind and solar, is dramatically evident in the crisis confronting Germany, Italy and other countries, a long-brewing crisis explosively triggered by Russia’s denial of a stable gas supply. Few politicians understand the real reasons for the crisis: replacing stable and low-cost fossil fuels and nuclear power with wind and solar. Like a drunk driver speeding the wrong way down a freeway, they spare not a spoken word or thought for the catastrophe just ahead.

France, at least, has abandoned its own green policies and is returning to nuclear power. In Germany’s case efforts to avert disaster remained dogged and hobbled by green fantasies, with the energy minister seeking to continue closing the three nuclear power stations that remain in operation. The excuse, a spurious one, is a lack of fuel rods.

Make no mistake, hardship during the northern hemisphere’s coming winter is inevitable. After that, as the world  tilts, it will be Australia’s turn and that promise of $275 annual saving will be an even bigger sick joke than it is today.