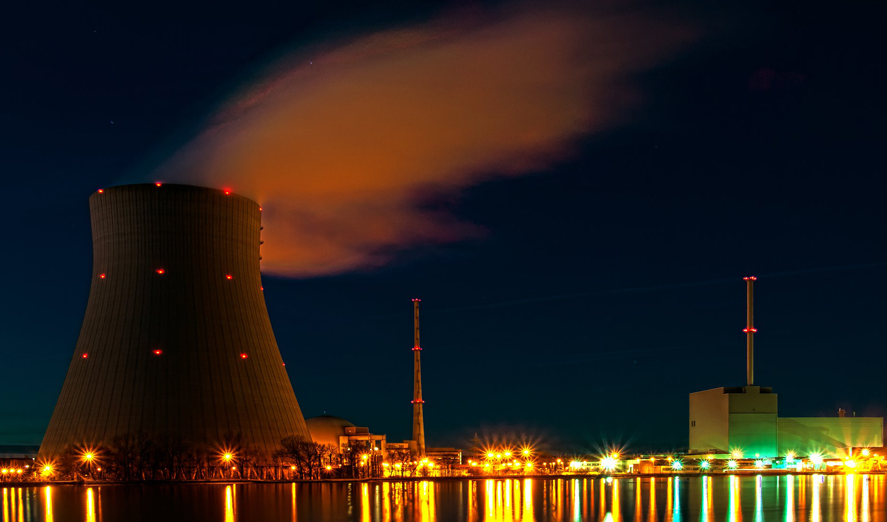 Australia faces an energy crisis, particularly in electricity. The public debate is shockingly bad. Climate change catastrophists demand impossible emissions-reduction targets and a rapid transition to a renewables-only energy system. Now in opposition, some Coalition supporters say we should consider nuclear energy. Yet a realistic assessment reveals that fossil fuels will necessarily be a major part of our electricity generation mix until at least the 2040s.

Zali Steggall, member for Warringah, writing in the Australian on 23 June, claimed ‘We can replace baseload power by combining natural climate variability between zones with storage.’[i] She supports Labor’s Rewiring the Nation plan to add new transmission lines to connect renewables from across the country. In addition, she wants a new renewable-energy storage target, along the lines of the renewable-energy target, to drive storage investment.

To assess this approach, I’ll look at the work of renewables engineering group at the Australian National University, led by Professor Andrew Blakers, that goes by the name ANU RE100. This is because the ANU RE100 modelling is often cited in submissions and advocacy, and influences commentary. Professor Blakers has long been a renewables-only advocate and endorsed the Greens 2022 renewable energy plan, Powering Past Coal and Gas.[ii] It’s the kind of work that gives academic respectability to the claims of the Greens, the Teals, and other renewables-only advocates like Tim Flannery.

The ANU RE100 group models several 100 per cent renewable electricity scenarios based on a backbone of high-voltage, direct current (HVDC) transmission lines.[iii] These connect geographically dispersed renewable energy zones and off-river, pumped-hydro storages to the major load centres such as our capital cities. Variations include the integration of local domestic and electric vehicle storage battery capacities. It concludes that a 100 per cent renewable electricity grid is technically feasible and can deliver a levelized cost of electricity in the range of $70-$90 per megawatt-hour (MWh), depending on the scenario. 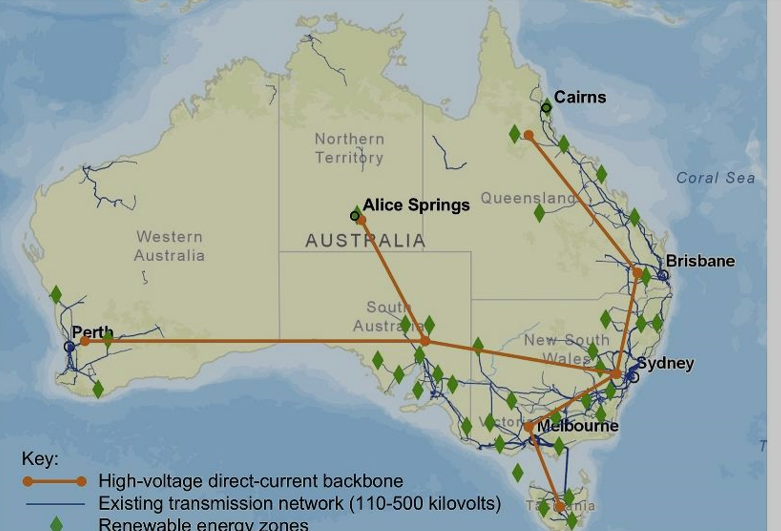 But this system does not exist outside the models and publications of the ANU RE100 group. The 7,000km (or more) of the HVDC backbone is not on any drawing board and has not been subjected to any kind of cost-benefit analysis. Considering route options and getting approvals for such a HVDC backbone, financing, constructing, and commissioning it would take many years, probably decades. It is hard to see anything like it being in place before, say, 2040 at the earliest. The ANU RE100 group thinks it could be built for $320 per megawatt (MW) per kilometre. In the real-world, the 900km NSW-SA interconnector rated at 800 MW is estimated to cost $2.3 billion. That’s $3,194 per MW per km, an order of magnitude higher than the ANU RE100 cost assumptions. At that price, a 3,500 MW backbone of some 7,000 km, say, would cost about $80 billion. That’s about four times the value of our current transmission network.[iv]

Similarly, little of the 32 GW/434 GWh off-river, pumped-hydro storage involved in the ANU simulations exists. For comparison, Snowy 2.0 is 2 GW/175 GWh of storage. The ANU RE100 modelling assumes the pumped-hydro storage can be had for $70/kWh of energy capacity. In the real world, the off-river, pumped-hydro project at Goat Hill in South Australia is estimated to cost $410 million for 1,835 MWh of storage.[v] This works out at $224 per kWh, more than three times the ANU RE100 assumptions. The amount of storage involved in the ANU RE100 models would require 236 equivalent-sized projects at a cost approaching $100 billion. But according to the green shills at RenewEconomy there are only 20 pumped-hydro projects currently on the drawing board in Australia. Only three are in operation, and two in construction, one of which is Snowy 2.0. The other 15 are at various stages, including waiting for government funding.[vi]

In a few words, the ANU RE100 scenarios involve massive transmission and storage infrastructures that don’t yet exist, could not realistically be completed before 2040 at the earliest, and would be much more expensive than they claim. Such work has mis-informed public debate by backing with all the apparatus of research and peer review the fantasy of a rapid transition to a totally renewable, reliable, and affordable electricity grid. It’s led to a situation where Anna Collyer, head of the Energy Security Board, is now seeking to adjust expectations, telling the Sydney Morning Herald on 7 June that switching the power grid from relying on coal to clean energy is a ‘mind boggling’ challenge the scale of which is difficult to explain.[vii]

Now in opposition, some Coalition MPs and supporters say we should consider nuclear energy if fossil fuels are ruled out because of their emissions. Opposition Leader Peter Dutton told ABC radio on Monday, June 6, he was “not afraid of having a discussion on nuclear”.[viii] This is a welcome development, yet it we need to be realistic. The International Atomic Energy Agency (IAEA) says

Experience suggests that the time from the initial consideration of the nuclear power option by a country to the operation of its first nuclear power plant is about 10–15 years.[ix]

THE IAEA promotes its “Milestones Approach” to assist countries considering nuclear power. Phase 1 is a pre-feasibility study to help establish a strong national position and answer the key question: why nuclear? The outcome of this phase is a decision to include nuclear in a national energy strategy. Phase 2 is preparatory work to establish the legal and regulatory frameworks, the key organisations (such as a nuclear power implementation agency), and to do the preparatory work prior to contracting and construction. Phase 3 is contracting, licensing and construction of a nuclear power plant and commissioning it into operation.

A case study is the United Arab Emirates (UAE). Its 2008 policy on nuclear energy was intended to address escalating electricity capacity requirements. Coal-fired power was rejected as the UAE would have to import the coal, an energy security risk, and because of environmental concerns such as the carbon dioxide emissions. Nuclear power, on the other hand, “emerged as a proven, environmentally promising and commercially competitive option which could make a significant base-load contribution to the UAE’s economy and future energy security”. After considering various reactors and suppliers, the UAE selected a Korean-led consortium to build four APR1400 reactors at one site, Barakah, on the Gulf coast in the western part of the UAE. The value of the contract for the construction, commissioning, and fuel loads for four units was about US$20.4 billion (A$30 billion), and the consortium also expects to earn another US$20 billion by jointly operating the reactors for 60 years. The UAE expects the nuclear-generated electricity to be about a quarter of the cost of gas-fired generation.[x]

According to the IAEA, around 30 “newcomer” countries are considering developing civil nuclear power generation. Bangladesh and Turkey are next in line, building their first power reactors with commissioning of both planned for 2023. In Egypt, a construction licence is pending for the country’s first nuclear power plant, with an eye to commissioning by 2026.

Australia, the only G20 country without civil nuclear energy, will soon be behind a lot of once-developing countries adopting this technology. The reason is that, since the anti-nuclear weapons protests of the 1970s, nuclear power has been effectively criminalised. It was literally banned in Australia under the Environmental Protection and Biodiversity Conservation Act 1999 in a deal John Howard’s Government did with the Democrats in the Senate to pass the Goods and Services Tax. Critical for Australia is the absence of one of the four key elements Mohamed Al Hammadi, CEO of the Emirates Nuclear Energy Corporation, says make its program possible: “robust community support”.[xi] Developing that support for an Australian nuclear power program is at best likely to take some time – say at least five years. Add the IAEA’s 10 to 15 years to work through its Milestones Approach and it’s hard to see Australia operating a nuclear power station before the 2040s at the earliest.

Some advocates for nuclear energy in Australia are pinning their hopes on a new generation of Small Modular Reactors, each delivering several hundred megawatts of output. These are to be mass produced in factories to standardised designs. It is claimed they can be deployed more quickly, cheaply, and flexibly than the large, nuclear power stations that have been the basis of the industry to date. Companies in several countries are working on designs, but only one prototype SMR, in Russia, is operating. Another prototype is due to be built in China in 2026. In the UK, a Rolls Royce-led consortium aims to build 16 SMRs, each with a generation capacity of 470 MW. The first unit is intended for operation in the early 2030s, with up to 10 by 2035. The target cost for each station is £1.8 billion (A$3.2 billion) by the time five have been built, with further savings possible.[xii] There is little prospect of Australia getting an SMR before the 2040s at the earliest.

We can conclude that neither a 100 per cent renewable electricity system, nor one underpinned by nuclear power, are realistic options until well into the 2040s at the earliest, if ever. Consequently, fossil fuels will be part of our electricity system for now and for many years to come. They currently provide some two thirds of our electricity, which can reduce over time as other generation, transmission, and storage is built. Meanwhile, we must stop the demonisation of fossil-fuelled generation if we are to keep the lights on.

11 thoughts on “The Demonising of Good Sense and Sound Policy”