Disaster Obvious, Even Through a Green Haze 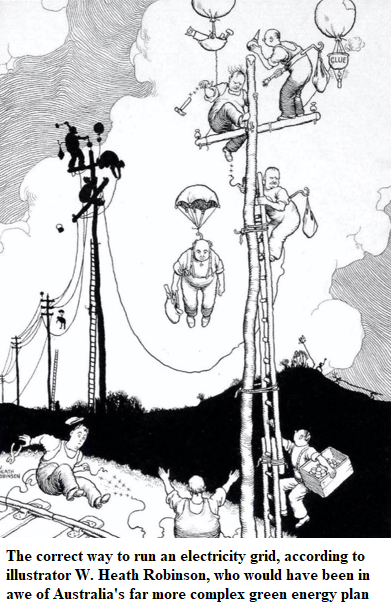 Are you still willing to give the time of day to those impassioned to the point of madness by a desperate yearning to save the planet from an imminent and fiery end? Me, not really. Yet inexplicably, dutifully and intrepidly, I found myself perusing the six-page executive summary of AEMO’s “2002 Integrated System Plan,” released on June 30. Though admittedly, I haven’t yet managed to amass the resolve to read or even skim all 104 pages. The flesh is weak.

The plan follows an earlier draft and the consultation which followed. For those not in the know: “This plan is for a true transformation of the NEM [National Electricity Market] from fossil fuels to firmed renewables.” For the avoidance of doubt, the goal is net zero by 2050. Take a deep breath and consider its broad constituent elements. It’s complicated but I reckon I’ve got it mostly right.

The headline is that a “nine-fold increase in utility scale variable renewable energy capacity [read, wind and solar farms by 2050] and a near five-fold increase in distributed solar photovoltaics [read, panels on roofs]” will be required “as homes, vehicle and industrial applications switch to electricity from existing energy sources.”

According to the plan, “renewables generating 83 per cent of NEM energy by 2030-31,” is foundational for planning investment. It was 27 per cent in 2020-21. Apparently today, the NEM delivers just under 180 TWh per year. AEMO predicts that 320 TWh will be required by 2050. Suppose then it’s 200 TWh required by 2030-31. A little arithmetic shows that renewable energy (RE) will need to grow its per-year contribution by about 117 TWh.

Based on European figures, the average turbine provides 6 million kWh in a year (i.e., 6000 MWh or 6 GWh or .006 TWh). This means that the equivalent of almost 20,000 turbines will need building in the next 8 years or so. To give a rough sense of the task, I reckon, based on generating capacity figures, that we now have about 4000 turbines a-whirling, maybe a few more. I found the exact number hard to find. It doesn’t matter. It’s clear that a massive amount of new RE has to be put in place in short order. And, remember, commensurate so-called firming (see below) must also be put in place.

Unrealistic. You got it. Maybe the Teals can help?

By the way, this required massive increase in RE by 2030-31, and then more beyond, doesn’t include the electricity requirements to fulfil the wet dreams of Andrew Forest et al. Namely, the massive production and export of “green hydrogen”. That would be extra, a lot extra.

In the main, wind and solar farms will be built in Renewable Energy Zones (RZEs). These we are told “have the potential to foster a more holistic approach to regional employment, economic opportunity and community participation that may lead to greater local fulfillment of NEM’s supply chain needs.” Welcome to our RZE, locals will say in greeting tourists in the future green nirvana. Meanwhile, I predict local objections gathering pace as the full impact of becoming an unsightly green-electricity, albeit holistic, community drives home. We shall see.

However, according to AEMO, coal now provides over half of the existing firming capacity. So, sans coal, firming capacity has to increase by more than six times. And, to boot, this pollution-free paradise ahead allows no backsliding. We are told that the polluting effect of natural gas in the firming menu will need to be offset elsewhere or, eventually, be replaced with green hydrogen and/or biogas. The plot gets ever thicker.

I assume the required amount of firming has been modelled. I don’t trust models. Neither should you. Whichever way it’s obfuscated, VRE requires 100 percent firming. When power is primarily and solely dependent on VRE, another power system must be maintained on standby of equal capacity; ready always to provide dispatchable power in case of need. This is not a matter of engineering. It is a matter of simple logic. Unsurprisingly, logic isn’t the strong suit of the climate cult.

We will need two power systems, side by side, to do the job that one used to do effectively and cheaply. Seems like madness? Can’t be. Among others, Prince Charles, David Attenborough, Greta Thunberg, John Kerry, Anthony Albanese, Matt Kean, most corporations and unions, and a majority of Australian voters are onboard.

Connectivity and electricity go together. This is appreciated in the plan, which calls for “more than 10,000 km of new transmission to connect geographically and technologically diverse, low-cost generation and firming.” To make things more challenging it will be necessary to “adapt complex networks and markets for two-way electricity flow.” Incidentally, this is all to be done “efficiently” at “low cost and low regrets for consumers.” Why this assurance to quieten concerns, you might ask? Surely, government projects are always delivered on time, on budget.

We are told that “when successful, the transformation of the NEM will deliver low-cost renewable electricity with reliability and security, and help meet climate targets, and contribute significantly to regional jobs and economic growth.” I got tied up with the qualification “when successful.” Indeed, if and when.

In your mind, connect up and graph the various components of the new promised electricity system. Have far-flung wind farms, onshore and offshore, and solar farms connected to the grid. Have firming stations comprised variably of commercial super batteries, natural gas, green hydrogen, biogas, pumped hydro; have two-way connectivity between homes, electric car batteries and the grid. Include the import of essential equipment, components, spare-parts and materials from China and elsewhere. Include the heavy-duty transmission of electricity to electrolysis plants; desalination plants to produce the water required for electrolysis, and the conversion of hydrogen to ammonia for safe transport to gas generators. Don’t forget provisions for industries to be forced to so-called load shed; i.e., to curtail their power usage when things get tight on cloudy windless days. Note the need to stand ready to advise householders to ration their power usage by shutting off appliances and postponing dishwashing till late at night.

Now think of a single coal-power station, needing no adornments nor add-ons, delivering sufficient and reliable cheap power 24×7. Can’t say we haven’t been warned. The plan lays out the full complex unworkable mess in front of us; guaranteeing expensive uncompetitive power and blackouts. It’s no consolation that it won’t work. Fanatics are in charge. It will be pursued until the damage is irreversible this side of current generations.

16 thoughts on “Disaster Obvious, Even Through a Green Haze”

Climate science in a Styrofoam cup