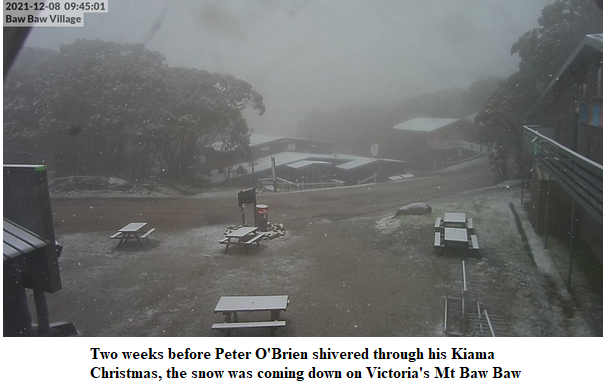 A couple of weeks ago, I was dreaming of a white Christmas.  Admittedly, in Kiama on the coast just south of Sydney, it was pretty long odds, but sitting on my deck on Christmas Eve wearing a sweater and with the heater on, I hadn’t given up hope.  After all, with all this climate change going on, why not. Alas, it was not to be.  Christmas Day dawned almost perfectly.

Today I’m back in my winter track suit.

However, the general weather we have been having prompted me to think about Catastrophic Anthropogenic Global Warming.  Yes, we have a La Nina, keeping us cool and wet at the moment, and this is a natural event – as the catastrophists will no doubt point out.  It doesn’t of itself disprove catastrophic warming, they will say.   The warming is there all right – it’s just being masked by La Nina, they will insist.

The same thing happens when the northern hemisphere gets record snow dumps, which they seem to have had regularly over the past few winters.

All of these events are triggered by oceanic drivers but at some point, if CAGW is as catastrophic and as imminent as the alarmists claim, they too must be subsumed by the heating atmosphere.  We are obviously not yet at the point where even man’s irresponsibility and selfishness can totally eliminate such massive natural phenomena.  But surely, by now though, they should at least be somewhat noticeably diminished, as to both frequency and severity?  Not from where I’m sitting.  This summer is the coldest and wettest I can remember for many years.

But cartoonist Jess Harwood at The Guardian doesn’t see it that way, telling us that this is the hottest La Nina on record.  That’s a bit of poetic licence.  It sounded an odd claim to me so I checked it out.  Turns out it’s not the hottest La Nina on record at all.  It’s apparently the hottest La Nina year on record.   Actually, its only the sixth- hottest year on record.  Well, that’s according to our trusted friends at NOAA and our very own BoM.  And we know how rigorous their science is.   This is a year in which Antarctica recorded its lowest-ever temperature reading and in which snowfall in the northern hemisphere also reached record proportions.  Larry Hamlin, at Watts Up With That provides a well-argued counter to this claim by NOAA.

So how long will it be before CAGW blocks La Nina from sending us our traditional flooding rains?  When Tim Flannery told us ‘even the rain that falls isn’t going to fill our dams and river systems’,  what timeframe did he have in mind, I wonder?

The BoM has a Climate History – Rainfall page which displays a montage of maps of Australia since 1900 showing rainfall.  If you look at that page as a whole, you will see that blue tends to dominate in the second half of the 20th century and the 21st century.

The Twelve Days Of Christmas