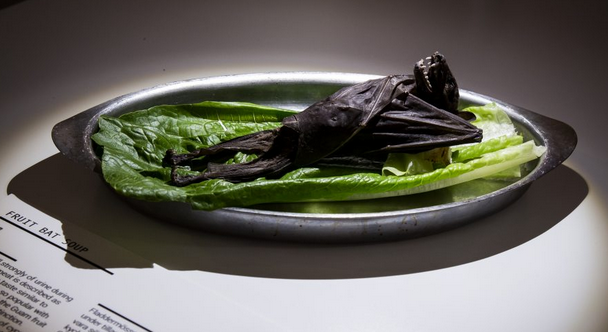 We live in an age where Climate Change™ has replaced God as the explanation for everything. The list of phenomena it allegedly causes grows ever longer. More and more young people seem to be coming down with climate anxiety and ecological distress. In a recent survey led by Bath University, UK, over half of ten thousand respondents between 16 and 25 believe they are doomed and have no future.

The twenty-sixth United Nations annual climate Conference of the Parties (COP) is only weeks away.  After a quarter of a century of concern and another two billion people on the planet, is it too late to save us from a french-fry fate? Given the sombre mood, an attempt to link climate change with the COVID pandemic was inevitable. As if on cue, a “short communication” appeared in May this year in Science of The Total Environment, Volume 767:

“Shifts in global bat diversity suggest a possible role of climate change in the emergence of SARS-CoV-1 and SARS-CoV-2”.

The three authors: Robert M Beyer and Andrea Manica (Department of Zoology, University of Cambridge, United Kingdom) and Camilo Mora (Department of Geography and Environment, University of Hawai’I, Manoa). Beyer has since taken up a European research fellowship at the alarmist Potsdam Institute for Climate Hysteria Impact Research. They argue that bats are the likely zoonotic origin of SARS-CoV-1 and SARS-CoV-2. The local number of coronaviruses is said to correlate with “bat species richness”, with climate change shifting the global distribution of bats. This “bat richness” has strongly increased the likelihood of SARS-CoV-1 and 2 outbreaks; hence climate change may have been an important factor in these outbreaks.

Here we show that the southern Chinese Yunnan province and neighbouring regions in Myanmar and Laos form a global hotspot of climate change-driven increase in bat richness. This region coincides with the likely spatial origin of bat-borne ancestors of SARS-CoV-1 and SARS-CoV-2. Accounting for an estimated increase in the order of 100 bat-borne CoVs across the region, climate change may have played a key role in the evolution or transmission of the two SARS CoVs. (R M Beyer, A Manica and C Mora, 2021)

A simultaneous media release showed how keen the authors are on climate change playing a bigger role in the COVID drama. Surely it too should be addressed “as part of COVID-19 economic recovery programmes.”

Understanding how the global distribution of bat species has shifted as a result of climate change may be an important step in reconstructing the origin of the COVID-19 outbreak.  (Dr Robert Beyer)

The fact that climate change can accelerate the transmission of wildlife pathogens to humans should be an urgent wake-up call to reduce global emissions. (Professor Camilo Mora)

According to Dr Beyer, climate change over the last century in the southern Chinese Yunnan province made it more suitable for bat expansion. A lot can happen in a century. How did the researchers measure vegetation and “anthropogenic land-use” changes – and calculate the increase in bat species – with meaningful precision?

It is important to note that our inference that climate change may have played a role in the outbreak relies on future evidence remaining supportive of the suggestion made based on the genetic evidence available to date that the ancestor of SARS-CoV-2 was bat-borne and occurred in the Yunnan province or the neighbouring regions. Furthermore, the methods used here to simulate vegetation and to map bat ranges are not without uncertainties and limitations (Beyer and Manica, 2020; Hallgren and Pitman, 2000)……..

The authors briefly mention other possible influences, such as the “expansion of urban areas, farmland, and hunting grounds into natural habitat”. What if the key driver here was not climate change and increasing bat numbers, but the reverse: expanding human numbers driving more species interaction over the past century, the period considered in the above paper? According to demographers, China’s population increased from about 400 million in 1900 to 1, 283 million in 2000. Today it has 1,395 million people, about 20 per cent of the global population.

As the world now accepts, the first COVID outbreak was in Wuhan, capital of China’s Hubei province. In December 2019, SARS-CoV-2, a “novel coronavirus” later identified as the cause of COVID-19, was discovered in patients here. What is – or was – less certain is why, and particularly how, the outbreak happened there. Was it connected to the Huanan live-animal “wet” market, site of the first infections and China’s preferred explanation? Or was it the connect-the-dots case that the Wuhan Institute of Virology (WIV), where they have been studying coronaviruses in bats for over a decade, somehow set loose a genetically amended virus to roam the world. WIV is just a 40-minute drive from the market, the two sites also being linked by a direct subway connection.

But let us set aside the evidence of a lab leak and look instead at the more general aspect of a growing population’s encroaching on nature. Wuhan’s population is about 11 million. In 1950, it was one million. There are 50 million people in Hubei province, twice Australia’s population. Population growth on Wuhan’s – and indeed China’s – scale has increased demand for protein, encouraged expansion of industrial-scale animal farming, and wet- and live-animal markets. It has driven people and animals — including bats — closer together, increasing the risk of zoonotic diseases. Three out of four new or emerging infectious diseases come from animals.

Researchers recently interviewed by the BBC’s Roland Pease in COVID origins: The science all supported a “zoonotic spillover” origin for COVID.

According to geneticist, Michael Worobey, the Huanan market was “stuffed with wild animals just before the pandemic, including species known to be susceptible to infection”, such as ferret badgers and porcupines (31 min.).

Here we document 47,381 individuals from 38 species, including 31 protected species sold between May 2017 and November 2019 in Wuhan’s markets. We note that no pangolins (or bats) were traded, supporting reformed opinion that pangolins were not likely the spillover host at the source of the current coronavirus (COVID-19) pandemic.

While we caution against the misattribution of COVID-19’s origins, the wild animals on sale in Wuhan suffered poor welfare and hygiene conditions and we detail a range of other zoonotic infections they can potentially vector. Nevertheless, in a precautionary response to COVID-19, China’s Ministries temporarily banned all wildlife trade on 26th Jan 2020 until the COVID-19 pandemic concludes, and permanently banned eating and trading terrestrial wild (non-livestock) animals for food on 24th Feb 2020. Source:  Animal Sales from Wuhan wet markets immediately prior to the COVID-19 pandemic.

Pease also interviewed zoologist Peter Daszak, president of EcoHealth Alliance. Daszak investigated the initial COVID outbreak in Wuhan and was a member of the WHO team sent to China to try and establish its origin. Worth noting is what might be seen by some — indeed, many — why Daszak would be keen to direct investigatory  curiosity away from the Wuhan lab.

Pease: Peter Daszak’s team just completed a measurement of how often viruses pass from bats to humans in the natural course of things and the numbers are stunning.

Daszak: We found some antibodies to bat coronaviruses in people in rural China prior to the outbreak. It was quite high: three per cent of people in a village. They were probably infected two or three years ago. We estimate that more than 400,000 people a year are infected by bat coronaviruses, excluding the numbers in wildlife farms and markets. They are people directly exposed to bats because they fly over them at night or they live near a bat cave.

Daszak: Yes, infected with SARS-related coronaviruses. It’s a very specific – obviously high-risk group of viruses. Break it down. Four hundred thousand people infected a year. A few thousand people are getting infected every day, today, right now, somewhere in south-east Asia. They are outbreaks that never get diagnosed because people think its pneumonia or flu. (@36min.)

Pease: If this work is right – it has not been peer-reviewed – then day-after-day SARS-like coronaviruses are knocking at our door. If it happens in a village, it might go no further. In a great city like Wuhan, however, there is a one-in-three chance of it taking hold. Nature is replete with viruses looking for a chance to infect a new host. (@ 37 min.)

COVID’s origins, arguably, have less to do with climate change, and much more to do with what virologist Angela Rasmussen calls “the biohazard in Nature”, and the increasing numbers of people consuming, interacting with, or living near animals, birds and bats in China and elsewhere.

Or living near the Wuhan lab.

And the good news is…