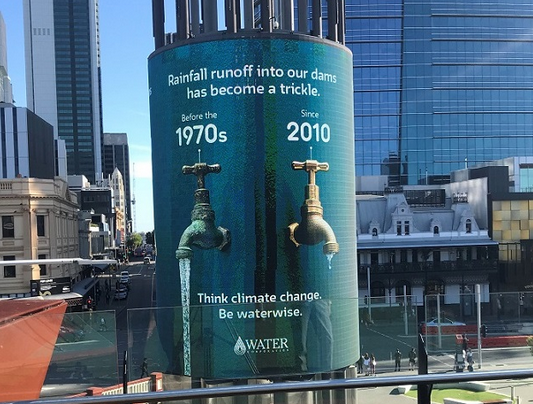 Not a day goes past without ‘climate change’ being named as the culprit responsible for this or that hot day or cold day, bushfire or flood, mouse plague or koala die-off. It’s the universal explanation, supported by seemingly authoritative stats, charts and, once rendered as a press release, repeated and amplified by the mainstream media, whose reporters and editors come in only two varieties — the gullible and the activist, neither of which is mutually exclusive.

Western Australian authorities, by their efforts to blame climate change for reduced water flows into Perth’s dams, provide the basis for a case study on the way in which the climate-change option is the first choice and favoured option to dismiss a wealth of other factors up to and including mismanagement.

Frank Batini, an Adjunct Professor ( Environmental Sciences ) at Murdoch University and Chair the Centre of Excllence for Climate Change Woodland ad Forest Health, took a closer look at the numbers. The fruits of his curiosity are below. — rf

If we wish to compare current observations with past performance, we need to establish a set of relevant data, or baseline. The baseline selected by the Water Corporation of Western Australia for rainfall and streamflow comparisons in WA is the period 1911-1975.

Since the 1970’s “climate change”, attributed to rising levels of carbon dioxide and other greenhouse gases, has been promoted as the cause of lower rainfall, of falling water-tables, reduced stream-flow and the collapse of vegetation in the forested water catchments of the  state’s southwest. Worldwide reduction in carbon dioxide levels in the atmosphere is usually offered as the only solution.

In a large advertisement in the Weekend West newspaper earlier this month (12/06/21), the Water Corporation claims that “Perth’s rainfall is declining due to Climate Change”. The advertisement includes a graph of reduced stream-flows into the reservoirs of the Perth hills, insisting this is convincing proof that “Climate change is real”.

A thorough analysis of rainfall must use all of the available data sets, not only those since 1911. I have reviewed BOM rainfall data for Jarrahdale, located close to the catchments of the Wungong and Serpentine dams, from 1882.  This sequence provides an additional 29 years of rainfall before 1911, allowing me to calculate an average annual rainfall for Jarrahdale of 1177 mm. Annual variability is very wide, ranging from 607 to 2169 mm/pa.

The data show a natural, long-term cycle in rainfall for Jarrahdale. I have observed similar trends 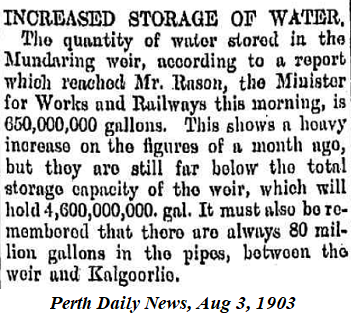 in BOM records for other locations.

The several very dry years recorded before 1911 at Jarrahdale cannot be attributed to “climate change” as the term is used these days.  Interestingly, the sequence of dry years around 1900 led to concerns that the newly constructed Mundaring Weir was not filling (right)  as fast as expected. Five thousand hectares of forest were felled or ring-barked to enhance streamflow, resulting in increased salinity and sedimentation.

The graph below shows the BOM data for Jarrahdale, 1882-2013, when the location of the rain gauge was  changed.

Dendrochronological data has been collected by researchers at the University of WA on tree rings at Lake Deborah in Western Australia (O’Donnell 2021). These reveal evidence of cyclic trends in rainfall with several multi-decadal very dry periods extending back well before European settlement.

The authors of this study conclude that the first half of the 20th Century was the wettest period since 1350 AD. 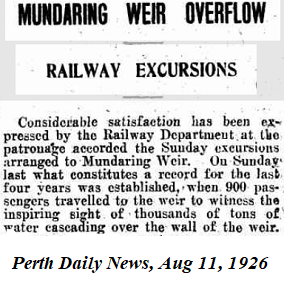 baseline was unusually wet. There were a number of observable outcomes from these wet conditions, including changes in catchments, forests and farmland.  The dams in the hills filled and some overflowed. One of them, the Harvey Weir, reached a point of potential collapse in 1964 leading to the evacuation of the town. There was extensive waterlogging and associated Phytophthora disease impacts in the jarrah forest, especially in gully-heads, and invasion of high-quality jarrah sites by bullich (Eucalyptus megacarpa), a species that prefers water-gaining sites. There was accelerated erosion, rising water tables and increased salinity in farmland and damage to infrastructure in several wheatbelt towns.

There have been many changes to the forested water catchments of the jarrah forest during the past 150 years. These include extensive and repeated logging/regeneration which has changed the structure and age-class of the forest; large-scale bauxite mining which has converted thousands of hectares of forest into dense rehabilitation; wildfire and prescribed burning; and eucalypt decline associated with Phytophthora disease.

Research by various agencies has shown that younger, smaller trees transpire at about twice the rate of older-growth, meaning less water makes it into catchments, and that about half of the reduction in stream-flow in recent decades is the result of changes in vegetation (Liu 2019). On the other hand, when overstocked stands of trees are thinned, there is a significant increase in streamflow for several years. For various reasons (including  ideology) wide-scale thinning of regrowth jarrah forests does not occur, despite the water supply and environmental benefit that would follow.  On-going, professional management of WA’s forested water catchments with a view to optimising forest health and water yield is required.

The WA Water Corporation’s streamflow data into dams are shown to commence in 1911. However none of the major dams feeding the city of Perth were operational before 1940, when Canning dam was completed. The pre-1940 inflows are inferred by mathematical modelling based on rainfall and once-daily measurement of flow at a few sampling sites. A more extensive system of continuous stream monitoring was not established until the mid-1960s. The inferred data may well be inaccurate or, at the very least, have a large error term.

Domestic water consumption in WA has increased markedly with population growth since 1911. Efforts by the Water Corporation to make Perth’s water supply less dependent on annual rainfall are sound. They have encouraged water conservation, developed two sea-water desalination plants, and have injected treated water into aquifers. However, their assertions of a direct link between rainfall, streamflow and “climate change” are unsubstantiated and misleading. I have contacted Corporation and its board on several occasions and offered to meet and discuss this issue, but my offer has not been taken up.

Another major concern is that most of the research and monitoring of ecosystems and catchments in the south-west forests of WA has been done since the 1960s and has revealed a “receding tide”: falling water-tables, reduced streamflow, declines in aquatic biodiversity and tree health. But the fact that these changes have occurred against a baseline of a long and unusually wet period in the rainfall cycle is mostly ignored by land managers, water supply bureaucrats and scientists.

8 thoughts on “Climate Change, the All-Purpose Excuse and Villain”

Are we going under?

How to Get Ahead as a Celebrity Scientist