The Stoic Endurance of Peter Ridd 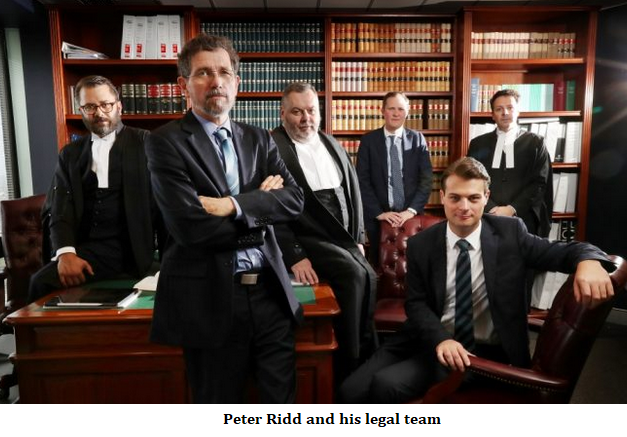 Recently, my wife and I had the great pleasure of meeting Dr Peter Ridd and his wife, Cheryl, herself a highly qualified academic.  Quadrant readers will be aware of Dr Ridd and his date with destiny at the High Court in June.

I had been told that Peter has always thought of himself as a traditional leftist academic but, if so, he must be a master of disguise, because he sounds pretty sound to me.  Of course, the reality is that, just as with Warren Mundine and Mark Latham, the traditional Left has left him behind.  The things that the Left used to worry about – free speech, equality of opportunity, Australian jobs, academic freedom, and so on – are so passe,  and the current fashionable tropes are as much a mystery to Peter Ridd as they are to me.  The word ‘crazy’ pops up frequently in his conversation.

Being a mere essayist, I had felt somewhat intimidated at meeting such an eminent and, more importantly, courageous research scientist, however he immediately put me at ease.

Peter is a down to earth figure with an easy sense of humour who shows no visible sign of the extreme stress he must have suffered during the course of the past few years.  He told me that losing the appeal against the initial and sweeping ruling in his favour by Judge Salvatore Vasta’s came as a great shock because, as far as he is concerned, that academic freedom should trump a university’s code of conduct is a ‘no-brainer’.  And that, in essence, is what this case is about.  It is not about climate science per se.  Peter’s concern is wider than that.  He is on a mission to resurrect a commitment to quality in scientific research across the board and has a vision to establish a centre to further this aim. His area of operations, to appropriate a military term, is not confined to Australia but is global.

He is hopeful the High Court will reinstitute Judge Vasta’s ruling, but is not over-confident.  He told me that it was touch-and-go at the hearing of his application for special leave to appeal.  The feeling of his legal team was that, at the start of the hearing, the panel was inclined two-to-one against him but that they managed to turn that around to two-to-one in favour.

As far as the Reef and marine science are concerned, Peter is scathing about supposed confreres, saying many actually know very little about their subject.   That might simply be down to the tendency of increasing specialisation, such as worrying about the effects of increased levels of CO2 exposure on fish behaviour.   Serendipitously, Peter’s alma mater, James Cook University,CU, is currently under fire for alleged academic malfeasance in this area, as The Australian reported:

The Australian Research Council, the US National Science Foundation and JCU have been asked to investigate the allegations detailed in an article published in Science magazine on Friday.

The article, which was supported by the international Science Fund for Investigative Reporting, is the culmination of years of ­research and contested claims over how fish behaviour is changed by rising levels of carbon dioxide in the oceans.

A team of researchers claim to have evidence of manipulation in publicly available raw data files for two papers, one published in ­Science, the other in Nature ­Climate Change, combined with remarkably large and “statistically impossible” effects from CO2 reported in many of the other papers.

Good news for Dr Ridd, you might have thought, given that this particular scandal – symptomatic of the general malaise that concerns him – should be sheeted home to his institutional adversary.  It is worth noting that it was the the Centre for Excellence that brought the original charge against Ridd for his assertion that its output was untrustworthy due to an unsatisfactory quality assurance regime.  But as he points out, it is quite possible that their Honours, who will hear his case, may well not have heard of this scandal, it being reported only in The Australian.  And that, given the modern propensity of the woke – among whom we can confidently include any number of judges – to simply ignore inconvenient truths, it may not carry the weight it should. Let’s hope he is being unduly pessimistic on this.

During our discussion on the state of the Reef, I mentioned seeing a documentary on a project to seed the Wistari Reef with coral spawn.  This intrigued me because Wistrari Reef is at the southern end of the GBR and, I would have thought, at least risk of damage due to warming.  I had dived on Heron Reef, which is adjacent to Wistari, in September last year, and noted that it is in magnificent shape, as good or better than I had ever seen it.  I wondered why that site would have been chosen.  Peter laughed and replied that there is so much genetic coral material swirling around the tropical ocean that this effort would make not an iota of difference.  But, he added, this project was far from being the most pointless or ludicrous, citing proposals to construct reinforcing structures around endangered reefs or create clouds above the Reef by spraying salt-water mist into the atmosphere. The question of how they would manage to maintain the clouds in some form of geostationary orbit has apparently yet to be resolved.  It was in this part of our conversation that the word ‘crazy’ got a good workout.

Despite his good spirits, it is obvious that Peter is deeply concerned about the future of academic freedom – although he noted a recent encouraging development at Cambridge University which saw the dons vote in support of academic freedom and free speech – and he is clearly determined to keep up the fight regardless of the outcome in the High Court.

I am sure that  readers will join me in wishing Peter and Cheryl a crushing victory in Canberra in June.

17 thoughts on “The Stoic Endurance of Peter Ridd”

When Smart People Get the Climate Crazies