Another Unholy Marriage of Activism and Science 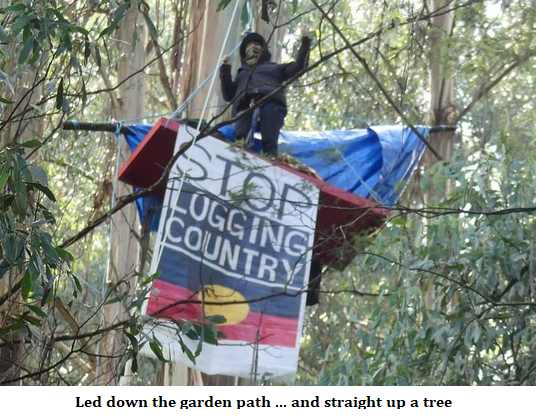 Those working in the native hardwood timber sector have long lived with the existential threat posed by incessant media barracking forthen eco-activists’ ‘no-logging’ agenda. However, the increasing role of conservation scientists in driving this agenda has added a disturbing new dimension that should be ringing alarm bells for those who value academic scholarship as the benchmark for accurate, honest, and agenda-free analysis.

There is nothing wrong with conservation scientists raising concerns about matters of which they have specialist knowledge. However, their increasingly alarmist allegations in relation to native forest timber production are largely rooted in a refusal to acknowledge its proportionally very minor extent and a related lack of understanding of its field-planning, protocols and practices. Together, this feeds into a grossly over-inflated perception of its environmental impact that is being promulgated under the guise of academic credibility.

When it comes to forestry, too many conservation scientists are openly displaying an inability to separate their academic research from their personal opinions. Some are arrogant enough to assert that their published works represent the irrefutable final word in the conflict over native forests, despite often producing flawed papers founded on flimsy or wrong assumptions, with conclusions and resolutions that delve into industry and forest management matters that are beyond their expertise.

Arguably of greatest concern is that some conservation scientists have been promoting their research, or otherwise speaking out in the media, at strategically important times, the apparent intention being to add their academic weight to eco-activist claims. This leaves little doubt that they are active supporters of campaigns designed to influence community sentiment and shape political outcomes.

A case in point is the media pile-on precipitated by the recent appeal court victory of Victorian government forestry agency, VicForests. This decision overturned an eye-brow raising Federal Court ruling from May 2020 that had adjudged Victorian native timber production to be systemically breaching a ‘precautionary principle’ clause contained in the state’s Code of Practice, and thereby contravening national environmental laws enshrined in the Environment Protection and Biodiversity Conservation (EPBC) Act (1999).

The initial Federal Court ruling was surprising because Victorian forests have been harvested under the Code of Practice for many years with little to suggest that its ‘precautionary principle’ clause was being breached. In the 15 years since the clause was inserted into the Code, VicForests’ planning, protocols and practices have been accredited to the world’s largest forest certification scheme – a process which involves regular independent audits that have never seriously questioned VicForests’ adherence to that part of the Code. Also, over this period, Victoria’s Environment Department has conducted regular audits of VicForests’ compliance with the Code, with no concerns ever being raised.

Accordingly, it was no great surprise when VicForests’ appeal against this Federal Court ruling proved successful. Unfortunately, but unsurprisingly, a call by the forest industry for ‘the umpire’s decision’ to be respected was ignored as media outlets mobilised to discredit the appeal win and reassert the activist narrative that VicForests logs illegally in contravention of national environmental laws.

That career academics are playing a major role in this is exemplified by two recent episodes: (1) the ABC’s repeated reporting that VicForests is ‘illegally logging’ steep slopes and thereby damaging Melbourne’s water supply; and (2) an analysis on The Conversation website claiming that VicForests’ appeal court victory will be disastrous for wildlife.

The allegation of systemic ‘illegal logging’ of steep slopes in Melbourne’s water supply was first raised by two ANU conservation scientists on the ABC in November 2019. Virtually the same claim was reported again on the ABC in April 2021[1] while the VicForests’ appeal was being considered by the court. Soon after VicForests had won its appeal, the allegation was raised yet again in another ABC radio report[2] featuring these same scientists claiming that steep slope logging in contravention of Victoria’s Code of Practice was threatening Melbourne’s water supplies, and berating Victoria’s Office of the Conservation Regulator for doing nothing about it.

The first two times this allegation was raised it was refuted by Victoria’s regulatory authority which had already thoroughly investigated it and found no evidence of systemic breaching of steep slope harvest limits, although a couple of minor breaches had been noted. It was also pointed out that the allegation was based on the ANU scientists’ use of less precise terrain modelling (compared to that used to plan and manage the timber harvesting) and insufficient ground truthing. Also, the allegation seemed to ignore that the Code of Practice, at the time of harvesting, allowed a 10% portion of a coupe to exceed specified steep slope limit in some situations.

Perhaps most importantly, the ANU allegation was largely based on harvesting that had not even occurred in Melbourne’s designated water catchments, despite sensationalist ABC coverage misrepresenting it as a dire threat to the city’s water supply.

That, despite these explanations, the same allegation would be raised a third time by these scientists so soon after VicForests had won a legal argument reaffirming the validity of its timber harvesting, can only be construed as an attempt to help reinstate an activist narrative in need of a re-boot. Furthermore, their repeated use of the inflammatory term ‘illegal logging’ has been entirely unwarranted for harvesting operations that are approved by a government agency on land designated for that use, and subject to detailed pre-planning, in-field supervision, monitoring, and post-harvest regeneration. Surely, scientists acting as partisan initiators of misleading, over-hyped media sensationalism are contravening academic standards that demand truth, objectivity and impartiality.

Last week’s analysis by three Melbourne-based conservation scientists on The Conversation warned of dire consequences for forest wildlife due to VicForests’ recent appeal court victory.[3]It displayed a breath-taking ignorance of the history and intent of forestry regulation, and lacked any acknowledgement of the very limited scale and extent of timber harvesting which minimises the significance of its environmental impact.

According to these three scientists – two ecology professors and an environmental law fellow – the States have only regulated forestry since the 1980s and 1990s, despite all States having had forestry agencies undertaking that role for over a century. Apparently, the Regional Forest Agreements (RFAs) were struck between Federal and State Governments in the 1990s so that “forestry would be conducted under these state-led RFAs, avoiding federal scrutiny”! [my emphasis]. And, VicForests’ appeal win apparently means “that logging – even if it breaches state requirements – is exempt from the federal law that protects threatened species”! [my emphasis again].

In fact, native forest timber production has never been exempt, per se, from federal environmental laws. But, in recognition of it as a continuous activity occurring simultaneously on multiple sites, it has, quite sensibly, been treated differently to how federal environmental laws otherwise deal with single large development proposals, such as planned mines or housing estates. This has been achieved through Regional Forest Agreements which allowed the States to develop an agreed hierarchy of regional management plans, site-specific protocols, and enforceable Codes of Practices deemed to serve the same intent as federal environmental laws.

To best serve their anti-logging agenda, eco-activists have long labelled this different approach as an ‘exemption’ to falsely imply that forestry operates without environmental controls; and it is beyond disappointing that many conservation scientists unquestioningly accept this falsehood despite native forestry being one of the most highly regulated land uses in the country.

The three scientists also claimed that VicForests’ appeal victory “removes any certainty for environmental protection”. This is an astounding claim given that Victorian forests are overwhelmingly contained in national parks and other permanent conservation reserves, while VicForests’ timber production operations are restricted to within just a 6% portion of the state’s public forests. On the timber harvesting coupes themselves, operational prescriptions provide further environmental protections, for example through waterway buffers, habitat trees, and silvicultural modifications.

It is inconceivable that the two very senior ecology professors who co-authored the analysis would be unaware of such basic facts; however, to acknowledged it would have clearly undermined the central thrust of their message. We almost expect environmental activists to ‘deceive by omission’ when pushing their agendas, but it is surely not appropriate behaviour for scientists from whom we  expect agenda-free analysis.

Presumably due to a dawning appreciation of the major shortcomings of the analysis, The Conversation allowed just one inane supportive comment in the readers forum before closing it due to “a high risk of comments breaching our standards”. This effectively ‘cancelled’ far more informed voices which could have provided its readers with a more accurate and balanced account of what the VicForests’ appeal win actually means. The behavior of The Conversation’s editors in this instance is surely an appalling indictment for a media outlet that claims to “provide a fact-based and editorially-independent forum”.

These recent episodes are just the latest installments in at least a decade of academic activism over native forests that can be traced back to a small cohort of conservation scientists based at the ANU Fenner School of Environment and Society, but which has since spread to other tertiary institutions. As well as the current denigration of VicForests’ successful legal appeal, much the same cohort of scientists is also behind an enduring media narrative alleging that logging is a primary driver of large bushfires[4] – a contentious notion that is disputed by more qualified scientists who specialise in forest fires and their management.

Central to the concern over all this is the abuse of academic credibility that is automatically conferred on scientists by the wider community. Demonstrating that some scientists are behaving as though they are activists to help push personal, ideological or political agendas, surely undermines the notion that all scientists should be automatically regarded as impartial and agenda-free brokers of scientific truth. Ultimately, this must dilute the public’s trust in science.

The Real Reason Australia Is Burning