Sea Surface Temperatures and the Duty of Scientists 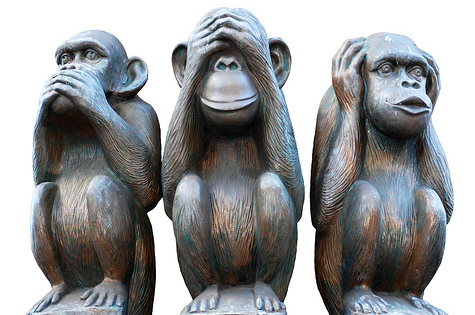 At what point does it become the moral and legal duty of scientists to speak out when an issue involving the integrity of science arises?  This challenge has always existed but may be presenting itself in a new light over the issue of whether sea surface temperatures near the Great Barrier Reef are rapidly rising.

It was this challenging question that came strongly to mind when I was made aware of the two graphs  below. The first is of the raw data from a sensor at the Australian Institute of Marine Science (AIMS) wharf at Cape Ferguson, not far from Townsville, Queensland. To the naked eye, and on an expanded scale, it definitely fails to show any rapid rise over the 29.5 years of observations. 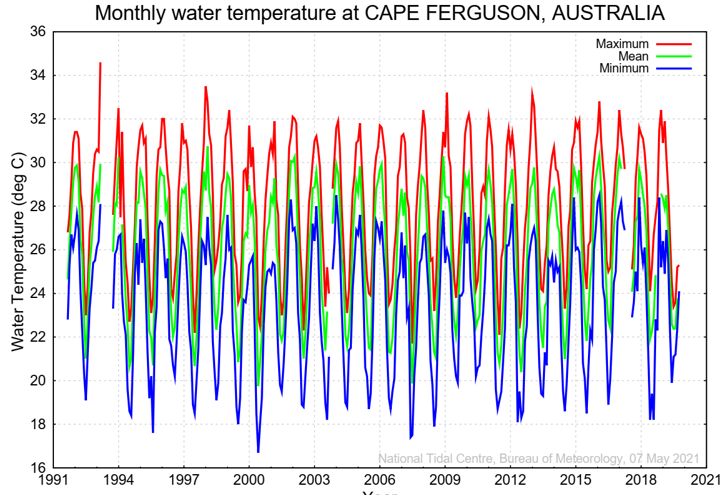 Using basic statistical methods, if one digs deeper into the table of data supporting the graph the answer comes back the same – ‘No.’

“If the numbers at Cape Ferguson are supposed to constitute part of the evidence for rapidly increasing sea surface temperatures in the vicinity of the GBR, they just don’t stack up,” says Dr Johnston. “If a rapid rise exists, we are going to have to look much further afield for the compelling evidence than just a wharf near the shore of the mainland.

“And if we go looking for the real evidence, we are going to have to find some obvious and sustained increases elsewhere in the Reef and its lagoon to compensate for the absence of an ocean-related trend at Cape Ferguson,” he says.

The second graph (below) shows Johnson’s work in ‘de-seasoning’ the annual swings in measured temperature due to the difference in the sun’s apparent position north and south of the equator. When the sun appears to be directly overhead, it is hotter, the days are longer and the water near the surface is warmer. When the angle of the Earth’s tilt makes the Sun appear to move north of the Equator, the reverse is the case – less solar heat, shorter days and cooler water. The annual swing in sea surface temperature is constant and not attributable in any way to changes in the climate. 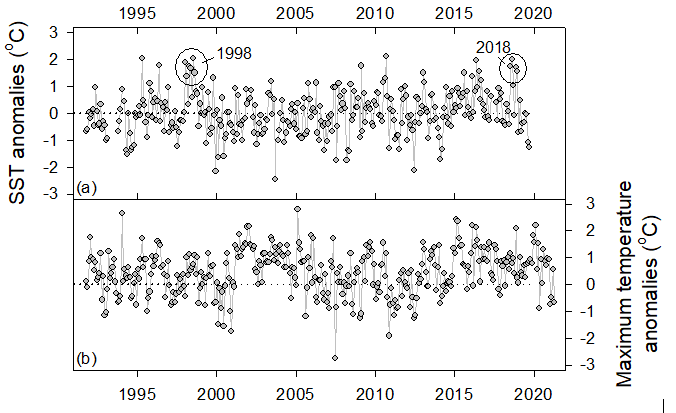 Dr Johnston’s analysis of the de-seasoned data shows two clusters of warmer temperature (1998 and 2018) but no indication that sea surface temperatures are increasing rapidly or that they are likely to increase in the future.

The commonly held view that sea temperatures are rising in the GBR is widespread and the message is deeply entrenched, so much so that the topic is an almost guaranteed dinner-party-wrecker if seriously disputed by any of the guests.

But is it true?

The problem for our dinner party is that, like it or not, a clear-headed review of the observed sea surface temperatures in the GBR shows no rising trend in the data – at least not at Cape Ferguson. Most importantly, there is no such phenomenon in the data that would justify the use of the word ‘rapidly’.

So what is the duty of an ethical scientist at our notional dinner party – to wreck the party or just to stay quiet and avoid rocking the boat? What is the scientist’s obligation to draw people’s attention to the discrepancy between belief and reality? This is possibly one of the oldest challenges in science.

“At Cape Ferguson, there is a huge disparity between what people – and scientists – seem to believe and what the data says,” says Johnson. “True scientists should not sit back and allow this misconception to take hold in the public mind as the truth.”

While Cape Ferguson is a single instance, other sites around the GBR show the same inconvenient result. The AIMS site at Thursday Island, off the tip of Cape York (May 1998 to February 2019); Arlington Reef off Cairns (April 1996 to February 2020); Seaforth Island off Proserpine (July 2005 to February 2021) and Square Rocks, off Yepoon, show no discernible warming trend. It seems to be the truth that hyped talk of rapid rise in sea surface temperature is belief-based, not fact-based.

While Professor Peter Ridd’s ongoing ordeal for questioning the alarmist orthodoxy recommends caution  and silence to the dubious but career-minded, there remains an obligation for those of influence and repute to blow their whistles. Science is about the pursuit of truth; to act other than in its pursuit represents an ethical and moral violation. It’s that simple.

The data for Cape Ferguson is available from the Australian Bureau of Meteorology via the website of its National Tide Centre’s Australian Baseline Sea Level Monitoring Project (ABSLMP) unit. ABSLM monitors seal level and sea surface temperatures at 16 sites around Australia and data can be viewed as PDF graphs and as tables. Please have a look for yourself. You might well be shocked by the disparity between the general belief and the reality revealed by the data. Please also bear in mind that the data you will find is not the work of some hair-brained contrarian sitting at a computer, blogging madly late at night and making it all up. It is official data! (I will deal with more of this data in greater detail in subsequent articles to be published on www.bomwatch.com.au

For the moment, however, let me focus on the Cape Ferguson site at the AIMS wharf, part of the baseline monitoring program referred to above. While AIMS is not directly responsible for the collection of the data (it is done automatically), the sensor is co-located at its property and, given the marine science role of AIMS, one might expect that the organisation would have more than a passing interest in the integrity of the Cape Ferguson data.

My emails to AIMS asking if the organisation finds fault with Dr Johnston’s analysis of the Cape Ferguson figures have not been directly addressed. I have received an email making some hand-waving general points about sea surface-temperature rises but no specific comment about the Cape Ferguson dataset. I have repeated my request but, to date, heard nothing back. Silence can sometimes be more accurate than a million words.

It’s all a bit disheartening. Very few individuals appear ready to acknowledge that they under a moral and or legal obligation to speak out about the chasm between belief and empirical data when it comes to sea surface temperatures near the Reef.

And there is a further question that opens out from this. At what point do we expand the personal moral or legal duty of an individual to examine the wider scope of the legal duty of a corporate entity, such as a university or publicly funded research organisation? Not only is it intolerable that individual scientists dodge their duty to uphold truth, it is perhaps even more intolerable when a corporate entity does the same.

Research organisations we are expected to trust cannot be granted the luxury of legal immunity when they make claims that cannot be substantiated — or when they choose to remain silent when challenged by obvious discrepancies.

I opened this essay by posing the question about when any and every scientists’ personal moral or legal duty to speak-out clicks in. The disheartening thing is that this point of law is not yet clearly determined, and the law seems more porous on this subject than it does in, say, the commercial world when a company – a corporate legal entity – issues a false or misleading prospectus.

Let’s hope the persistence of scientists like Dr Johnston gives heart to others to speak out when they see instances like Cape Ferguson.

Our systems of quality control in science need teeth, not more funding for flawed science based on foundations of wrong, or shaky, data.

David Mason-Jones is a freelance journalist of many years’ experience and a contributor to Quadrant Online. He can be contacted at publisher@bomwatch.com.au

To view the graphs and tables of the ABSLMP data in full visit http://www.bom.gov.au/oceanography/projects/abslmp/data/monthly.shtml

For more information about climate of the GBR visit http://www.bomwatch.com.au

Sadly, There’s No Turning Back the Green Tide

When are we going to wake up?