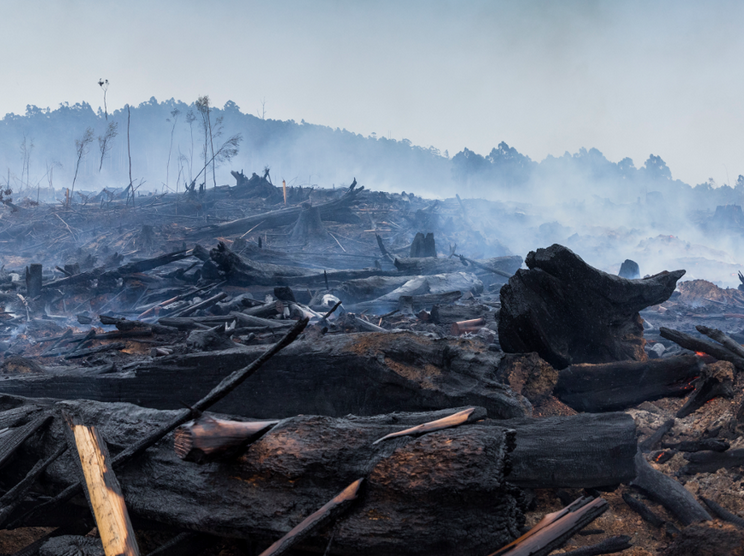 Our national capital was devastated and five million hectares were burnt by wildfire in 2003. The chairman of a parliamentary inquiry, which produced what came to be known as Nairn Report, stated

The committee heard a consistent message right around Australia:- there has been grossly inadequate hazard reduction burning on public lands for far too long; local knowledge and experience is being ignored by an increasingly top heavy bureaucracy.

That view was not universal, however. A dissenting report from a Greens member quoted Professor Robert Whelan of Wollongong University, who asserted that

broad scale hazard reduction is threatening biodiversity conservation and must therefore be avoided by land managers and resisted at a political level.

The top heavy bureaucracy in southeastern Australia did not contribute to the Nairn Inquiry. Instead, the Council of Australian Governments set up another inquiry in 2004. It was headed by a former fire chief and two academics. One of them was Professor Whelan. The COAG report questioned the effectiveness of prescribed burning and emphasised ‘education’ in the cause of “learning to live with bushfire”. Since then, more than 200 people and countless millions of animals have been needlessly killed by wildfires.

Meanwhile, Whelan “prized” Dr. Ross Bradstock from the NSW bureaucracy to set up the Centre for Environmental Risk Management of Bushfires. Professor Bradstock has personally supervised at least 22 PhD Students and 15 staff, bringing in research funding of nearly $20 million. In 2017 he set up the NSW Bushfire Risk Management Research Hub with $4 million in government funding. The Hub says Bradstock is

Professor Bradstock’s books and papers have perpetuated the dichotomy between experienced land managers and academic ecologists/emergency managers. The academics lack experience of sustainable land- and fire-management. They seem not to understand basic eucalypt ecology. The emergency managers compete very successfully against land managers for scarce resources. Escalating environmental and socioeconomic disasters have been the inevitable result, with massive increases in funding for emergency response. Foresters, pastoralists and others living and working with the bush are gobsmacked by the idea that mild fire can threaten biodiversity in a landscape safely maintained by Aboriginal burning for 40,000 years. The hypothesis is that supposedly fire-sensitive, non-resprouting trees and shrubs will be eliminated if we burn too

often, because successive fires will kill new seedlings before they reach sexual maturity.

It was popularised by Dr. Malcolm Gill in Fire and the Australian Biota in 1981 and repeated in those two “most influential” fire ecology books co-edited and co-authored by Bradstock, Gill and other academics. This strange idea overlooks the simple fact that mild fires in a healthy landscape don’t kill mature trees and shrubs. A classic example of a fire-sensitive, non-resprouting tree, offered by distinguished academics such as Professors Ross Bradstock, David Bowman, David Lindenmayer and Dick Williams, is mountain ash (pictured at right) – Eucalyptus regnans.

But way back in the mid-nineteenth century, Alfred Howitt FGSL, FRAI, D.Sc.(Cambridge) noted that the common name for E. regnans was “blackbutt”. This species’ basal stocking of rough bark was characteristically blackened by mild fires lit by Aborigines in summer when the light, discontinuous fuels were dry. Epicormic strands in its thin-barked crown are protected from the radiant heat of moderate fires by the height of the trees. Howitt identified suppression of mild burning as the major ecological disturbance wrought by Europeans:

bush fires tended to keep the forests open … any force which would lessen the force of the annual bush fires, would very materially alter the balance of nature, and thus produce new and unexpected results.

In 1851, less than two decades after the Aboriginal firestick was effectively extinguished in Victoria, five million hectares exploded in the Black Thursday holocaust. Like our Black Summer nearly two centuries later, it had nothing to do with any influence of human activities on climate. In 1891, Howitt noted that South Gippsland had two age-classes of thick young E. regnans forests with dense shrubby understoreys, where there had formerly been very open forests occupied by Aborigines. The older age class dated from an extreme fire around 1820, after the demise of the Yowenjerre people in what is thought to be the first Australian smallpox epidemic.

By the mid-Twentieth Century, Australian foresters had realised that trying to suppress fire was not merely futile but counterproductive. Eucalypt forests require mild fire to maintain their health and safety. However, since the rise of academic fire ecologists, our living elders such as Phil Cheney PSM and Roger Underwood AM, who were instrumental in reinstating sustainable fire management, are no longer being heard by governments. After Black Summer, the promised Bushfires Royal Commission became a Royal Commission into Natural Disasters.

The Commission was instructed to have regard to the findings of previous bushfire inquiries. Both Cheney and Underwood were amongst the multitude of experienced practitioners who’d informed the 2003 Nairn Inquiry. So was I. Consequently, I made a submission which referred to the Nairn Inquiry and Whelan’s submission to that inquiry. I also referred to citations of Bradstock’s publications in the 2004 COAG report. The Royal Commission redacted these references from my submission, even though they were already well and truly on public record.

The resulting report specifically referred to all official inquiries going back to the 2004 COAG inquiry and stopped short of considering the findings of the 2003 Nairn Inquiry. The Royal Commission effectively accepted the COAG report and rejected the knowledge of experienced managers. Consequently, needless death and destruction will continue.

Professor Bradstock recently co-authored yet another scientific paper founded on the extraordinarily erroneous yet persistent idea that our ‘very tall wet eucalypt forests’ are dominated by fire-sensitive non-resprouting species. The paper suggests that we can’t really do anything about megafires in mountain ash forests. It uses flawed methods and models to imply that we could save carbon by not logging so-called re-sprouting forests.

‘Doc’ Jacobs, arguably the ‘father’ of eucalypt ecology, wrote in Growth Habits of the Eucalypts (1955) that resprouting is an essential part of the development of mature eucalypt crowns.

In 2010, three scientists from Charles Sturt University published an article which confirmed by anatomical dissection that mountain ash trees are re-sprouters. Although this was no real advance in scientific knowledge, it was published in American Journal of Botany. Incredibly, the article once again referred to mountain ash as a fire-sensitive species.

I submitted a comment with Dr. Neil Burrows AFSM and Roger Underwood AM, to Forest Ecology and Management, on the latest bushfire science from Bradstock’s group. We noted that the striking contrast in fire regimes of tall wet forests across southern Australia was entirely due to lack of mild burning in the southeast. We also pointed to flaws in the methods and models used by the academics to account for carbon. Black Summer clearly indicated an urgent need to reinstate sustainable fire management across Australia. The real environmental problem is our Lock It Up and Let It Burn conservation paradigm.

Naturally, the new academic wisdom underpinning our environmentally and socioeconomically disastrous fire regimes is fiercely defended by professors and fire chiefs, who (inevitably) blame climate change for the problem.  However, the response to our comment from Wollongong University didn’t seem to comply with the journal’s editorial guidelines. It contained a patently false statement which targeted me personally.

We pointed out to the editor that contrary to the assertion by Wilson, Bradstock and Bedward, we made no attempt to “cast doubt on [their] finding that logging affected above ground carbon stocks”. As we told the journal’s editor, Professor Dan Binkley , “With all due respect, we are not that stupid”. We noted that our observations, based on long experience and well supported by citations from scientific literature, were referred to as “speculation”.  We highlighted the Wollongong academics’ statement that “resprouting characteristics of Eucalypts, forest structure and fire management … are interesting and important issues but well beyond the scope of our study”. Editor Binkley responded

It might be ideal if a journal could adjudicate differences in science, and ensure all scientists share the clearest view possible. As you realize this would not be a task journals could do. Other arenas are the place where some of the differences of use are aired for the community, for scientist to consider. We don’t expect authors to end up agreeing with each other, And it would Be unrealistic to expect no emotional responses. I think Dr. Wilson’s response was not unprofessional, so we have moved ahead with it.

Editors of scientific journals are apparently a law unto themselves. However, with multimillion dollar government funding, Professor Bradstock’s Research Hub should be answerable to the public via the relevant minister. In this case it seems to be The Honourable Matt Kean. I would be interested in his response.

Reefgate on the Barrier Reef