‘Renewable Energy’ and its Four Icebergs 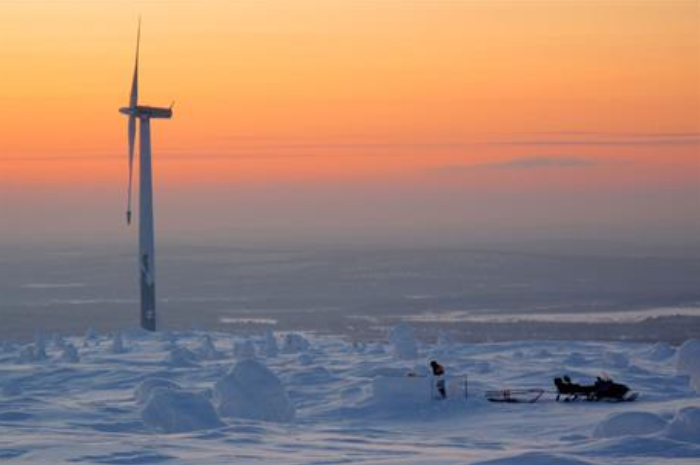 As Australian states compete to set the most ambitious emissions targets in the shortest possible time the prospect of a Green New Deal in the United States has driven the renewable energy (RE) boosters into a frenzy of excitement. Four obstacles stand in the way of these grand plans, however. Call them “icebergs” in the path of the RE Titanic.

1/ Wind droughts; frequent periods up to 30 hours in duration with next to no wind across the whole of SE Australia.

4/ No grid-scale storage is available.

Back in June, I sketched the wind-drought problem for Quadrant Online readers under the headline No Gusts No Glory . Those droughts make nonsense of the idea that more “installed capacity” — what might be produced, but seldom is, under perfect condition on a perfect day — will maintain the necessary amount of power when we no longer have enough conventional sources to provide for our needs. In the early years of wind power it was assumed that the wind will always be blowing somewhere across SE Australia, the area covered by the integrated National Energy Market (NEM). Manifestly this is not the case. Possibly this information was not available when the RE program launched, or it was not provided by the most likely source, the Bureau of Meteorology,  or it was simly ignored. We now have an accurate measure of the wind across the country, provided by the thousands of wind turbines in the sixty-plus wind farms monitored by the Energy Market Operator (AEMO).

To grasp the significance of the low points in the wind supply it may help to compare the function of castle  walls (to keep invaders out), levees (for flood protection) and the wind supply (to keep the lights on). The effectiveness of the walls and the levees is determined by the lowest point of the structure, not the height of the castle towers or the average height of the levees. The invaders or the water will enter at the lowest point.

Similarly, the electric lights will go out when the supply is very low, regardless of the  “installed capacity” of the wind farms and their average output (29 per cent in recent years. Think of it this way: if your tank is empty, the size of the tank is irrelevant.

That is why the low point in the supply of wind power has persisted near zero while the number of windmills and the installed (maximum) capacity has grown steadily larger. The picture  tells the story, it is not up to date but it is obvious from the chart reproduced in No Gusts No Glory that the pattern is still the same. The minimum would be even lower if the data included June and July that are the worst months of the year.  The paper was concerned with the supply in the “five hot months”. 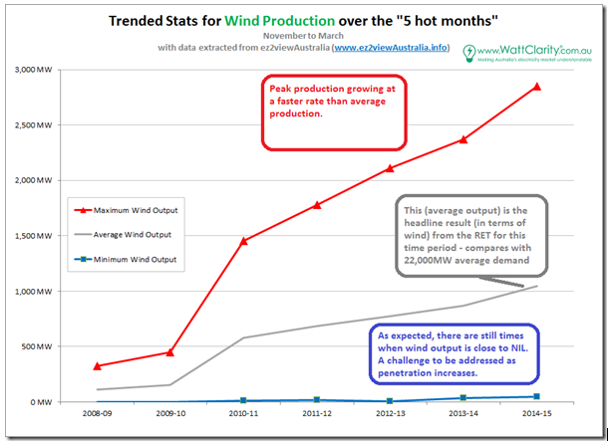 The text in the box near the bottom line contains a warning that close to nil output is “a challenge to be addressed as the penetration increases.”  Penetration has doubled since that time and the challenge is being addressed with talk — endless talk, in fact, about the dubious ‘solution’ of batteries and pumped hydro, as noted below.

This hardly needs to be argued because, if not enough power is available to meet demand, then there must be disruptions, both large and small. Compulsory load-shedding under the direction of the market operator has so far shielded the precarious state of supply from public view. Like the other icebergs, this has been kept out of sight because we still have just enough conventional power to meet the demand, most of the time, with the help of load shedding. The balancing act will become harder each time we lose another coal-fired power station, starting with Liddell in 2022-23.

Nobody will dispute the proposition that Australia is an island, and we urgently need to realise what this will mean for the power supply when we require a contribution from solar and wind to keep the lights on. We cannot run extension cords to other countries to obtain power. By contrast, other places with grand RE policies have access to power from neighbours with conventional power to spare. New Zealand and Norway are exceptions because their topography is especially favourable for hydro.

Here we might learn something from California, which would be in even more sorts of trouble if it were an island. America’s somewhat faded Golden State imports 30 per cent of its electricity, with no other state importing more. A third of the Californian power mix is natural gas (10% imported). A third is renewable with, 20% of their solar power imported and 60% of their wind power imported. During the state’s recent blackouts, the states exporting power to California had the same weather conditions that slashed California’s domestic production of wind and solar power. If those states run down their conventional power assets under the imperatives of the Green New Deal then they will have even less capacity to support the Golden State.

Denmark can produce up to 80 per cent of its electricity from the wind on a good day, but over the course of a typical 12 months, they import 45 per cent of their power. Somehow, when local RE spruikers and rent-seekers cite the Nordic nation as the example to follow, they always neglect to mention that inconvenient fact.

Germany has made a massive investment in the Energiewende, the green energy transition. When the wind is blowing strongly Germany exports power, often at negative prices. She was a net exporter for many years but when the wind isn’t blowing, there is nuclear power available on demand from France. In June 2019, Germany became a net importer for the first time since 2014. That’s something else you’ll never hear mentioned by the RE lobby’s Australian shills.

The Netherlands has carpeted the countryside with wind farms and solar panels, but these  provide just 2.7 per cent of final total energy consumption. As for electricity, wind provides 10 per cent and solar 5 per cent.  When the wind is off duty, power is imported from Germany, when available, and France, where nuclear makes its availability a given.

Britain exports power when the conditions are favourable (hence the French threat to undermine the trade by cutting the the-Channel interconnector), but she also imports during the periods when there is little or no wind.

There is a power crisis across the whole of Western Europe at present thanks to a long spell with next to no wind. France has even fired up some old coal stations because they have unbelievably moved towards RE and run down some of their nuclear capacity!

Closer to home,  King Island (population 1600) offers a salutary lesson. The Clean Energy Authority has advised that some 20 million dollars were spent on a “fully functioning RE microgrid”,  with integrated wind, solar, biodiesel and battery storage. That is over $10,000 per head of population, but notice that inconguous word ‘diesel’. For all the money spent and RE sources installed, diesel is still essential, providing a third of the island’s power. On Flinders Island, a similar story: the 40 per cent RE shortfall is covered by diesel. The mayor is optimistic that the tidal power might be used to make the power supply 100% RE. Across the country, Rottnest Island is another showpiece for the Clean Energy Authority — and, as usual, blackouts would be a constant were it not for the customary, and essential, diesel backup.

The take-away lesson here is to fear the consequences when we no longer have enough conventional power to provide 100 per cent of our needs.

Ultimately, the RE transition depends on storing energy for later use when the wind is blowing and the sun is shining. Vast amounts of storage are required to fill in the troughs between the peaks of supply, yet RE advocates offer no more than the illusion that batteries, such as the Elon Musk-built Tesla facility in South Australia, can perform that function. So-called “big batteries” are proliferating around the country but  cannot be regarded as mass storage because they do not have enough capacity to fill the gap in supply during wind droughts. Their main functions are  to cushion the impact of the chaotic voltage fluctuations  caused by the intrusion of intermittent energy into the grid, and to generate revenue by charging when the price of power is low, then discharging into the market when the price is high.

Chief Scientist Dr Alan Finkel issued a very clear statement on the capacity of  batteries to provide mass storage “…maybe, 20 or 30 years from now, we’ll have new kinds of batteries, vastly powerful, more extensive batteries and we can do [storage] with batteries.”  Moore’s Law (“capacity doubles every couple of years”) applies to data storage but does not work for storing energy due to the fundamental difference between storing electronic data and storing energy.

The first Musk battery attached to South Australia’s Hornsdale No 3-wind farm occupies a hectare, with a capacity of 129MWhrs and a $90 million price tag. It has been upgraded to 190MWhrs at a cost of $70 million, but compare those numbers with the demand of the SA grid, ranging  from 800MWh to 25,000MWh per hour depending on the season and the time of day. The amount of power that the battery can deliver is clearly negligible by comparison.

Pumped hydro is the other great hope for storage, but this can only end in tears due to the massive capital expense and the need to use between 30 per cent and 40 percent of the power generated to pump the water to the upper reservoir,  the first stage of  the process. Many, if not most, pumped  hydro schemes around the world use conventional power to top up the reservoir during periods when RE is in short supply. The biggest scheme in the world at Bath, Virginia, does not use RE at all, it takes power from conventional coal and nuclear power stations to allow them to run continuously at the optimum level of efficiency.

Truly, we live in interesting times, the grand scheme to run an industrial civilisation without the 24-hour contribution of conventional power sources being the most interesting of all.

Get in early and beat the rush. Install a diesel generator today!

Climate Science, How She Is Done