The Most Disgusting Climate Cult of All 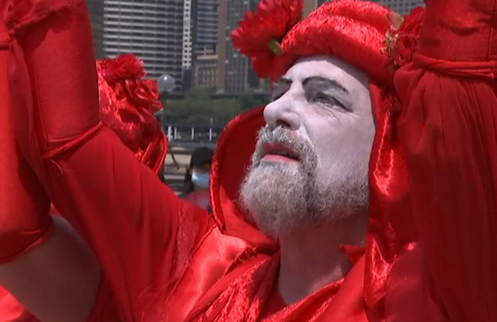 Part One of this exercise documented how scores of academics at RMIT, Monash and Melbourne University pledged fealty to Extinction Rebellion (XR). Part Two discloses the real agendas of XR’s UK founders and leaders. This gives our own academic signatories an opportunity to cross their names off, since they obviously signed by mistake without having done any research.

Part 1: The Asylum Atop Their Ivory Tower

A sinister new development is XR strategising this year for the publicity benefits of a member suicide – especially given public indifference to XR since the ChiCom Flu crisis. A leaked XR document from XR’s UK “Action Strategy Group” sets out its essential core principles and projects for coming months.

It says XR must be ready to embrace ‘extreme sacrifice’, arguing:

We must encourage more extreme actions to achieve meaningful change … Extreme self-sacrificial actions can act as a vanguard for the movement, inspiring people in their rebellious journey and focusing the world’s attention.’ The same document refers to “Self sacrifice”, “Hunger strike to the death”, and “1 person → Suicide, stock exchange.

I don’t know if this means one person suiciding at the Stock Exchange or one person recommending it. An XR spokeswoman told Spectator UK, unpersuasively, that these proposals were ‘brainstorming’, and that the group would ‘not encourage anyone to put their own life at risk’.

“Top ideas” in the document include

# Fear of death → famine, air pollution, placards with facts, roll call of people who have died,

ABC print ran a puff piece for XR last October, at the tail-end quoting Stuart Basden, one of XR’s 15 co-founders, that “climate” is just a pretext for XR’s societal overhaul. Basden’s goal is to overturn white supremacy, the patriarchy, Eurocentrism, hetero-normativity and “class hierarchy”. Basden says

So Extinction Rebellion isn’t about the climate. It’s not even about ‘climate justice’, although that is also important. If we only talk about the climate, we’re missing the deeper problems plaguing our culture. And if we don’t excise the cause of the infection, we can never hope to heal from it. This article is … a call to the XR community to never say we’re a climate movement. Because we’re not. We’re a Rebellion. And we’re rebelling to highlight and heal from the insanity that is leading to our extinction. Now tell the truth and act like it.

Big surprise, XR has been part-funded by the J. Paul Getty oil heirs’ $US5 billion wealth. The Getty’s Climate Emergency Fund has given $US600,000 to XR and one of the Getty heir’s websites touts XR’s work: “The only way to force a change is to disrupt the status quo through legal, non-violent direct action.” XR’s UK finance director, Andrew Medhurst, oversaw a UK inflow of £2.6m of general donations last year. He discloses that many XR agitators are mercenaries on the XR payroll.[1] Co-founder Roger Hallam gets £400 a week, and XR agitators get various fractions of that.

The other UK founder in 2018 was Gail Bradbrook, who met up with Hallam like this: In 2016 she travelled to Costa Rica “seeking a ‘mystical’ transformative experience to draw her out of a personal and political impasse. While tripping on ayahuasca, peyote, and other powerful psychedelics, the environmentalist prayed for the ‘codes for social change.’ Her prayer was answered when, upon returning to the UK, she met Roger Hallam, a 53-year-old organic farmer-turned-civil disobedience expert, at King’s College London. Among his writings were “Escape from the Neoliberal Higher Education Prison: A Proposal for a New Digital Communist University.”

Hallam possessed the supposed globe-changing codes for rebels sought by Bradbrook (no, this is not the script for another Da Vinci movie). Hallam was busy spraying greenist graffiti on King’s College gates and in its Great Hall. He was fined £500 but then cleared by a jury last year after claiming he was tackling a “climate crisis” in a proportional way. This is odd about the “crisis” since the latest HADCRUT global temperature series shows a mere 0.8degC warming in the past 80 years.

Hallam was charged with alleged conspiracy with an XR splinter group in the drone-flying saga that disrupted Heathrow last September. He claimed in court that “Heathrow expansion constitutes a crime against humanity.” The beak, unimpressed, remanded him in custody to Wormwood Scrubs prison after Hallam declined bail.

Six weeks later, Hallam released himself from porridge, telling his Facebook followers, ‘I know I’m a bit weird, sitting on a bed all day reading biographies of Gandhi, having my food made for me, is pretty much as good as it gets. Going to prison is not the end of the world.” This drew outrage from low-income ex-supporters who produced pushback such as, ‘Yes it’s white middle class privilege. Absolutely ridiculous to think working class people can afford the luxury of lawyers, a stint away, flowers for the police … Do you seriously think working class people can afford the ‘honour ‘ of getting banged up like it’s some pantomime?.” He was to go on trial last February 17 but a Court of Appeal win by third parties against Heathrow expansion seems to have scotched his prosecution.

His post-gaol mouthings have been catastrophic for Extinction Rebellion. In November , interviewed by weekly Die Zeit , Hallam said the Nazis’ murder of six million Jews was “almost a normal event… just another f***ery in human history.” He said: “The fact of the matter is, millions of people have been killed in vicious circumstances on a regular basis throughout history.” In the interview he repeated calls for the climate crisis to be treated with as much emotion as the Nazis’ Auschwitz, where 1.1 million people died. “Emotionality is the only way you can get people to do something,” he said.

XR’s PRs of course went into meltdown trying to wish away their founder’s despicable comments. The trauma within XR UK was so great that it had to set up “Care Councils to care for individuals, teams and the movement.” XR flaks said, “We would like to recognise again how painful this situation has been for so many and to let you know that we have given everything we can to hold it for the organism … As a new and rapidly growing movement, XR UK did not have clear systems and processes set up to respond to the challenging situation where an individual made comments that were polarising and which caused harm to individuals, the movement and the wider public.”[2] [3] XR UK eventually sacked Hallam as XR’s spokesman for three months, a dubious compromise. His rustication ends about now.

Hallam, pre-sacking, managed to further befoul the XR nest on January 18 with comments like these:

Interviewer: Would you think it bad if people were injured in or by the climate fight?

Hallam: Civil disobedience is not for cowards. Martin Luther King also made people sit on the streets. He also knew that statistically someone would die, the fascists and the racists would kill someone.

Interviewer: Would you accept that?

Hallam was already on the nose with XR Switzerland for accusing XR ‘Rebels’ of “environmental degradation” because they used dye to turn the Limmat River through Zurich lurid green. He also yelled, “You will die!” at a climateering audience because they had mostly flown in.

We go out and tell people that they will die. That emotionalises them. Building on that, it works like project management: we want to get these people to break the law. After that, it’s just a numbers game. If three are arrested, nobody will be scratched. If a million people are arrested, things will change.

I am speaking to you as a rebel, as a mother, and more than anything, a mother of life on earth … [School strikers] are not protesting, they are begging. Begging for their lives …

We are f***ed. Humanity is f***ed. It [climate] is a disaster of Biblical proportions. We have to let in that feeling of grief. This is a feminine peace for all of us, men, women and other genders, to feel the grief …[5]

Hallam’s Holocaust obscenities were two months after the Australian academics published their XR manifesto, but none that I am aware of has yet removed his or her name as XR loyalists. At the two XR events at Melbourne University I went to a few months back, there was no mention of the Hallam drama.

To sum up XR, I can’t put it better than Brendan O’Neill, formerly of the UK Revolutionary Communist Party:

This [XR] is the deflated, self-loathing bourgeoisie coming together to project their own psycho-social hang-ups on to society at large … Extinction Rebellion is a reactionary, regressive and elitist movement whose aim is to impose the most disturbing form of austerity imaginable on people across the world … It wants to propel us backwards, to the Stone Age. It wants to reverse the most important moment in human history – the Industrial Revolution. It wants to undo that revolution’s liberation of mankind from the brutishness and ignorance of life on the land and recreate that old, unforgiving world in which we all ‘ate locally’, never travelled, danced around maypoles for fun, and died of cholera when we were 38.

If XR achieved its aim for Western decarbonisation by 2025, there would inevitably be an even bigger holocaust than Hitler’s, through famine and disease of the world’s poor deprived of cheap electricity.[6] Currently there’s a billion people without electricity at all.

[1] This is a contrast to sceptics like Perth’s world-renowned blogger Joanne Nova who exists on a tip jar.

[2] It goes on: “We acknowledge that this situation has been painful and challenging for rebels. We ask the most affected rebels to gather together face to face, to listen to each other, and feel heard, which will help with enabling everyone to take whatever next steps feel appropriate to them. It is in our principles and values to openly challenge ourselves in the toxic system that we all carry with us in some form. We are committed to creating something new to hold and transform conflict in our organism, and humbly ask for your patience, as this takes time to get right.”

[3] XR in the UK gave up on its noble attempts to square the circle and sort out the Hallam debacle: “Many attempts at dialogue have been made in this process. The meeting on the 15th December did not reach final agreements. At the end of January, the Restorative Justice Process team proposed to conclude the Restorative Process, due to the withdrawal of participants, and the weight and pressure put on the shoulders of both participants and facilitators.”

[4] “Climate change is the biggest crisis since World War II,” he said in the same interview, a great example of green delusional mindset.

4 thoughts on “The Most Disgusting Climate Cult of All”

How Pachauri Handles the Heat

Climateers in for their COP — Part I