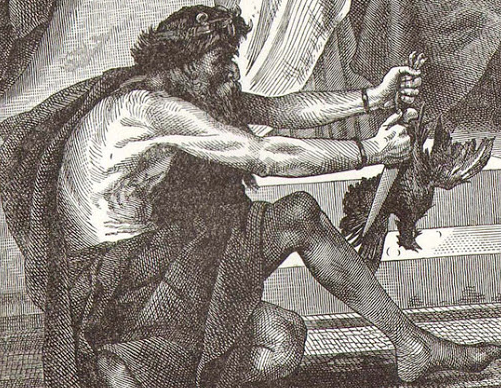 The Emperor was rightly proud of his achievements. His legions had conquered his neighbours and tributes were being collected to pay for his armies, his court, his administrators. There was even enough left over for the entertainment of the masses. Bread and circuses. In spite of all his victories, there was still disquiet in the land from ungrateful plebeians.

With three seasons of drought, the harvests had been poor and it had been difficult to collect taxes to pay for the upkeep of his empire, no matter how hard he squeezed the peasants. Even the patricians in their gilded villas had become agitated about the sustainability of their protected positions, and they recommended he consult the oracles to see what the future held. Thus the Emperor summoned the High Priest to his palace.

Dressed in magnificent robes with borders embroidered in gold thread and wearing a mitre that made him tower over everyone else in the court, the High Priest entered with due ceremony.  He acknowledged no one but the Emperor, to whom he made a slight bow when he reached the podium upon which sat his throne. The Emperor gestured to the High Priest to approach him. “Ave, High Priest. I have a question for you: why are the gods punishing us with these droughts? Everyone in my Imperium suffers. Why at the feast last week, even I as Emperor was unable to acquire sufficient pheasant to satisfy my guests and the wine this season has been inferior to any other in living memory. This cannot continue.”

The High Priest considered his Emperor’s challenge. “I’m most sorry that you have suffered so, but it’s difficult for us mortals to comprehend the ways of the gods Your Highness. However, I and my fellow priests have a way to predict them with some certainty. Would Your Highness be interested in knowing how?”

“Of course” said the Emperor. “To see the future is to control it. How would I do that?”

“Well,” the high priest continued, “Your Highness would be aware that the priesthood has for many decades been sacrificing chickens and examining their entrails. What Your Highness may be unaware of is that after each sacrifice, we record an analysis of the entrails.”

“I did not know that,” the Emperor nodded. “You may continue.”

“As Your Highness would also know, we have a record of all harvests over the same period from your tax collectors, so it should be straight forward to compare the two so we can use these sacrifices to forecast future harvests.”

The Emperor appeared rather dubious about this proposition and motioned to his head counsellor. “What do you think of this?” he demanded.

The counsellor, well known for his forthrightness, which the Emperor valued when he agreed with his own opinion, not so much when he didn’t, stroked his prominent chin and after some consideration addressed both the Emperor and the High Priest firmly. “I can’t believe that there is any connection between the size of the harvest and the condition of the entrails from slaughtered chickens. This is just superstitious nonsense and a waste of the Emperor’s wealth.”

The High Priest glared at the counsellor. “How dare you question the authority of the High Priest and the consensus of the IPCC.”

“What’s the IPCC?” interjected the Emperor.

“Why Your Highness, the Infallible Priesthood Chicken-entrail Convocation. The highest authority on these matters in the Empire.” Turning to the counsellor the High Priest demanded, “By what authority do you challenge this sacred knowledge. Have you ever been a part of the priesthood?”

Suitably admonished, the counsellor withdrew. “Very well,” said the Emperor, regaining control of the audience. “What do you need?”

“First we must summon the High Priests from each region of the Empire. While waiting their arrival, our priests here will re-interpret all the entrail analyses as they specifically apply to harvest size to determine the nexus between sacrifice and harvest. Further we will conduct ritual chicken sacrifices for the next 90 days every hour. The Convocation will interpret the entrails of each sacrifice, with the Grand Inquisitor arbitrating their ultimate interpretation and the scribes documenting each.

“Finally, together, our IPCC will announce its harvest prediction for the next 100 years.”

The Emperor, still somewhat dubious, asked, “And I suppose that you wish me to fund this from my treasury, a treasury already depleted by the unwillingness of my subjects to contribute as they have in the past?”

“Yes, Your Highness, but as you yourself have said, such knowledge gives you great power over your subjects and your enemies.”

The Emperor thought for a moment. What did he have to lose? It was important that he be seen to be taking action and if it didn’t work, it would still buy him time. People would actually congratulate him for using the divine knowledge of the priesthood. Even his head counsellor had submitted to the High Priest. Perhaps an example should be made of his impertinence.  “Very well,” the Emperor declared. “You may proceed.”

“Your Highness,” the Priest announced to the Emperor, “Would it please you to grant an audience to the most revered IPCC.” He gestured to the 100 robed priests filling the court behind him.

“Welcome,” said the Emperor. “I’m looking forward to your predictions of my harvests. Do you have good news for me?” The Emperor looked to the priests with not a little menace in his voice.

“We bring glad tidings,” the High Priest replied. adjusting his robes with a barely noticeable tremor in his hand.

“This has been a mammoth undertaking for us all,” he said in a somewhat stronger voice. “We were faced with a number of difficulties as we created our method for predicting the harvest. At first there seemed to be little relationship between the chicken-entrail record and harvest data, but fortunately we found that when we adjusted the data, the fit was extremely good. What call this homogenising the data, and this means we are highly confident in our predictions.”

“So what do you predict?”

“Great news, Your Highness, the IPCC predicts harvests growing at the rate of 10 per cent per year for the next ten years. Our predictions for the next century, along with supporting analysis, are contained within this scroll, a Summary for Empire Policy-makers.”

This news, thought the Emperor, would please the people, who would honour him for his sagacity. It bought him the time he wanted. Now he needed to show boldness. “Your efforts are much appreciated by the Empire. With these measurements, I can with confidence increase expenditure on monuments to the gods, the instruction for 5000 more priests, an increase in pay for my armies and Games for the people to celebrate the wisdom of the IPCC.”

“Your generosity humbles we priests. We will continue our work with a new forecast for the next 1000 years!”

The Emperor stood and nodded to the assembled priesthood. “I will not forget this moment.”

He stood before the Emperor, between two centurions, and was visibly shaking. His robes no longer immaculate. He carried his mitre under his arm and his bald pate glistened with perspiration.

The Emperor stood and roared at the High Priest. “Three failed harvests. Where is this prosperity you promised me? My treasuries are almost empty, my armies threaten me and the plebeians are revolting. They don’t believe the IPCC predictions and neither do I. My counsellor was right that sacrificing chickens was superstitious nonsense. He had a good head on his shoulders. Well not anymore, and I regret that. Now, give me one good reason why I shouldn’t examine your entrails?”

The High Priest now realising he had nothing to lose, pulled himself upright and looked the Emperor squarely in the eye. “Your Highness, it is dangerous for even an Emperor to mock the gods. These predictions are long term, particularly our most recent 1000-year forecast. There may be small, short term discrepancies within the forecast, the detail can at times be difficult, but there is no doubt in my mind or in the opinion of the IPCC.

“The religion is settled!”

The Emperor was taken aback by the vehemence of the High Priest’s statement and if the truth be told a little frightened of the wrath of the gods even if he was still sceptical. He then thought, if he did have the High Priest executed, what would he do next? Who could he blame then? In any case, perhaps the rains will fall next year. More time. “Then what do you propose to improve your predictions?”

“Your Most Eminent Highness, we need to sacrifice more chickens.”

A fanatic with an ABC microphone