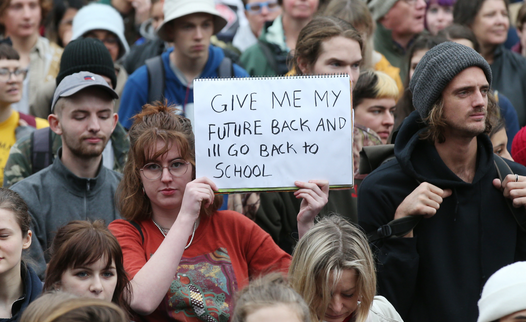 Back in 2012, The Australian published an article warning that by 2020 there would be hardly any snow in Australia due to the “catastrophic effects” of climate change. According to Professor Katherine Pickering, from the Griffith School of Environment:

We’ve predicted by 2020 to lose something like 60 per cent of the snow cover of the Australian Alps.

Well, that sure didn’t age well (For more of Professor Pickering’s prophecies from 2012, see the video clip at the foot of this article). The increase in climate alarmism seems to mimic a growth in the number of younger generation protestors, with 17-year-old Greta Thunberg leading from the front. Following on from this, climate strikes are growing in number and popularity.

As an 18-year-old high school graduate, I empathise with the inclination of many in my generation to be alarmed about environmental concerns. What are some of the reasons why so many young people are drawn to this polarising political issue?

People are psychologically attracted to commit to something greater than themselves. This forms the foundation for communities, military service, charity work and religious values etc. However, with the rise of climate alarmism, it seems that my generation is drawn to nothing less than ‘saving the world’. As Hosseini observes, we all search for something greater to form our identity.

There is probably nothing more important than the legacy and memory that one leaves behind. Young people today, in particular, are  being filled with the existential fear that such a prospect may not be possible. Thus does the sense and need to create a legacy intertwine with activist rhetoric and dogma.

‘The most powerful motivator of all, is fear’. — Robert Evans Wilson

If you were told the world was ending in 70 years—give or take—would that not rightly invoke an emotional response? Well, what we’re seeing today is an emotionally driven wave of environmental hysteria. We fear the most what we cannot see.

‘The person who talks most of his own virtue is often the least virtuous’. — Jawaharial Nehru

Across the ages, nothing seems more appealing than being validated by those around you. Greta Thunberg’s recent ‘rebuke’ to the United Nations—and especially the thunderous applause and validation which followed—taps into the deeper desire for youth around the world to similarly find such praise. As Nehru rightly observes, we’re all filled with an earnest longing to be seen as virtuous.

‘Control desire: refers to a subject of circumstance or relationship that an individual may want to exert control over’. — Wikipedia

The need for control amid ever-present predictions of apocalyptic chaos seems to be the pervading ‘atmosphere’ for young people today. Without a God or higher power to submit to, human beings’ greatest desire is to be in control of their own lives and destinies. Such a desire to control one’s own world may well be fuelling the climate alarmism.

‘There is a real danger in believing it when people use the word ‘Genius’, and it’s even more dangerous when we let hubris tell ourselves we are’. — Ryan Holiday, Ego is the Enemy

Both in public and private schools throughout Australia, students are being fed the self-esteem rhetoric that ‘you can do anything’ and ‘you can change the world’. Today’s youth has been raised from infancy with this advice, making them natural and eager fodder for climate alarmists and protest organisers.

‘Disobedience, in the eyes of anyone who has read history, is man’s original virtue’. — Oscar Wilde

Down through the ages, young people have filled the anti-establishment role. Statistics show that the majority of youth are of a progressive political inclination. This changes overtime, as age brings responsibility, and breeds conservative values, as the graph of the recent UK election demonstrates:

‘Claiming to be a victim gives people a perverse authority. Subjective experience becomes key… as victim status can buy special privileges’. — Claire Fox, author of I Find That Offensive

It seems that victimhood is the new virtue and ‘go to’ emotional heartstring of the alarmist movement. Take it from Greta Thunberg, who compains, “You have stolen my future”.

‘Animism is the religious belief that objects, places and creatures all possess a distinct spiritual essence.’ —  Oxford Dictionary

The UN debates if “Mother Earth” deserves human rights. In Kyrgyzstan, while the parliament sacrificed seven sheep to dispel evil spirits, some 40 per cent of the world holds to some form of animistic belief. Closer to home, due to the integration of Aboriginal culture and Dreamtime spirituality, ‘land’ and ‘country’ have been imbued with spiritual worth. Such ethereal concepts fuel the rise in youth climate alarmism.

‘The hope of the righteous brings joy, but the expectation of the wicked will perish’.  — Proverbs 10:28

Of greatest concern is the rising tide of youthful depression and ennui. Climate change activists’ Gaia-centred green theology presents the imminent damnation of global catastrophe unless the world repents.

What made the difference for me was making myself better informed about the difficulty in accurately predicting longer-term climate and its impacts. Predictions that fall short, like here, here and here, reaffirm the inability of science to ascertain the future via computer models. The BoM, as we all know, often gets its short-term forecasts wrong, yet we are urged to believe its predictions for 100 years hence are holy writ and must never be challenged.

Making the effort to understand Australia’s past bushfires, temperatures and our recent cooling period made my greater fear not of climate change but of a further descent into the emotionally driven echo chamber of hysteria and irrationality. Of the two, I know which is the more dangerous.

Al and Clive’s $alvation $how