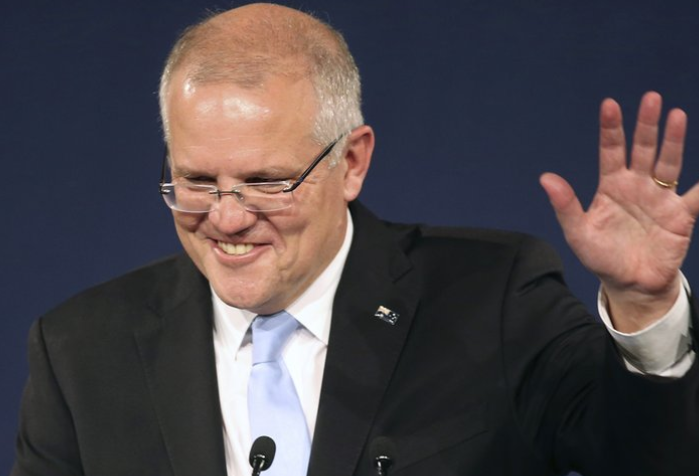 Dismiss it as a midnight reverie, if you will,  this dream of mine that pictured a Prime Minister more a’feared of squandering Australia’s potential and prosperity than of irritating the ABC and  greenish Wets within his own party. With such a vision still fresh, I abandoned the warm fug of my sheets to scribble the draft of a speech the Prime Minister should be giving.

MEN and women of Australia, I recognise that you and our Nation should expect more of your Government than we have delivered. For this we are deeply sorry. I also want to recognise that this Government is not alone in having let you and our Nation down. For the past fifty years, successive governments have been derelict in recognising the great gifts of our  natural resources, agricultural capacity and human potential. We are determined to change this.

The current drought and fierce bushfires have been a wake-up call, one that brings many issues into perspective and which this government cannot ignore. A false sense of security has seen far too little thought devoted to the big issues that must be tackled if  Australia is to prosper. We truly have been a lucky county, but our luck is on the wane.

I want first to address a matter that has been a roadblock to effective government for the past two decades. I am speaking about what is loosely called ‘climate change’. These two words have many meanings but for many they refer to a continual increase in ambient temperature allegedly caused by an increase in atmospheric carbon dioxide resulting from the burning of coal. This is said to raise sea levels, sink islands, demolish coastal habitats, cause droughts and bushfires, and in time, even wipe out mankind. Let me tell you, a sense of fear and dread has been falsely created.

Consequently, many governments, including yours, have put in place programs to reduce their output of carbon dioxide by replacing reliable power generation with the fluky output of sources such as wind and solar. These measures have resulted in increased power prices and less reliable supply. As a result, those industries relying on low cost and dependable power are moving their operations to less constrained locations, all to the detriment of the individual and the Nation.

Meanwhile, as I must now acknowledge, fashionable pseudo-science and unwarranted alarmism has corrupted what should be institutions of vital integrity. I speak , to mention but three, of the CSIRO, our universities and the national broadcaster, all of which have prostituted their good names in promoting the hoax of imminent catastrophe. When this government was returned to office in the so-called “climate change election”, we should have taken note. Instead — and I apologise for this — we took the counsel of rent-seekers, including some with an inordinate influence on the Coalition and its policies. This will stop forthwith.

As a result of the drought and the bushfires your Government has rethought our position on the question of changes to the climate and shifts in seasons. We now deem it is unwise to regard seasonal and climatic changes as being driven by one parameter only, carbon dioxide. The climate and our seasons are the result of very complex, and to be frank, largely unknown parameters that are far outside mankind’s capacity to control. To propose that a change in one variable, a trace gas representing just 0.04% of the atmosphere, is the only factor that influences climate is, upon reflection, quite preposterous. Yet that is what we done, at the expense of many billions of dollars, and which I deeply regret.

Nevertheless, it is true changes to our climate and our seasons are occurring, as they have for millions of years.  Your Government will now change our approach to any such changes, not by attempting to make Nature bend to mankind’s will, but to adapt to, and work with, natural processese through a series of new initiatives.

Drought and floods have always been a feature of this continent, as Dorothea Mackellar reminded us in her immortal poem My Country with its ‘droughts and flooding rains’. Australia receives an abundance of rainfall annually, but the results have been large-scale flooding and then subsequent drought as the water that caused the floods is returned unchecked to the oceans and long dry periods set in. Consequently, our fertile lands fall into drought and the vast centre of Australia remains unused.

Your Government will immediately call for expressions of interest for the harvesting of rainfall with the intent of flood-prevention, the generation of more hydro power, the watering of inland Australia and the establishment of significant new agricultural capacity. There will be many nay-sayers, but your Government believes it is time for us to return to the mindset that initiated the Snowy Mountains Project and saw it to completion. We will adapt to, and work with, what Nature so generously provides.

In relation to bushfires, there is much to learn from our current experiences. Your Government will work with the states to ensure that we adapt to the changes that nature presents. To this end we will examine how we can improve our national park management, including fire trail strategy; fuel-load management via prophylactic burning; land management; resourcing firefighters, plus making full use of available resources up to and including the military. To this end we will seek to redefine state/federal responsibilities.

But to achieve all this we must have clear air and a tight focus. To do so we need to remove the roadblock I mentioned: the unhelpful demonisation of coal, whose exports are vital to our economy, and the obsession with carbon-dioxide emissions.

This Government will immediately withdraw from the Paris Agreement, cease all subsidies to renewable energy sources and issue tenders for the construction of at least three modern coal-fired power stations that will generate reliable baseload power, removing the need to worry about overcast days and windless nights. As a further priority we will re-examine carbon-free nuclear energy. When the inevitable protests erupt, we will remain steadfast and remind the electorate that children, especially those who should be at their desks in school, are best seen and not heard.

I know all this will come as shock to many of you. In a way it has come as something of a shock to me — but that shock springs from the realisation that our nation has been asleep at the wheel for many years. We have been ignoring the great potential that surrounds us and the abundance that nature provides.

It is this Government’s commitment to work with you and turn those words into reality.