Analysis and Prophecy as Autopsy 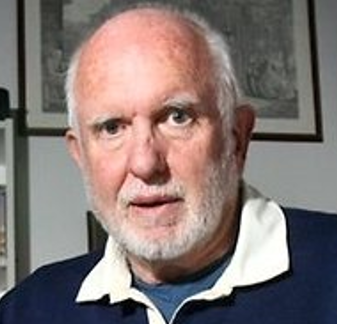 In Quadrant‘s July 2009 edition, Ray Evans (above) wrote of the green left’s infiltration and capture of Australia’s environmental movement and one of its dire consequences: the Black Saturday fires which ravaged Victoria and claimed 173 lives in the space of an afternoon. Ray’s interest was more than academic. A lover of the bush, he owned a weekend cottage which was destroyed, as was the nearby village of Marysville, when a late afternoon wind shift turned a raging fire’s flanks into a new and broader front which rolled north through the Black Spur, engulfed Ray’s beloved bush retreat and then destroyed the town and 34 lives with it.

Ray died in 2014, so he was not to see his worst fears of even larger conflagrations fulfilled, as is the case today from Victoria to Queensland. His essay reads as both prophecy and autopsy. In the excerpt below Ray identifies the green cancer of vandals who present themselves as stewards:

The takeover by the socialist Left of the environmentalist movement in Australia can be dated from the early seventies, culminating in the 1973 AGM of the Australian Conservation Foundation, an organisation founded by Sir Garfield Barwick and Sir Maurice Mawby, funded in part by the McMahon government, and which had as its aim increasing the public awareness of the importance of environmental matters.

By the late 1960s the communist Left was suffering from defections over the Soviet invasion of Hungary in 1956, but more significantly from the brutal repression of the Dubcek regime in Prague in 1968. The Communist Party of Australia and its fellow-travelling socialists in the ALP were having doctrinal and morale problems. In a brilliant strategic move, it was decided that the environmentalist movement was a new and promising vehicle for obtaining political influence and power.

The American sociologist Robert Nisbet wrote in a review article in the American Spectator in 1983:

As an historian, I am obliged by the record of the Western past to see Environmentalism—of the kind espoused by the [Barry] Commoners and the [Paul] Ehrlichs—as the third great wave of redemptive struggle in Western history; the first being Christianity, the second modern socialism.

The appeal of Environmentalism, in its more extreme manifestations at least, becomes irresistible to that permanent cadre of political and social radicals Western society has nurtured ever since the French Revolution. This cadre has never been primarily interested in the protection of nature,but if such a movement carries with it even the possibility of political and social revolution, it is well that the cadre join it; which, starting with the late 1960s, it did.

So Greenpeace was taken over in Canada, its founder, Patrick Moore, was ousted, and in Australia, the Left, having enrolled into the ACF in considerable numbers, ousted the old guard in October 1973, and installed Geoff Mosley, hitherto a recent employee of the ACF, as its new Director. John Blanche, the former head of the organisation, resigned immediately, as did many members of the board.

An example of the attitude of the new regime to the role it envisaged for the ACF is found in 1983-84 Annual Report, written by Geoff Mosley:

Undoubtedly the main issue to attract the Foundation’s attention was peace and disarmament and the related topic of opposition to uranium mining and export.

The worsening arms situation not only threatens annihilation, but by absorbing resources and creating a feeling of doom is rapidly eroding the possibility of dealing with drastic social problems such as land degradation and deforestation.

It is, indeed, difficult to see the arms race and deterioration of the physical and social environment as being in any way separate matters. Any solution will require a global anti-nuclear movement.

The ACF has adhered to a hard Left position on every environmental issue ever since.

In 1982 the Cain Labor government won office in Victoria. Although Rod McKenzie was appointed Minister for Forests in 1982, Joan Kirner was in charge of the political agenda. Kirner was the leader of the Socialist Left faction in the ALP, in effect a medieval baron not beholden to the Premier for her office. In June 1983 Cain announced the creation of a new mega-department of Conservation, Forests and Lands, which subsumed existing departments of Forestry, Crown Lands and Surveying, the Department of Planning and the Department of Conservation. The Victorian Forests Commission was dissolved and the new department came into being in December 1983.

Joan Kirner was the first minister and early in 1985 she fired Ron Grose, a forester with an internationally distinguished reputation, who had been chief of the Forests Commission. She also fired or retrenched the people who had served in the top three layers of the Forests Commission. She appointed as head of the new department Tony Edison, an unknown figure from the UK, who was outspoken in his hostility to foresters and forestry, and he in turn appointed hardline greens as senior officials in the department. From that day to this the department, now officially the Department of Sustainability and Environment but known throughout rural Victoria as the Department of Scorched Earth, has been completely dysfunctional.

The Victorian Forests Commission had a history going back to its establishment in 1918, and had built up a culture of expertise in forest management which made it respected throughout the international forestry community. Its expertise and knowledge of local terrain and silviculture extended deep into the domain of Victoria’s forests. Some of that expertise and knowledge is still to be found in the people, mostly now retired, who once worked for the Forests Commission. Its dissolution at the hands of Joan Kirner was akin to the dissolution of the monasteries by Henry VIII, but where Henry handed over the vast treasures of the monasteries to his favoured courtiers, Kirner handed over the treasure trove of Victoria’s forests to the Greens.

The cause of the dysfunctionality of the DSE [Department of Sustainability and Environment] is doctrinal. At the core of Green doctrine is the belief that trees are sacred and that mankind is a pest or a virus on the planet….

Ray’s essay can be read in full here.

These before and after photos are taken from Marysville survivors Killian and Robyn Fitzpatrick’s account of the day their town died.

One thought on “Analysis and Prophecy as Autopsy”

Australia turns back the climate tide!