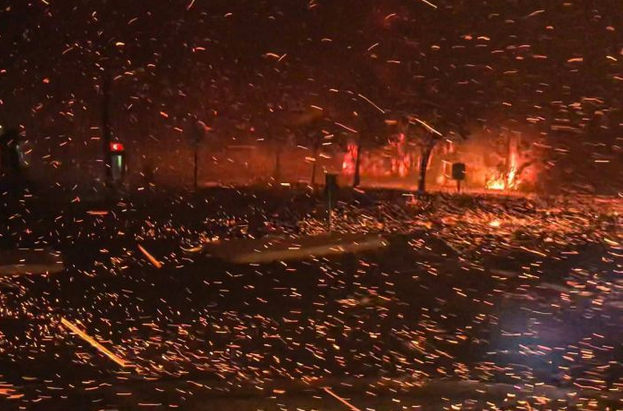 The recent bushfires up and down the eastern coast have been a national tragedy. They have claimed many lives, destroyed hundreds of houses, and have decimated literally hundreds and thousands of hectares of bushland. Everyone agrees that we are overwhelmingly indebted to the fire-fighters who have been tirelessly waging war against nature — they have done a tremendous job, in the face of a seemingly insurmountable task.

Whilst the cataclysmic nature of the inferno is unanimously acknowledged, a chorus of Australians has hastened to the conclusion that global warming is the cause, and CO2 emissions the culprit. Sadly, this is exactly the sort of behaviour to expect in our post-Christian nation. Since we have abandoned God, we are constantly trying to find someone — some thing — to blame for the disasters that naturally and tragically occur. It is almost unbearable that we accept the reality that we live in a broken world in which nature is often hostile, and that this truth is more apparent at particular times in history. As Thomas Sowell wrote:

The reason so many people misunderstand so many issues is not that these issues are so complex, but that people do not want a factual or analytical explanation that leaves them emotionally unsatisfied. They want villains to hate and heroes to cheer — and they don’t want explanations that do not give them that.

Here’s why the climate change narrative fails to offer any meaningful solution to the recent calamity.

The truth is that the climate is,— and has always been — changing. Likewise, bushfires have always been part of Australia’s history, and the recent bushfires are not an historical anomaly. Long before the era of modern industrialisation, bushfires occurred sporadically due to factors beyond the control of humans. As the Australian government’s Geoscience wrote:

The Australian climate is generally hot, dry and prone to drought. At any time of the year, some parts of Australia are prone to bushfires… For most of southern Australia, the danger period is summer and autumn. For New South Wales and southern Queensland, the peak risk usually occurs in spring and early summer.

The worst bushfires to ever hit Australia were the Black Thursday fires of 1851:

Fires covered a quarter of what is now Victoria (approximately 5 million hectares). Areas affected include Portland, Plenty Ranges, Westernport, the Wimmera and Dandenong districts. Approximately 12 lives, one million sheep and thousands of cattle were lost.

Australia’s total population in 1851 was around 435,000 people; not even 2 per cent of the national population today. You don’t need to be a mathematician to see that, per-capita, we have seen a much less devastating fire in recent days when compared to the inferno of 169 years ago. Not to mention that it is unthinkable to imagine the number of lives that would have been lost if the population in 1851 matched today’s 25 million.

Since 1851, the world’s population has far exceeded seven billion, requiring astronomical increases in the use of fossil fuels to produce the necessary goods and services. Yet, the irony is that both the frequency and intensity of bushfires has not changed at all since then. Various other bushfires occurred before the rapid industrialisation of the late 20th century, and therefore cannot be attributed to climate change. These include the: 1898 Red Tuesday bushfires, 1926 bushfires, and 1939 Black Friday bushfires. If climate change really is the fundamental catalyst for severe bushfires, wouldn’t they be practically absent from Australia’s pre-industrial history? Moreover, if Europeans have been in Australia for less than 300 years, it is highly likely that similar — potentially even worst — bushfires have occurred throughout our nation’s history prior to colonisation. Again, if this is the case, it completely dismantles the claim that anthropogenic climate change is the cause of the recent catastrophe.

Rather than being the cause for bushfires, industrialisation and technologization — which have been brought about by the utilisation of fossil fuels — have alleviated the effects of natural disasters by allowing us to prevent millions of deaths. In 1900, over 1.25 million deaths were caused by natural disasters. As shown below, both the frequency — and number of deaths — has dramatically decreased since then. 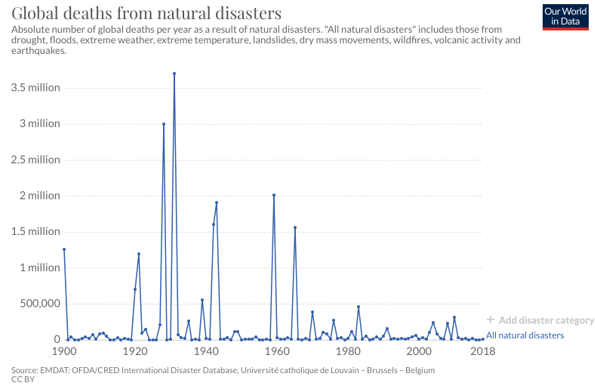 These drastic improvements can be directly attributes to technological innovation and advancement. Here are just a few of these developments:

# Increased Warning Systems — These systems allow us to more accurately predict when natural disasters will hit, allowing for time to prepare and evacuate from danger areas. This also allows us to save wildlife — such as Koalas — that would otherwise be eliminated by natural disasters.

# Increased Economic Productivity — Increased global GDP has allowed literally millions of people to rebuild their lives after natural disasters. Amongst many other benefits, increased GDP has increased our ability to deliver disaster relief, transportation of people out of disaster zones, and communication to those in danger areas through telecommunications.

Industrialisation is not the cause of the bushfires. Rather, it has been — and continues to be — verifiably beneficial to victims of natural disasters. What a foolish and naive political manoeuvre it would be to restrict Australians access to fossil fuels when they are the very resources that mitigate those who are most suffering.

Just look here for some of the false environmental predictions and their drastic consequences on human life.

Australia contributes a low 0.3 per cent of the global greenhouse gas emissions. When you compare this to China’s 26 percent contribution, our emissions are negligible. Furthermore, our nation has been decreasing its global emissions ever since 2000. The graph below shows that Australia’s ‘Emissions per capita’ have been sliced by almost a third, decreasing from 36 tonnes per person in 1990 to less than 22 tonnes in 2019. 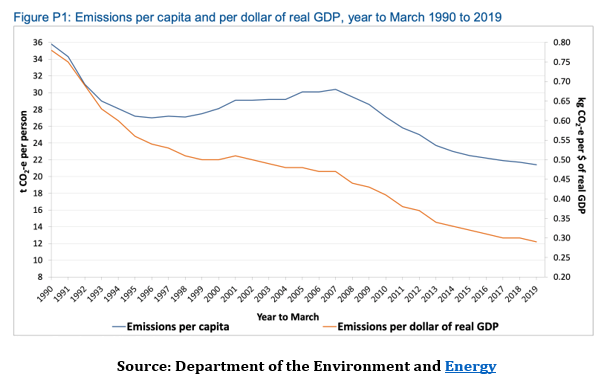 If climate alarmists truly believe that industrialisation is the cause for bushfires, they ought to chase after the primary contributors of greenhouse gas emissions. Further, they ought to acknowledge that our CO2 emissions are indeed decreasing without the assistance of multi-billion dollar climate initiatives, and admit that bushfires — such as those we have witnessed this year — are therefore not directly caused by climate change.

We live in an age when earnest debate is often exchanged for superficial slogans, and the climate change movement is a clear example of this. The quasi-religious commitment of some Australians to climate change is a manifestation of what happens to a nation when it abandons its Judeo-Christian roots. Let us give our hearts to those who are suffering as a result of the recent bushfires by doing all we can to support them. However, in the process, let us not sacrifice our brains on the altar of a hysterical political movement. What the victims of these fires really need is not social commentators blaming ‘climate change’ for their suffering, but rather a helping hand to restore their lives.

* Note: I am yet to meet someone who doesn’t believe that the climate is changing. What is debated is the degree to which these changes are primarily anthropogenic or not. For the sake of simplicity, I have used ‘climate change’ in this piece to refer to ‘anthropogenic climate change.’

42 thoughts on “Bushfires and Climate Change: No Link Whatsoever”