What Green Journalists Are Careful to Omit 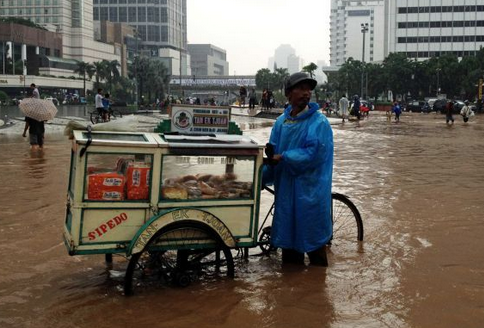 Changes in the weather were once attributed to God or the Devil. For today’s eco-anxious, especially Covering Climate Now folk, the knee-jerk cause of any nasty atmospheric – or indeed terrestrial – phenomenon is spookily spiritual too: climate change, that invisible bogeyman allegedly created by increasing anthropogenic carbon dioxide emissions.   Another phenomenon, however, is notably absent from their alarmist lexicon – and that of the United Nations – population growth.

Consider, for example, the interview on ABC RN Drive early this month with journalist Desi Anwar of CNN Indonesia regarding “climate reporting” in that nation. The host, Patricia Karvelas, asked the right questions. Ms Anwar’s answers were impressive too, yet both tip-toed around the elephant in the greenhouse. One had to suspend disbelief and accept that nebulous “climate change” is a key driver of Indonesia’s environmental problems. Population growth did not get a mention, at least not directly.

Karvelas: How should journalists be covering the issue of climate change? It’s a question that media organisations are grappling with across the world. As floods, droughts and heatwaves hit, and we ask the question to what degree climate change is responsible?

Desi Anwar is tackling that question through her work as a journalist in Indonesia. She is a senior reporter for CNN Indonesia. She’s also the host of Insight with Desi Anwar. Thank you so much for your time.

What do you think about the job we’re doing as journalists broadly in covering this huge issue and actually make it make sense to the people who consume our news?

The interview, however, did not make much sense, at least to this consumer. For Ms Anwar did not answer the question: to what degree “climate change” is responsible for disasters on the archipelago?

Perhaps my assessment is too harsh. So, dear reader, judge for yourself. Here is a slice of the transcript.

Anwar: In Indonesia, as journalists we do spend a lot of time covering issues relating to climate change and the environment simply because we feel the impact on a day-to-day basis. You ask how journalists should cover climate change. I should say with great passion, with activism, and reveal the truth of what’s happening.

For example, I live in Jakarta. Here in Sydney and perhaps in Melbourne maybe it feels real that climate change is making an impact on daily life, but Jakarta is one of the most polluted cities in Asia, I go about every day with an air purifier because the air quality is so bad and a lot of it is due to man-made things such as exhausts, industry – we are still using a lot of coal.

The government has decided to move the capital, Jakarta, to another part of Indonesia; on an island in Kalimantan. This is because it’s sinking. It’s sinking because sea levels are rising, and we are chopping down mangroves on our coastline. At the same time we are creating the problem, because every time we build in Jakarta we actually use groundwater. Everybody extracts water from the ground. So we are sinking at the rate of 11 to 12 centimetres a year. This is a real problem because by 2050 the northern part of Jakarta will be under water.

I think that we actually need feel it, to see the images. Clean air should be a basic right. Clean water and access to water, should be basic rights too. These are the fundamental things we need as humans. So yes, climate and environmental issues should be tackled with a sense of urgency.

Indonesia’s president, Joko Widodo, announced the relocation plan on 16 August. At least one and a half million people will move eventually to the new capital. Jakarta’s air pollution, however, is not a consequence of climate change, nor is the city sinking because of climate change-induced sea-level rise. The key driver of its increasing groundwater consumption and subsidence is population growth on a flood-plain.

Consider the data. Jakarta is the largest city in Southeast Asia and fourteenth-largest on the planet. Jabodetabek, the official metropolitan area, contains over 30 million people and has a population density of 15,342 people a square kilometre (39,740/square mile). As for the country as a whole, it currently has 270 million people. Almost 60 per cent of them live on Java. In 1950, however, it was only 70 million. According to the Jakarta Post, it has doubled in just 40 years, from 119 million in 1971 to 240 million in 2010, and will reach 273 million next year.

While the current annual growth rate of 1.04 per cent seems low, it will still produce a further significant increase in the decades ahead. The latest UN World Population Prospects (2019 Revision) expects another 20 per cent increase, to at least 335 million, by 2055.

According to Wiryono, a Jakarta Post author, the country’s high Muslim population has produced an unsustainable birth rate. “Unfortunately, Indonesia’s attempts at family planning education and population control have not been very successful, and it’s hard to say how sustainable the country’s growth will be.

As for climate change-induced sea-level rise, one has to be sceptical: according to a recent empirical study, “the sea levels of the Pacific Ocean have been remarkably stable” since early last century.

Karvelas: How do you grapple with your role as an independent journalist and a climate activist? Are you concerned by the possibility of being seen as an activist, because there is a fear, of course, it could tarnish your journalism?

I ask a lot of questions of our policy-makers on issues such as palm oil. There is always this idea that we are an economically developing country, therefore we need to rely on our resources. We need to use our commodities and sell them. But there are ways of doing it where sustainability and development should go hand in hand; such as using technology, for example, putting “green economy” into the policy and always having that as an underlying principle. (5 min.)

Now in Indonesia we have very ambitious targets for reducing the amount of greenhouse gases. We are one of the highest producers of them. What that means at the end of the day is that if we ruin where we live – if we ruin our own house – we are the ones who will feel the impact. And that is what we are doing on this planet at the moment. So I think it should not be an intellectual discussion about – you know – the science of it, but it should be about what can we do, what is the best way of doing it; and how we can best mitigate; and what can we do now, because we are not talking about the twenty-first century, about 2050. One and a half degree rise in temperature – or two degrees – I think we will reach that point in 2050 and that would be disastrous for the entire planet.

The palm oil issue is ultimately a population-poverty issue too. Twenty million Indonesians work in the palm oil sector. While it has alleviated some poverty, the plantations certainly cause deforestation, seasonal smoke haze and threaten several endangered species. If the European Union proceeds to ban crude palm oil (CPO) from use in raw bio-fuel materials by classifying it as a non-sustainable product, Indonesia could leave the UNFCC 2015 Paris Agreement. Coordinating Minister for Maritime Affairs Luhut Binsar Pandjaitan put it this way: “”If the United States and Brazil can exit from the climate deal, we will consider it as well, because it is linked with the interests of the Indonesian people.”

Karvelas: How has journalism changed over you career?

Anwar: We have lost the capacity for in-depth discussion. There’s a code of conduct and there’s the ethics behind it.  At the same time the way people are consuming news has changed too. They want things to be fast, to be instant. That’s a real challenge for journalists today. I personally feel that we really have to start thinking about what exactly is our role in a society that is increasingly polarised, so to speak, increasingly emotional, increasingly reactive, where there is a lot of anonymity around communications so that people feel they can say whatever they like. What do we make of it? We have to ask what is the role of journalists in a world which is so chaotic and full of distraction?

Indonesia is affected by other natural disasters, such as earthquakes and tsunamis. They also have nothing to do with climate change, but arguably have a greater impact. The Sunda Arc hosts some of the most capricious – and explosive – volcanoes on the planet. About 127 active volcanoes are monitored in an attempt to provide early warnings to the millions who choose or are forced to live near them, presumably because of demographic pressure.

So how should journalists cover climate change in the age of Deep Fake, where news has morphed into infotainment? Great passion and activism look good on screen, but if you want the truth, you have to dig deeper. Putting facts before feelings – and climate tears – would be a good place to start.

So as the floods, droughts, cyclones, typhoons and heatwaves continue to hit, check out the dodgy discipline of extreme weather attribution before answering the question: to what degree climate change is responsible?

The global climate is what the IPCC used to call “a coupled non-linear chaotic system”, one in which “long-term prediction of future climate states is not possible.” (IPCC 3rd Assessment Report; Section 14.2.2.2, p. 774, 2001). That was before the climate catastrophists and wealth-redistributionists keen on “climate reparations” gained the ascendancy.

It has been in a state of unpredictable change ever since the planet acquired an atmosphere. They call it natural variability. Nothing that humankind – the United Nations, Extinction Rebellion, activist doctors, lawyers, corporations, and Greta, Little Lady of the Apocalypse will change that.  There is, alas, no Goldilocks climate just right for everyone everywhere, and forever. Nature is under no obligation to recognise our “right” to such a state, however earnest the pleas from those who claim they are speaking on its behalf.

Fortunately Australia is well-placed to assist relieve Indonesia’s population pressure. It owns a virtually uninhabited spot conveniently located only 184 nautical miles off the coast of Java: an ideal entrepôt for persecuted minorities and folk fleeing Islamic fundamentalism. Purchased from Singapore in 1958 for only 2.9 million pounds sterling, its name is Christmas Island.

Professor Bolt and the dunce Quiggin

Climate Alarmism of the Greenest Hughes