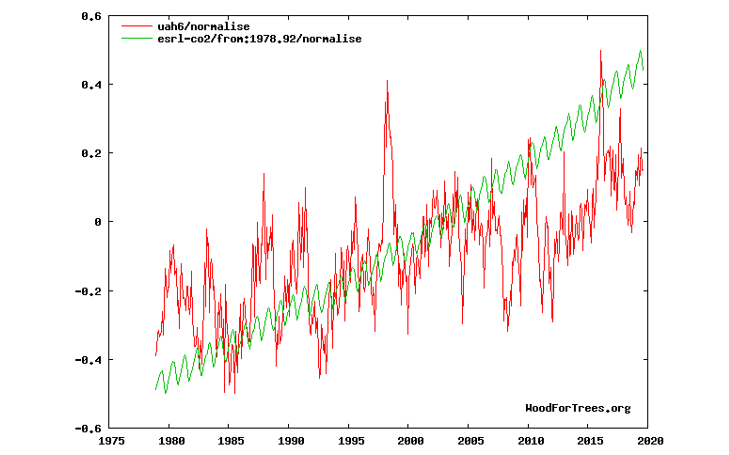 A friend of mine, Geoff Hogbin (Free to Shop, CIS, 1983), made an incisive throwaway comment some time back which has stuck with me. How would the climate models do he said, sceptically, if they were required to perform across data from the end of the Industrial Revolution; from say the mid-nineteenth century. Of course, there is a data problem. Or I imagine that there is.

The official atmospheric concentration of CO2 measured at Mount Mauna Loa in Hawaii goes back only to 1958. HADCRUT temperature data on a global scale goes back to 1850 but you have to ask how consistent are the temperatures recorded in the 1850s with those in the last ten, twenty and fifty years? Satellite temperature data which is probably more reliable than land and ocean-based measures only goes back to the end of 1978.

If it were possible, I would like to see the climate models applied to separate sub-periods, at least back to 1850, to see how they perform. I will guess. They wouldn’t do too well. But my prejudice is showing.

When, four decades ago, I dabbled in econometrics, an important test of a model calculated over a whole data series was to see how it performed using only the first half of the data set and then separately the second half. Was it good for all seasons? Usually it wasn’t. Conclusion: throw it away and begin again.

Almost all of the climate models have over-predicted global temperatures. Or, again, I think that they have. It is easy to find commentaries which say that they have a pretty good record overall, as it is to find the opposite. Hard for us ordinary punters to get a handle on it.

Personally, I think it best we all do our own simple research and cling to hope that it is not simplistic. I mapped HADCRUT4 data from 1958 across CO2 data. Without wishing to be boring, I normalised the data and compared least square lines. A first thing to note is that the trend of CO2 is much steeper than temperature. A second thing is that an inflection point occurs at about 2008 as the CO2 trend line increasingly leaves behind the temperature trend.

I checked this result using normalised satellite data from end 1978 (UAH6). The graph is reproduced atop this post. A different but comparable inflection point occurs roughly during the period 2006 to 2008. From there the temperature has trended up but very slightly while CO2 bounds on ever upwards.

However, alarmists – for want of a less-loaded term – believe that the effect of CO2 is being, and will be, net reinforced by other factors contingent on CO2 warming. These include increases in water vapour (a powerful greenhouse gas) and the effect of reducing ice cover lessening albedo; the fraction of solar radiation reflected back into space by the Earth’s surface. There may be others. I don’t know, I am not a climate scientist; thankfully. Honest and your sacked.

Some climate commentators (scientists?) have suggested that we may be approaching a tipping point when warming will start running way. But if you look at my graph you will see, comfortingly, that since 2008 the temperature is behaving as you would expect if the CO2 greenhouse effect were dwindling. The reinforcing factors do not appear to be having their wicked way. If they were, we should see temperatures at least keeping pace with CO2, I would think. I believe we can relax.

All this, as well, assumes that man-made CO2 is responsible for the recorded rise in atmospheric CO2 and that this, in turn, has caused much of the warming evident since the end of the little ice age. If these assumptions are baseless, as they might be, there is even more reason to relax. Relaxing is not the preferred position of Extinction Rebellion (ER) co-founded by Roger Hallam.

I heard Hallam being interviewed on the BBC though a link on this site’s ER (Essential Reading). I have to say I like him. He is committed. Unlike many so-called conservatives on Q&A, not the least bit pantywaisted. We are going to die unless we act now. Nothing that governments have done or are doing comes remotely close to being effective, he said with vehement conviction.

And he is right; absolutely right. You could be forgiven for thinking that governments are relaxed. If they were not thousands of nuclear power plants would have been already built worldwide since the ‘crisis’ was identified in the 1980s and yet many more would be under construction.

But, of course, no one outside of the ER crowd, David Attenborough and other assorted hysterics is really that concerned. It’s no more than a virtue-signalling game to Australian teachers encouraging their pupils to skip school to engage in pointless, purposeless, posing. Do you think any of them think that we only have ten to twelve years left to act – whatever ‘act’ means. Of course not.

God forbid we have a real global crisis to deal with. Either we won’t believe it after suffering this present hoax or we’ll think that the equivalent of building some windmills will solve it. What global warming / climate change/ climate emergency (choose your favourite) has shown is that large sections of humankind are susceptible to hysterias promoted by elitists; and that governments are singularly incapable of acting resolutely to combat crises to which they say they subscribe. Surely God exists. Better than this there must be.

The CSIRO sold us a PUP