WITH North Queensland drowning and the Murray-Darling system dying, what better time to revive the 80-year-old Bradfield Scheme to turn the coastal waters inland? That’s the dream of a dedicated group of Queenslanders who believe that modern technology and inventive financing can solve problems that always put the Bradfield Scheme in the ‘too hard’ basket.

The 2019 Group, which prefers to remain anonymous at present, includes a retired Queensland businessman, a former senior government bureaucrat, and has the backing of one of the most successful engineering development groups in the state. Fortuitously, a start has already been made, at the site of the pivotal dam for the project, at Hell’s Gate on the upper Burdekin River. The Northern Water Infrastructure Development Fund financed a $2.2 million feasibility study by SMEC, the Snowy Mountains Engineering Corporation, which was completed last year. It confirmed the viability of an irrigation and hydro-electric project using water from the dam, and put the cost at $5.35 billion.

The Commonwealth government has already committed $54 million towards Phase I, which includes detailed engineering studies and a weir on the Burdekin at Big Rocks, to guarantee water supply to Charters Towers. This was part of the undertaking extracted by Bob Katter, member for Kennedy, for his support of the minority Morrison government.

The history of the Bradfield Scheme has always been dogged by politicians’ rejection after their initial enthusiasm. The first was Queensland Premier William Forgan Smith in 1938, who was excited by Bradfield’s personal presentation, but repelled by his top-of-the-head estimate of £30 million. The Chifley Government in 1945, the Queensland Hanlon government again in 1947, the Bjelke-Petersen government in the early 1980s and the Beattie government in 2007 all revived the Bradfield scheme, only to see the idea run into the sand. It always foundered on the issues of cost to the taxpayer and economic return. It has also been a favourite sneer by academics and historians. Dr Robert Wooding contributed a put-down essay “Raising the ghost of Bradfield” to a pessimistic ANU monograph entitled “Australia under Construction.”

But enthusiasm has bubbled away over the years. Proponents have included at various times, National Party leader Ian Sinclair, businessman Richard Pratt, broadcaster Alan Jones and politicians, most recently Peter Beattie and Bob Katter. Bradfield himself always got a good hearing, as a result of his engineering reputation as the builder of the Burrinjuck Dam on the Murray and the Sydney Harbour and Brisbane Story bridges. But it was never enough. 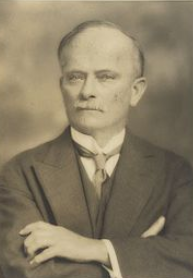 John Bradfield (right) originally intended that diverted waters would flow down the Thomson River to Lake Eyre. He relied on meteorological advice that a permanent body of water would raise the rainfall in the surrounding inland. But that was in the 1890s. In later years this theory was comprehensively debunked. Not only would the increased humidity have little effect locally, the evaporation in the shallow lake would prevent it ever filling permanently. Since then, other minds realised that greater benefit would accrue from channelling the Thomson waters to the Warrego, to feed into the Darling system.

The SMEC  study for the Hell’s Gate dam was managed by Townsville Enterprise, an organisation promoting development of the region. It sees the dam principally as an additional water supply for the city but also supporting significant irrigated agriculture. Some of its projections – for example, creating 12,000 new jobs during construction and 5,000 thereafter, appear over-enthusiastic.

A close reading of the 850 pages of the SMEC report may bring the flag-wavers down to earth. The Hell’s Gate dam was feasible, in both engineering and economic terms it said, but as much as a decade of work was needed for engineering studies, soil surveys, environmental impact study and heritage considerations before the project would see the light of day. Its calculations were based on a dam 600 metres wide and 50 metres high impounding the 2,000 megalitres of water needed to feed a downstream hydro-electric power station and irrigate 50,000 hectares of crop land. The stream studies pointed out that while the mean annual flow in the Burdekin was 1160 gigalitres, it could vary from 6400 gigalitres in flood years to as little as 63.3 gigalitres in dry years. And with the seasonal flow restricted to the period January to March, the mean average evaporation of nearly two metres actually exceeded the annual rainfall.

The plan being put forward by the Queensland 2019 Group builds on the work already under way, but wants a bigger, 120-metre high dam at Hell’s Gate to impound the water needed for its inland ambitions. It would augment the supply by tapping waters from the Tully, South Johnstone and Herbert rivers. Downstream from the dam and its irrigation works, the water would be tunnelled through the Great Dividing Range for Stage 1 – to develop fertile black soil country from Charters Towers to Richmond.  Stage 2 would take surplus water from the Thomson River to the Warrego to benefit the ailing Murray-Darling system.

The group proposes a new funding model – issuing debentures backed by Commonwealth and state government guarantees – to overcome the past objections to using taxpayers money. Government budgets would be exposed only if the scheme failed, or irrigation water had to be subsidised. The total cost of the scheme was put at $15 billion. Detailed financial studies would be needed to prove that the coupon payments on the debentures could be met.

But what is needed first, it argues, is an expert agency, such as a Queensland Northern Rivers Authority similar to the Snowy Mountains Authority, to prove the concept, determine its parameters and then build and manage it to full operation. Legislation would be needed, but the Authority would be self-funding. The government would be the facilitator not the funder.

Apart from the contribution to the government’s target of doubling Australia’s agricultural output, the new Bradfield proposal would breath new life into many outback towns down the rivers, refresh the Murray Darling system and relieve drought, the proponents argue.

Before governments can be convinced to support such ambitions, it will no doubt take note of the reservations in the SMEC report on the much more modest scheme for Hell’s Gate water: The cost of water is likely to restrict the viable cropping opportunities; The absence of a water allocation of allowance under the Burdekin Water Plan; and The capacity of markets to absorb significant additional horticultural production.  The 2019 Group answers this last point by envisaging air shipments of fresh food to Asian markets.

Can governments – commonwealth and state – be interested?  In an election year, will another generation of politicians run from the ghost of  John Jacob Crew Bradfield?

11 thoughts on “The Bradfield Scheme Reborn?”

Posturing and Piffle at the Academy of Science