The Warmists Are Starting to Sweat

Over the next week the report being finalised at a United Nations Intergovernmental Panel on Climate Change (IPCC), meeting in Korea, will see an outpouring of alarmist material.  Doom-laden factoids and forecasts will be released, all designed to head off an impending collapse in the “consensus” that reached its apogee in the Obama era.  Culminating in the 2015 Paris Agreement, an EU-US axis led policy development on regulatory measures to suppress emissions of carbon dioxide and other greenhouse gases. Most fundamentally the strategy involved bearing down on the use of coal and other fossil fuels to the electricity supply industry and replacing these sources with wind and solar.

Developed countries agreed to reduce emissions by around 26%;  successful developing countries, such as China and India, said they would fall into line 15 years hence. On the strength of this dubious promise no disciplines were placed on them, while they welcomed the self-mutilating actions of the developed world which enhanced their own competitiveness.  The emission-supressing coalition was rounded out by a slew of failing developing nations brought into the tent by the promise of a $100 billion annual fund to fill their begging bowls and finance the lifestyles of their elites.  Fat chance of that ever eventuating.

From the meeting in Korea we can expect more of the same: droughts, floods, hurricanes and reduced food production, with higher temperatures also bringing about pestilences, mass extinctions and the long-predicted but never-seen “climate refugees”.  Further claimed outcomes will include the progressive disappearance of the Great Barrier Reef, and soaring infrastructure costs as rain (or is it drought?) undermines foundations of roads and buildings.

There’s not the slightest evidence any of these outcomes will occur anywhere but in their advocates’ imaginations. Indeed, over the past 40 years, during which time greenhouse gas concentrations in the atmosphere have increased 30%, we have seen the planet greening by 11%, with all this implies for agricultural productivity, Meanwhile, hurricane activity has actually fallen, contrary to what the climate careerists would have us believe.

There has been no increase in drought or warming-induced fires.  Slogans about permanently lower rainfall were promoted by the icons of the left. You know the shtick: “the dams will never again fill”, “the Murray Darling will never again flow as it once did” ad nauseam. Professor Ross Garnaut even said the Murray Basin would not support irrigated agriculture 50 years on.  All of these are shown, as events unfold, to be just so much hype, but the warmista warriors barely pause for breath before alighting upon the latest weather anomaly, whatever it might be, as being the precursor of a deadly new trend.

Scientists, sociologists, diplomats, renewable energy suppliers and others have feasted royally from the largesse their data manipulations have caused governments to confer upon them.  Make no mistake, with the US taking its support and, more important, its cash out of the Paris agreement, they understand the gravy train is about to be derailed.

Part of the panic of the global climate change fraternity has come from a realisation that the temperature rise from the projected doubling of CO2 is just not occurring.  The average of the 32 climate models examined by John Christy at the University of Alabama is for a 2.4°C per-century warming, but the actual level since records began in 1979 is not much more than 1°C per century. 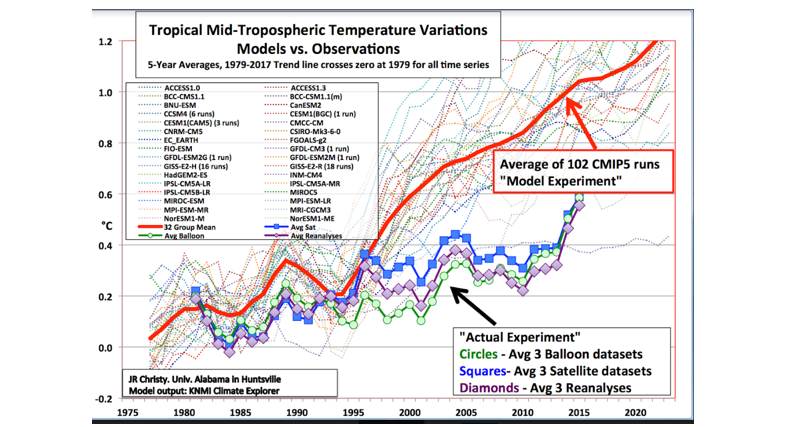 This is similar to the projections of eminent scientists Richard Lindzen and Donald Trump’s new adviser Will Happer.  And using the IPCC data itself, on the basis of future emissions, it is difficult to find a scenario where temperatures will rise much above 2°C by 2100.   Hence the IPCC’s sudden emphasis on depicting disturbing outcomes from lower temperature increases than the alarmists have previously focussed upon.

The Trump victory of less than two years ago threatens the diversion of taxpayers’ and electricity consumers’ money to the warmistas much more directly.  The outsider’s triumph is undermining this self-interested assembly, not only because of the size of the US economy itself, but because Trump’s rejection of emission reducing regulations entails consequences in terms of the competitiveness of the US for industry location.  The US is proving a magnet at the expense of those that have imposed climate costs on their electricity industries.  Especially hit is the EU but also, as can be seen with Visy’s investment strategy, is Australia.

Morrison government claims Australia will beat its own Paris targets at a canter. The destruction so far of the fossil fuel supply share in Australian electricity production and the high levels of exorbitantly subsidised renewables may well mean this is true for the electricity industry. However electricity supply accounts for only around 30% of emissions, with the rest coming from agriculture, transport and industry.

The activists correctly recognise that achieving such reductions elsewhere in the economy will be even more difficult than with electricity.  As if to emphasise this, already there are calls for a culling of national livestock herds by 25% or more. The Morrison government, instead of following Trump and staging a full-scale departure from Paris is saying it will continue the process of replacement of carbon intensive activities.  This is a terrible error – perhaps dictated to the PM by his NSW Liberal Party support base, where warmism is far more in evidence than conservative nous. It also means the Liberals have no clear demarcation from the ALP.  Abandoning the Paris Agreement and all subsidies to renewables, both through regulatory arrangements like the Renewable Energy Target and via direct budgetary disbursements, would yield at least $4 billion in savings and perhaps more.

If Australia fully abandons the Paris Agreement and the subsidies and regulatory restraints that it encompasses, this would staunch the flow of Australian investment to the US and encourage investment from other countries to these shores. Perhaps of more importance as an electoral play, abandoning all subsidies to all renewables will allow Australia to reclaim the position of the world’s cheapest household electricity supply – a position we held 15 years ago before the renewable energy poison pushed us into becoming the world’s dearest.

Such a strategy is quite possibly the main chance of the Morrison government getting itself re-elected.

Alan Moran of Regulation Economics is the author of “Climate Change: Treaties and Policies in the Trump Era”

But will it get the green out?