When ‘Truth’ is Plastic

In another life, when I was living in New York and the winters were too much to bear, I’d often head for a hammock in the Dominican Republic. The local beer, Presidente, is one of the finest drops on the planet, the locals less likely to rob you than in neighbouring Haiti or Puerto Rico and the beaches are first-rate. You can perhaps imagine my distress when, over this past weekend, a barrage of stories appeared around the world to the effect that those stretches of clean, golden sand I remember so fondly are being ruined by a seaborne invasion of plastic detritus.

The stories’ accompanying video, provided by the Parley for the Oceans NGO, seemed to sum up the case that, yes, just as environmental activists have been claiming, the seas are awash with plastic and humankind simply has to do something about the crisis before it is too late. True, environmentalists say that about every latest “threat”, but the footage of old bottles, Styrofoam chunks, discarded rubber gloves and orphan thongs rocking against the shore was persuasive. The rubbish is so thick you can’t make out the water, just a floating carpet of ugly trash undulating with the movement of the waves beneath. A still from that footage is embedded below. But before you write a cheque to the NGO which distributed the footage to eager and unquestioning news outlets, read on. 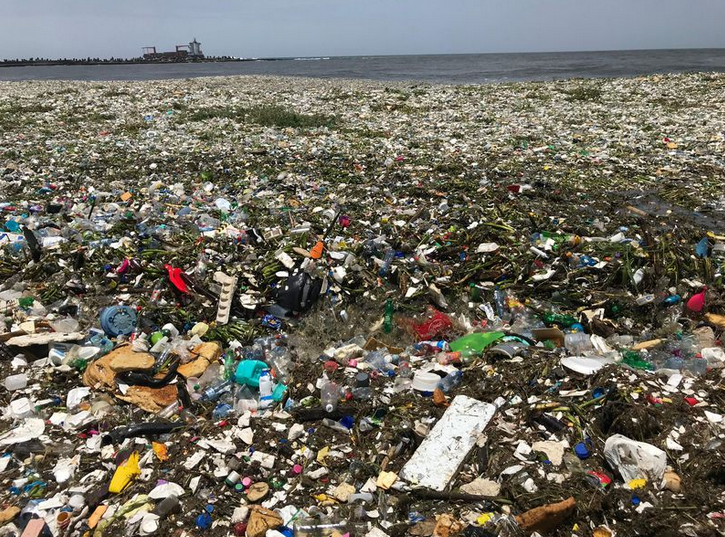 As with so many other green scares, like the Great Extinction furphy Tony Thomas has dismantled, the floating garbage blanket is not what it seems. Indeed, it is nothing like it seems — or, by the same token, anything like the way it has been presented by Time, the Smithsonian, SBS, BBC, Al Jazeera, CNN, plus too many other media outlets to mention.

This where a little local knowledge is a blessing, as it was the beach named in all those reports, Playa Montesino, which gave the game away.

Antonio de Montesinos was a member of the Dominican order and Spanish missionary who landed in what is now the Dominican Republic early in the sixteenth century. He made quite an impression, not least because he lambasted the conquistadores for their abysmal treatment of the natives. Several centuries later, a gigantic statue was erected in his honour at the mouth of the Ozama River. That’s him at right, gazing out to sea as he calls heathens unto God. The plastic-battered beach, a negligible stretch of sand no sane bather would visit, plastic tide or not, is at his feet.

Why would swimmers spurn a beach described by CNN and just about every other report as “a pristine shore”? Let’s answer that step by step, first by taking a look at the Google earth image (below) which shows the sprawl of Santo Domingo, the capital. Notice the river which empties into the sea beneath the “zona colonial” annotation. That’s the Ozama ending a journey which began high in the mountainous hinterland. 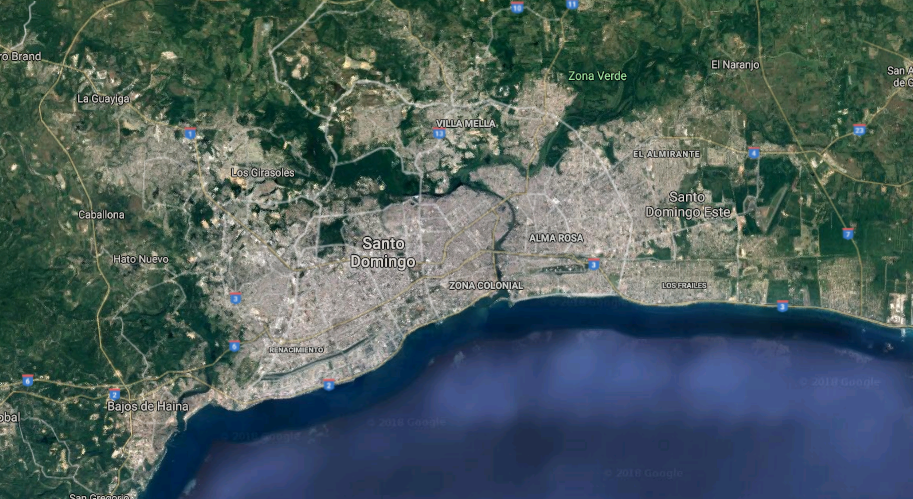 Now let’s move in for a closer look. Playa Montesino is circled.

The key topographical element to note is that man-made triangular headland on which the Montesinos statue stands. What happens, do you reckon, when the Ozama is running high, which happens every year at this time, the Caribbean rainy season?

The first thing that happens is that every item of trash beside the 140km river’s course is swept into the water and carried to the sea. When it gets to that headland, the current is squeezed through the narrow gap and this sets up a gyre in the promintory’s lee. If there is rubbish in the Ozama when it gets to Santo Domingo, a big portion of it ends up on Playa Montesinos — and from there, with a lot of help from NGO Parley for Oceans, into news reports the world over. Add the prevailing onshore wind and there will be even more beach-bound plastic to make for shocking footage on the nightly news.

And the thing is, while the Dominican Republic has many, many lovely people — especially those bringing the next Presidentes to your hammock — Third World standards of rubbish removal prevail, as even the national government admitted in a state-funded documentary (below)

So there is nothing about the recent spate of news reports that in any way reflects the truth.

The garbage was never at sea in the first place; it comes straight from the hinterland.

The beach isn’t and has never been “pristine”, not least because the city’s docks complex (just visible on the right in the third satellite shot above) and container terminal is just upstream. The only swimmers who might favour it would be those who enjoy oil slicks and water polluted by 140 kms of effluent.

And finally, contrary to what news reports would have you believe, there is absolutely nothing unusual about this example of aggregated plastic to suggest the world’s seas are choking . That may indeed be the case but this example of activist hype doesn’t prove a thing.

Undoubtedly, NGOs and enviro activists being what they are, we’ll all see that footage many times as the green push to limit plastics use continues, the enviro crusade du jour. So don’t be fooled — it’s rubbish in every sense.

UPDATE: Why would Parley for the Oceans go to such trouble whipping up a pastiche of omissions and misrepresentations? Perhaps the financial support it garners from enviro-conscious donors (below, from its website) explains a few things.

Incidentally, notice the irony in Studio Schnabel’s backing. Artist and principal Julian Schnabel, famously derided by the late Robert Hughes, made his name and fortune selling paintings encrusted with broken dinner plates. You would think a bit more rubbish wouldn’t bother him.

The Cream of Our Climate Croppers