The fall from grace of the Australian electricity industry has been breathtaking. At the turn of the century, Australia had perhaps the world’s lowest-cost, most competitive electricity industry. This rested on cheap, low-sulphur coal, which was responsible for 85% of generation, ample supplies of gas, and modest but useful hydro-electricity generation capacity.

Reform in the 1990s harnessed these assets to create a low cost, highly reliable system.  The reforms included:

This outcome was due to political intervention in different aspects of supply, including banning gas exploration and raising coal royalties. But above all else, to the adoption of carbon-abatement measures.  Those measures briefly included a carbon tax, but their fundamental drivers were increased obligations upon retailers for increasing levels of wind and solar energy under a Renewable Energy Target (RET) for “large scale” mainly wind facilities, and through direct subsidies.

Regulations require retailers to incorporate increasing amounts of designated renewable energy (almost exclusively wind and solar) into customer supplies; tradeable certificates are created and their price shows the RET subsidy is currently about $85 per MWh; there is also a rooftop installation subsidy set at $40 per MWh.  The subsidy for large scale facilities is currently capped to bring about a 16% market share by 2020.  The rooftop subsidy has no cap (installations are growing rapidly, having doubled in 2017, and now produce the equivalent of 3% of demand).  At a time when spot market electricity prices averaged around $35 per MWh, these were massive advantages to intermittent sources of generation.

Additional advantages were provided to these renewables through direct federal government subsidies and measures in place at the state level.  In total, the 2016 the value of the subsidies to renewable energy exceeded $4.5 billion.  This is considerable in the context of a generation market which had a turnover of less than $10 billion per year.

That $10 billion turnover level more than doubled once the effects of the subsidies started to bite. From under $40 per MWh as recently as 2015, the spot price is now around $90 per MWh.

This price increase is caused by the subsidised renewable electricity, being “must run”, squeezing out coal-based supplies, which need to bid at least their marginal cost.  This causes them to operate in uneconomic stop-start modes and forces closure once major capital expenditure becomes necessary.  The two most important closures were the Northern (South Australia) in 2016 and Hazelwood (Victoria) in 2017.

The chart below shows the relationship of wind’s market penetration and the spot price.

As a result of these developments, Australian prices — the white bar on the chart below — shifted from their very low levels in 1999 to present and ruinously expensive ones. Compared with other countries, as illustrated below, Australian prices are now among the world’s highest. 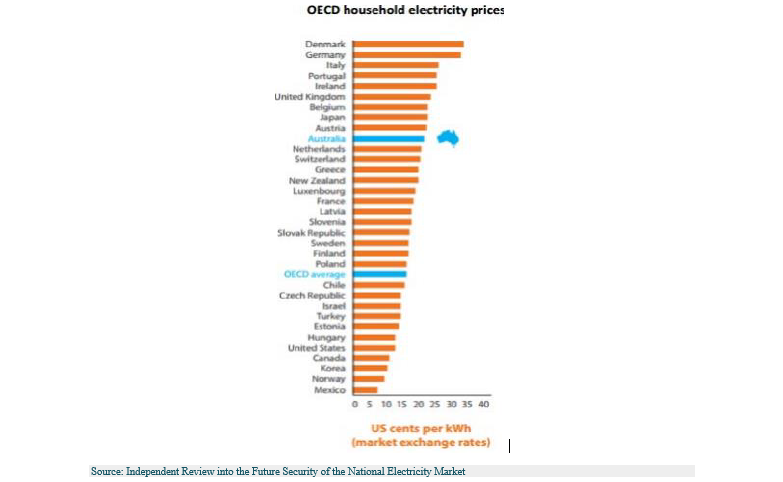 In addition to their high cost, wind generators are inherently unreliable and this caused a statewide blackout in South Australia in September 2016.  Wind and solar require additional ancillary services expenditures to fortify their reliability. Partly as a result of the realisation that renewables bring a deterioration in reliability, Australian governments have doubled-down in seeking to paper over the cracks that their policies have brought about in the market.

Those supportive of renewables argue that energy subsidies are simply a bridge to an inevitable triumph of that technology.  Over the past 40 years there have been endless forecasts that wind/solar will soon be cheaper than fossil fuel generated electricity.  With good reason, those publicising such forecasts never argue for the corollary: an abandonment of subsidies.

For Australia, wind costs are at least $100 per MWh – contracts signed at less than this include the RET subsidy (the forward price of which is $50 per MWh).  Solar and batteries are even more expensive, though batteries will likely have a role in providing ancillary services in a renewable system.  Coal-based generation with existing plant can be profitable at well under $40 per MWh — although, as discussed, not once refurbishment becomes necessary.  Some studies estimate new coal based investment in Australia requires a price exceeding $75 per MWh though studies by The Minerals Council of Australia estimated that a High Efficiency Low Emission plant would be economic at under $50 per MWh and experimental work involving gasification put the costs even lower.

All this said, the ultimate test is that of the market and the way to explore this is to allow markets to operate without government subsidies and other interferences, just as they did in Australia 15 years ago.  This will provide the most efficient mix of generation.