Further evidence that our national broadcaster is on a climate-change jihad emerged this week as ABC RN Breakfast’s Ellen Fanning chatted with Ayaan Hirsi Ali about her new book, Heretic: Why Islam needs a Reformation now. What folows are some snatches from that broadcast (emphasis added):

Ellen Fanning: So what does your reformation look like? Is it as stark as a denial of the central elements of Islam?

Ayaan Hirsi Ali: I think we have to ask if it is possible to separate religion from politics in Islam. What would we need to remove from Islam to achieve that objective? I suggest pinpointing five key aspects, including attitudes towards Mohammed and the Koran, over-investment in life-after-death and sharia law.

If you take these things out of Islam – and it is widely recognised this is unacceptable – then you are going to be left with an Islam acceptable to the constitutions of Western society. This would open an opportunity for Muslims to not have to deal with politics through the window of religion.

Ellen Fanning: Forgive me, it sounds like a prescription put forward by an atheist, which I think you are.

Ellen Fanning: I wonder how that happens. Crucial to the Christian Reformation was Gutenberg’s printing press, access to universities.

Ellen Fanning: The internet – exactly my point – has displaced this Enlightenment notion of scholarship. My ignorant opinion is just as important as your expert scholarship. You are just an elite. A professor of climate change is just an elite. How do you affect a reformation in that environment?

Arguably, fundamental to the internet is that no one opinion is more important than any other opinion, regardless of how many competing opinions you get out there, unless you can say as Martin Luther [apparently] did – ‘This is the truth, this is the way, I am the leadership and I will effect this outcome’ – don’t you have a fundamental problem with what you’re prescribing?

But what does ‘a professor of climate change’ have to do with reforming Islam? Fanning seems to be suggesting that the discipline’s ‘expert scholarship’ is being devalued somehow by its critics in the blogosphere. 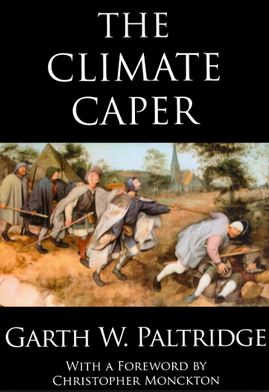 Heretics like Garth W. Paltridge, Emeritus Professor and Honorary Research Fellow at the Institute of Antarctic and Southern Oceans Studies at the University of Tasmania, former chief research scientist with the CSIRO Division of Atmospheric Research and author of The Climate Caper – facts and fallacies of global warming, the one with Pieter Breugel’s The Blind Leading the Blind on the cover.

Consider this extract from his recent essay, “Uncertainty, Scepticism and the Climate Issue” in Climate Change – The Facts 2014.

Whatever the reason, it is indeed vastly more difficult to publish results in climate research journals if they run against the tide of politically correct opinion, which is why most of the sceptic literature on the subject has been forced onto the web, and particularly onto web-logs devoted to the sceptic view of things. This, in turn, is why the more fanatical believers in disastrous anthropogenic global warming insist that only peer-reviewed literature should be accepted as an indication of the real state of affairs. They argue [like Fanning] that the sceptic blogs should never be taken seriously by ‘real’ scientists, and certainly should never be quoted. (page 153)

The take-home message is that there is more than enough uncertainty associated with forecasting climate to allow normal human beings to be reasonably hopeful that global warming might not be as bad as currently stated. Climate scientists, and indeed scientists in general, are not so lucky. Largely as a consequence of their decision to insulate themselves from sceptical [heretical] opinion, they have a lot to lose if time should prove them wrong. (page 154).

Heretics like Richard Lindzen, the distinguished American atmospheric physicist, known for his work in middle atmosphere dynamics, atmospheric tides and ozone photochemistry, author of more than 200 scientific papers and books.

In a speech at a UK House of Commons seminar in February 2012 — and later in other public fora — Professor Lindzen gave his take on the ‘current state of climate knowledge’.

I will simply try to clarify what the debate over climate change is really about. It most certainly is not about whether climate is changing: it always is. It is not about whether CO2 is increasing: it clearly is. It is not about whether the increase in CO2, by itself, will lead to some warming: it should. The debate is simply over the matter of how much warming the increase in CO2 can lead to, and the connection of such warming to the innumerable claimed catastrophes. The evidence is that the increase in CO2 will lead to very little warming, and that the connection of this minimal warming (or even significant warming) to the purported catastrophes is also minimal. The arguments on which the catastrophic claims are made are extremely weak and commonly acknowledged as such. They are sometimes overtly dishonest.

Heretics like Judith Curry, climatologist and former chair of the School of Earth and Atmospheric Sciences at the Georgia Institute of Technology. Curry is a member of the National Research Council’s Climate Research Committee, co-author of Thermodynamics of Atmospheres and Oceans (1999), and co-editor of Encyclopaedia of Atmospheric Sciences (2002) and over 140 scientific papers.

Curry’s expert scholarship suggests confirmation bias – ‘an overconfident assessment of the importance of greenhouse gases in driving future climate change’ – has compromised agency impartiality, raises doubts about confidence levels for climate model projections (not predictions) and so on.

Demonizing anthropogenic carbon dioxide and promoting dubious notions like climate “stabilisation” have helped create an incestuous feedback loop between politics, science, and science funding. For Curry (and other heretics): “there is a lot going on that cannot be explained – directly or even indirectly — by warming from greenhouse gases.” The planet’s climate is even less sensitive to atmospheric carbon dioxide content than previously thought, she argues in a recent paper.

And so on and so forth.

In the West, it took centuries to get religion out of politics. So changing the minds of religious — or climate — fundamentalists will be a tough gig, without divine intervention.

Getting religion out of science (again) – and vice versa – is another big challenge at this stage of the climate game. The Vatican is expected to urge the faithful to get with the catastrophist project in a mid-year encyclical designed to influence the United Nations Framework Convention on Climate Change meeting in Paris late 2015. Welcome news for those who have The St Francis Pledge to care for Creation and the poor online at the Catholic Climate Covenant. Established faiths are faced with the choice of either ‘going green’ or losing spiritual market share. So the merging of climate-environmental and faith-based rhetoric is no surprise. Church liturgy has been warming to eco-themes like sustainability and greater “reconciliation” with Nature, repentance and social justice for some time.

So it may be too late to warn some folk about being taken in by what Nietzsche called ‘the theologian’s trick’ of mingling scientific knowledge with superstition and speculation. Religion and genuine science, as he noted (Human, All too Human, 1878, section 3, 110), “live on different stars.”

Yet religion should not pass itself off as science. Conversely, (post-modern climate) science should resist the temptation to proselytise, to politicise and to encourage “a religious comet to trail off into the darkness, making suspicious everything about itself that it presents as science”, especially where its arguments – and ‘expert scholarship’ – lack precision, clarity and evidence.

Michael Kile  does not work for, consult to, own shares in or receive funding from any company or organisation that would benefit from this submission. He has no relevant affiliations, except as author of No Room at Nature’s Mighty Feast – Reflections on the Growth of Humankind and The Devil’s Dictionary of Climate Change.

Sceptic at the Herald