The Edge of a Cold, Deep Abyss?

There was a time in climate science when tree rings were used for good instead of evil, a time of innocent enquiry, a time that ended in the corruption of science.  From that time, one of the best predictions of climate ever made (weighted for distance and accuracy) was by two Californian researchers, Leona Libby and Louis Pandolfi.  In 1979, they used tree ring data from redwoods in Kings Canyon to make a remarkably accurate forecast1.  From a Los Angeles Times interview of that year,

When she and Pandolfi project their curves into the future, they show lower average temperatures from now through the mid-1980s.  “Then,” Dr. Libby added, “we see a warming trend (by about a quarter of 1 degree Fahrenheit) globally to around the year 2000.  And then it will get really cold—if we believe our projections.  This has to be tested.”

How cold? “Easily one or two degrees,” she replied, “and maybe even three or four degrees.”

Three or four degrees!  That would be worth confirming wouldn’t it?  Confirmation had to wait almost 30 years later in a conference poster by Finnish forestry workers (Timonen et al 2007):

The tree ring readings of the Finnish foresters are predicting a large decline in temperature bottoming out in about 2045.  The downturn you see on the right hand side of the graph is larger than any other in the last 500 years.  A cold period longer and deeper than any other in the last 500 years would have lots of real world consequences.  That would be worth following up on, wouldn’t it?

Well, we now have a way of cross-checking the tree-ring based predictions.  A just-released climate model using a notch-delay filter has the promise of providing much higher resolution in climate forecasting.  Using historic TSI data, the model can see out to 2025: 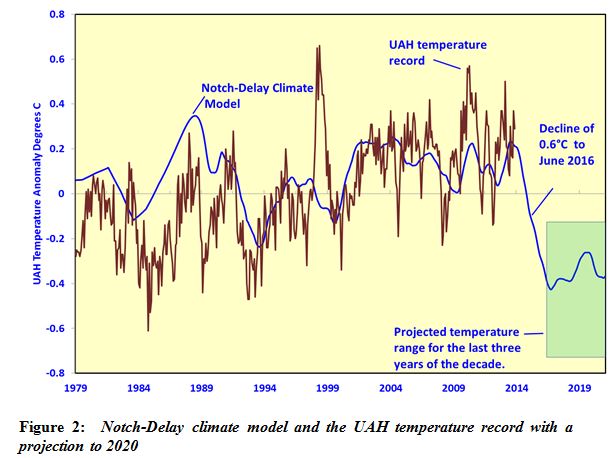 The figure above shows the model output plotted against the UAH temperature record.  It shows a very steep decline, starting in late 2014 and ending in June 2016.  After that it trends sideways for the rest of the decade.  The green box shows the expected temperature range in this period.  The predicted decline to mid-2016 is 0.6°C.  That is not remarkable in itself.  There are a few declines of that magnitude in the 34 years of the satellite record.  The remarkable thing will be that the temperature will not bounce back.

We can predict out a further couple of decades using a prediction of Solar Cycle 25 peak amplitude of 7 (Livingstone and Penn) and the Lean 2000 TSI reconstruction back to 1610 as an indication of what TSI will fall to under Dalton/Maunder Minimum-like conditions: 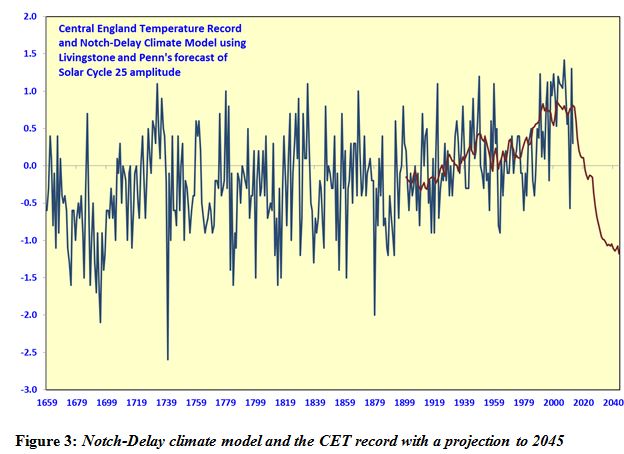 The figure above plots the notch-delay model output against the Central England Temperature (CET) record.  The hindcast match is good.  The interesting thing is that the projected temperature decline of 3.0°C is within the historic range of the CET record.  The low is reached about 2045, lining up with the projection from the Finnish tree ring study.  Maunder and Dalton Minimum-like levels of solar activity will be associated with temperature levels similar to those recorded during these minima.  There is nothing remarkable about that observation but it seems to be needed to be said. 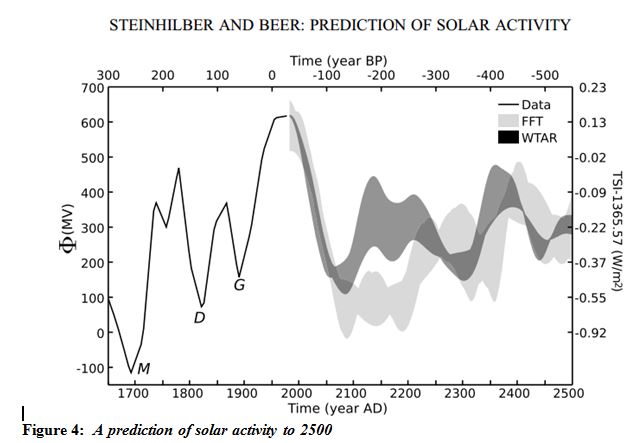 Let’s go on to consider some of the real world impacts of the temperature decline coming.  The big one is the reduction in agricultural production in prospect.  Back in 1980, Newman determined that each 1.0°C change in annual average temperature moved the Corn Belt 144 km.  The Midwest gets more polar amplification than the CET record so the temperature decline in prospect is larger at 4.4°C.  From the Corn Belt, this is the prediction for Whitestown, Indiana.

There is another paper deriving Dalton-like levels of solar activity by the second half of the century.  From Steinhilber and Beer in 2013: 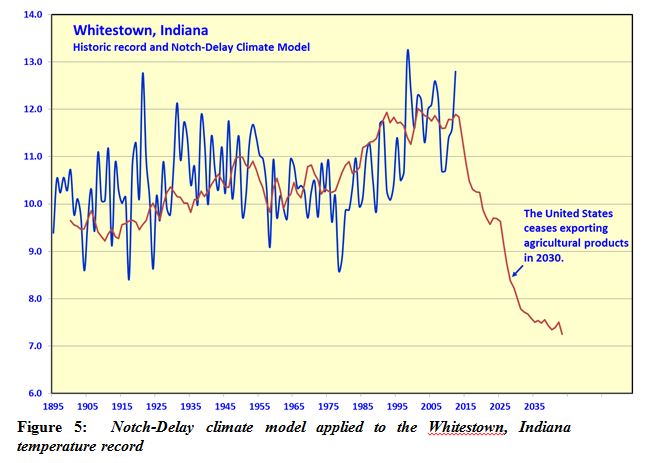 There are several factors that affect agricultural productivity:

All things considered, the production decline for US agriculture could be 8% per 1°C.  A fall of 3°C and the United States would be out of export markets for agricultural products, with the same true of most mid-latitude grain exporters.  This will have profound geopolitical implications – namely, starvation and collapse for countries that import food.  That’s for next decade.  This decade, once the temperature decline is widely apparent, currently importing countries around the world will rush to stockpile, bringing forward the price effect of scarcity.

If this sounds like the reverse echo of the global warming crowd, how often have leftist wealth-redistributors been right about anything?  Given their track record, the exact opposite is the more likely outcome.  We should be ever thankful to them though. If it wasn’t for their melodramatic predictions attracting honest scientists into the climate science field, humanity would be sleepwalking into the climatic and agricultural disruption that is coming.  We will still have the consequent famine and death but we will know what’s causing it at the time.  We are on the edge of that abyss.  A vale of tears awaits.  Good luck to all of good heart.

P.S.  Cold-driven famines over the last few hundred years are well documented.  Severe cold in the 1690s killed 30% of the population of Finland, and lesser percentages of other countries from France to Sweden.  In Ireland, 20% of the population died in 1740, one hundred years before the more famous potato famine.  In 1816, the Swiss were eating their cats, dogs, rats and horses.

The Settled Science of Refusing to Debate

Ruining the environment to save it