Indonesia – unlike our media circus – has more to worry about than a few asylum seekers or the misadventures of a convicted high-grade hydroponic happy-weed importer. It also has to monitor 127 active volcanoes, ensure the safety of millions living near them, try to control lava-loving tourists and deal with growing demographic pressures.

The Sunda Arc hosts some of the most capricious – and explosive – volcanoes on the planet. Consider two recent examples – Mt Sinabung (northwest Sumatra) and Mount Merapi (central Java): Mt Sinabung erupted (again) on 1 February this year. It was bad timing. On advice from the Centre for Volcanology and Disaster Hazard Mitigation (PVMBG), about 14,000 evacuees from outside a five-kilometre exclusion zone were returning home.

According to Sutopo Purwo Nugroho, spokesman for the National Board for Disaster Management (BNPB), a local television journalist, four high-school students and their teacher were among the fourteen who perished in a pyroclastic flow. They had been trying “to see the eruptions up close.”

“Mount Sinabung remains on the highest alert level,” he said. “On Monday night, 19,126 people had fled their homes. We expect that number to rise.”

More fatalities are possible, as trespassing into restricted areas to check houses and crops is common; and more eruptions. Sinabung is now a Level 4 (“danger”) event, with an evacuation zone of seven-km. 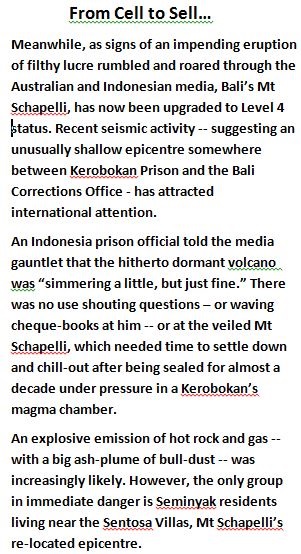 “Volcanoes erupt in stages. They won’t suddenly erupt. Their activity can be categorized from normal (Level 1) to waspada (alert) to siaga (high alert) to awas (danger, Level 4),” BNPB’s Sutopo told the Jakarta Post.

But do these magmatic monsters behave in such a predictable fashion? The Mt Sinabung chapter in Indonesia’s long history of volcanic disasters – like many others – was not foreseen. It began three and a half years ago, early on 29 August, 2010. Several days of rumbling were followed by a minor eruption. Lava flowed from the crater. An ash-cloud above it reached a height of 1.5 km.

The event took local agencies by surprise, for the last eruption here was in 1600. Some solfataric activity appeared near the summit in 1912, but it had been quiet for a century. Hence volcanologists were unfamiliar with its idiosyncrasies, and apparently there was no routine monitoring.

On 31 August 2010, 20% of the 30,000 villagers evacuated earlier were allowed to return home. Three days later, there were two more eruptions. The first, the most intense to date, was at 4.45am on 3 September. It forced another evacuation, this time creating a 3km-high ash-cloud. In the early evening there was a second eruption. Tremors were felt 25km away, prompting the evacuation of another 17,500 people.

On September 7, 2010, Sinabung erupted again. Indonesia’s chief vulcanologist, Surono, described it as “the biggest eruption yet. It was heard eight km away. The ash-plume was 5,000 metres high”.

The current phase of activity began on September 15, 2013, last year at 3am local time. About 3,700 people were evacuated initially from within a three-kilometre radius. Since then, there have been more eruptions. They intensified in late December and early January, prompting evacuation of another 25,000 people.

Mount Merapi -“the one making fire” – is just north of the central Javanese city of Yogyakarta.  One of Indonesia’s most active strato-volcanoes, it has been erupting about every five to ten years.

Another series of violent eruptions began in late October, 2010. Described as the largest since the 1870s, it continued until November 30. Over 350,000 were evacuated from the danger zone. About 350 people perished, mostly in pyroclastic flows of superheated gas. Ash plumes disrupted air travel across the island. On December 3, 2010, Merapi was downgraded from Level 4 (“danger”) to Level 3, and on 3 August 2011 to Level 2 (“alert”). At least 650,000 people, however, remain potentially at risk.

A new database of global volcanic fatalities suggests there have been at least 280,000 deaths in 533 incidents between 1600 and 2010, with most of them caused by a few colossal events.

Indonesia, the Philippines, and the West Indies dominate the spatial distribution of fatalities…. With the largest disasters removed, over 90% of fatalities occurred between 5 km and 30 km from volcanoes, though the most devastating eruptions impacted far beyond these distances.…Single high-fatality incidents are most prevalent in Indonesia.

The authors proposed a new measure “to explore temporal changes in societal vulnerability to volcanic hazards” – the Volcano Fatality Index. They noted, however, that their interpretations were limited by the quality of data, which was affected by “under-recording, uncertainty, and bias.”

According to World Bank and other research, at least 600 million people now live in areas potentially affected by volcanic hazards, due to population growth and development.

Climate is another factor; many fatal incidents have occurred in tropical latitudes, likely for two reasons. Firstly, and most importantly, cooler temperatures at high altitudes on the flanks of volcanoes have led to large populations settling very close to volcanoes compared to areas of more temperate climate.

Did investment in mitigation, civil protection and early warning assessment save lives?  They argued volcanologists had been increasingly successful in reducing disaster risk, especially by timely evacuation from high-hazard zones shortly before major eruptions.

Although some of their conclusions were “very approximate and uncertain”, the Australian government should assess whether more grant funding is justified for this vital work – more for applied geoscience and less for so-called “climate change adaptation (CCA)” (“mitigation” “and “resilience”) programs based on dubious assumptions – as part of its Australian Agency for International Development (AusAID) activities.

AusAID’s current disaster risk reduction policy after all is designed to reduce ‘vulnerability and enhance resilience of countries and communities to disasters’. Fortunately, it is aware already of the “need to build a stronger evidence base for DRR programming across AusAID through better and more consistent reporting on impact.” This may lead to a reassessment of some existing aid flows.

Expenditure on DRR interventions rose from $59 million in 2009-10 to over $102 million in 2010-11, still only 2.4% of total overseas development assistance. Part of it is directed to the Australia-Indonesia Facility for Disaster Reduction. It is already helping Indonesia establish a “real time earthquake impact estimation system” to enable rapid estimates of people potentially affected by an event. Its activities were subject to  independent review in 2012.

In retrospect, given the region’s eruptive history, Mt Sinabung’s location just 40km from the Lake Toba supervolcano in northwest Sumatra should have ensured greater vigilance. You may not read about it in the MSM, but the largest eruption on Earth in the past 25 million years occurred here only 70,000 years ago. Indonesia’s largest lake — 100 kilometres long and 30 kilometres wide — now occupies the caldera.

It was not, as some claim, the 1815 eruption of Mt Tambora (60,000 deaths), Krakatoa in 1883 (36,000 deaths), or even (see sidebar) Mt Schapelli, despite the recent exponential growth in soporific-bogan emissions from its active zone.

Eruptions are classified using a logarithmic eight-stage Volcanic Explosivity Index. Lake Toba is ranked as a Level 8 phenomenon. Ten times bigger than “mega-colossal” (7), it was an “apocalyptic” event – ejecting 2,800 cubic-km of Dense Rock Equivalent (DRE) into the atmosphere and depositing a 15-centimetre ash layer over South Asia. This estimate may be too low, based on deep-sea cores from the South China Sea.

One thing is clear — an eruption of this magnitude would cause another “volcanic winter” -– as happened in 1816, the “year without a summer“, with temperatures plunging by between three and five degrees. Some prophets of doom ominously suggest that Sunda Arc eruptive patterns changed after the Aceh earthquake of December 26, 2004, making the region more likely to experience a cataclysmic event.

All this is going on in Australia’s backyard. So do not be distracted by cries to “think Schapelle, think cheque-book journalism” or “think lifeboat, think burnt hands”, or even to “think climate, think change”.

Instead, think Toba, think apocalypse — and then count your blessings.

UPDATE: The 1,731-metre  Mt Kelud (East Java) erupted 21:50 local time (16:50 GMT)  on February 13, closing the Jogyakarta, Solo and Surabaya airports. About 200,000 residents from 36 villages within a ten- kilometre radius were urged to evacuate. Kelud was on a Level 3 “high alert” before the eruption and had been rumbling for several weeks. Explosions were heard 130 kilometres away. The most recent event was in 1990. In 1919, about 5,000 died during an eruption, many in hot mudflows.

Lava-lovers interested in learning how to live “in harmony with volcano” can join other thrill seekers (and sacrificial lambs) on an expedition in early September this year. Registration here.

Why the IPCC should never be taken seriously

Dredging up another bogus threat