Before celebrating the recent New Zealand High Court decision to reject a Pacific Islander’s appeal for climate-change refugee status, one should read the judgment – and then reflect on a demographic tragedy. For Justice John Priestley’s decision in NZHC case 3125 – Teitiota v Chief Executive of the Ministry of Business Innovation and Employment  – did not include, as some may have been hoping, a ruling on the veracity (or otherwise) of dangerous anthropogenic climate change (DACC) theory.

The judge not only acknowledged that “a long term problem for the Kiribati government is steadily rising ocean levels attributable to climate change” (paragraph 14); but he also did not challenge “the perception that the inhabitants of Kiribati will be obliged to leave their islands because of rising ocean levels and environmental degradation”.

Mr Ioane Teitiota, a 37-year-old father-of-three from Kiribati, made an unsuccessful claim for refugee status last year while living in NZ. He appealed to the NZ Immigration and Protection Tribunal. The Tribunal ruled on 25 June 2013 he was neither a refugee nor a protected person, a decision he then challenged in the High Court.

Kiribati (population 106,000 (2013), 78,000 (1995); area 800 sqkm) has become a poster-child for climate alarmists in recent years; as has Tuvalu, the world’s fourth-smallest country (26 sqkm) with about 11,000 inhabitants. Both Tuvalu and Kiribati (pronounced ‘Kiribas’) are members – together with 36 other countries – of an activist group, the Alliance of Small Island States. Formed over two decades ago, AOSIS’s mission remains to “address global warming”. Representing a surprising 20 per cent of UN members, it submitted the first draft text during the 1994 Kyoto Protocol negotiations.

Kiribati’s “initial communication” to the United Nations Framework Convention on Climate Change (UNFCCC) was in September 1999. It continued to be “extremely worried and also scared by the potential for the sea level to rise as a result of the enhanced greenhouse effect.” In an address at the UN on 28th September this year, His Excellency Vete Palakua Sakaio, Tuvalu’s Deputy Prime Minister, reiterated AOSIS’s cri de coeur  – to an audience of about 15 – that “It is humanity’s security issue……..The world must save Tuvalu – and save the whole planet – from climate change and sea-level rise (13min.)”

But I digress. Justice Priestley also noted the Tribunal’s acceptance of the 2007 National Adaptation Programme of Action filed by Kiribati under the UNFCCC.

Mt Teitiota’s appeal was lost on legal argument around his refugee status; not whether he and his family were, or would be, in danger from alleged DACC-induced catastrophes should they be returned to Kiribati.

According to the judge’s preamble, the UN Refugee Convention (paragraphs 5-7) was negotiated between 1945 and 1950 and eventually adopted by the UN. It initially applied only to pre-1951 refugees, until the 1967 Protocol removed its original “geographic and temporal limitations”. The Teitiota case was an attempt to broaden it again to include a new category – “climate refugees”.

In the High Court’s view, a refugee is a person to whom the Refugee Convention and its Protocol applies (“convention refugee”) and who, under Article 1A(2):

… owing to well-founded fear of being persecuted for reasons of race, religion, nationality, membership of a particular social group or political opinion, is outside the country of his nationality and is unable or, owing to such fear, is unwilling to avail himself of the protection of that country….

Fear of persecution, however, was not the only grounds for a claim, for

“natural disasters such as earthquakes, volcanic eruptions, severe weather events, and tsunamis can turn people into refugees….And arguably, so too might climate change….and the effect of rising sea levels and violent weather over decades on coastal lands and islands” (paragraph 10).

Yet any person who becomes a refugee because of such events “cannot possibly argue, for that reason alone, that he or she is being persecuted for reasons of religion, nationality, political opinion, or membership of a particular social group.”

Mr Teitiota’s lawyer raised six issues which were, according to the judge, “somewhat imprecise” (paragraph 40), including that:

(i) the word “refugee” should include refugees from climate change and its effects;

(ii) just because all on Kiribati suffer similarly from “global warming”, it should not disqualify Mr Teitiota from claiming climate-refugee status;

(iii) as anthropogenic GHGs (mainly carbon dioxide) are (allegedly) “responsible for rising sea levels and changes of weather patterns (inherent in climate change)”, they constitute an indirect – but global – “human agency”; and

(iv) the previous finding that food and water were adequate on Kiribati was a “misdirection”, given the “effects severe overcrowding and future climate change would have on the applicant and his children”.

Judge Priestley, however, described the application as “misguided” and six propositions “untenable” (paragraphs 41, 53). He re-affirmed the Tribunal’s decision at a mid-October hearing in Auckland.

Furthermore, he found the attempt to expand dramatically the scope of the Refugee Convention — and particularly Article 1A(2)  – “impermissible”.

The optimism and novelty of the applicant’s claim does not, in the context of well settled law and the current concerns of the international community, convert the unhappy position of the applicant and other inhabitants of Kiribati into points of law” (paragraphs 63, 64).

Crucially, he rejected the “thin-end of-the-wedge” tactic in play here.  Had Mr Teitiota’s appeal been upheld, then “…at a stroke, millions of people who are facing medium-term economic deprivation, or the immediate consequences of natural disasters or warfare, or indeed presumptive hardships caused by climate change, would be entitled to protection…” (paragraph 51).

The NZ High Court, however, was not the place to alter the Refugee Convention’s scope.  That was “the task, if they so choose, of the legislatures of sovereign states.”

The judge mentioned something else from the Tribunal’s findings, that:

“the limited capacity of South Tarawa to carry its population is being significantly compromised by the effects of population growth, urbanisation, and limited infrastructure development, particularly in relation to sanitation. The negative impacts of these factors on the carrying capacity of the land on Tarawa atoll are being exacerbated by the effects of both sudden-onset environmental events (storms) and slow-onset processes (sea-level-rise)” (paragraph21 (39).

According to one source, “every 13,509.82 seconds a baby is born”. The island group’s biggest challenge, then, is not “dangerous climate change” – anthropogenic or otherwise – but human population growth.

“Climate change is a definite long-term threat to Kiribati, there’s no doubt whatsoever about that” – (though others do doubt it) – claims Simon Donner, a University of British Columbia climate scientist.

But even Donner does not deny the elephant in the room. “Any first-time visitor to Tarawa is not struck by the impacts of sea level rise, but by how crowded it is.”

Current annual population growth rates exceed five percent. The region has one of the world’s highest rates of teen pregnancy. Overcrowding is a major contributor to disease and the high infant mortality rate. Describing the situation as a “menace”, President Anote Tong has called on churches to encourage birth control.

Meanwhile, a Kiribati adaptation expert has warned the island’s water system is in trouble – but not because of global warming.

“Given that the population density of South Tarawa is so high, and polluting activities take place on almost all the land of South Tarawa, the underlying [fresh] water lens is extremely polluted and is not suitable for human consumption, probably even after boiling.”

Two other judges, Michael Finnane and John O’Meally (pictured left and right below), also expressed their concern a month ago – while knee-deep in Kiribati’s pristine waters and causal controversies. But it was in a lower court – that of public opinion. 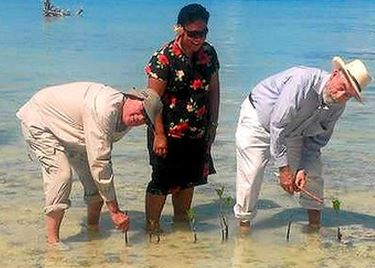 “If [Mr Abbott] saw the things over here that I have seen, I think he would have a different view,” said Judge Finnane (pictured left with fellow jurist John O’Meally).  “If he looked at them and didn’t walk around with shut eyes he would see there is something very significant happening here.”

It was “absurd”, he reportedly added, that people in Sydney drove large four-wheel-drive vehicles or SUVs, unaware of the environmental damage they were doing here.

Judge Finnane had a message from President Tong: “Our survival is on the line. The science says so. It is about moral justice. That has always been the issue facing humanity. What do the people of Australia think about that? We are on the front line.”

There are, however, other perspectives. As Sherlock Holmes once said:  “There is nothing more deceptive than an obvious fact.”

He also said: “It is a capital mistake to theorize before one has data. Insensibly one begins to twist facts to suit theories, instead of theories to suit facts.” But that is another story.