As the nation slept on Sunday morning, confident of an Ashes win, players in another game on the opposite side of the world were wide awake and trying frantically to snatch victory from the ashes of defeat.

Packed into Warsaw’s national sports stadium were 6,120 registered delegates, 1,001 media representatives and 4,719 “observers” -– UN officials, campaigners and members of other non-governmental groups. Fortunately for them, the creeping threat of a COP-out was “saved” during extra-time by an “hour-long emergency huddle” — and one little word. Delegates were so determined, as someone once said at Casablanca airport, to “always have Paris” that yet another Conference of the Parties (COP21) has been scheduled to begin on November 30, 2015, on the Ile-de-France. The huddle got them over the line.

There was a huge sense of relief. It was, said EU Climate Commissioner Connie Hedegaard, “time for all to go home and do the homework: prepare contributions in time to see if the combined effort is enough.”

“I’m sure there are more comfortable ways to Paris,” she added, “but now we can move forward.” 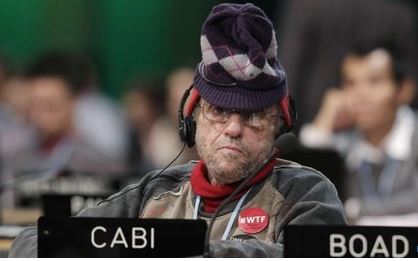 But do the problems of 6,120 COP delegates “amount to a hill of beans” in this crazy climate-obsessed world? Perhaps one day they will be able to answer that question, but only after Paris. Finding out precisely what happened in the dying hours of COP19 was no easy task.

“Decisions: There are currently no decisions for this COP19 session, they will be uploaded shortly. In some cases, no decisions are available.”

The ABC’s Radio National must have had the same problem. Despite all its resources, it was forced to rely (again) on the CEO of an activist lobby group, John Connor of The Climate Institute, for his take on COP19 and a new notion – “climate credibility.” Australia, according to the Institute, “faces key tests of its climate resolve from early 2014, which should drive a re-think of its approach to global climate engagement and action.”

Connor told Sunday morning listeners that the new government’s recent actions had “pushed Australia to or beyond the margins of climate credibility and global citizenship.”

Furthermore, it apparently “made inflammatory remarks about core international climate-financing principles and institutions” and took “difficult, if not obstructive, positions in the negotiations.” [In Institute-speak, “difficult positions” presumably means those that do not support with its decarbonising agenda.]

There was another exercise in silly-semantics as hours ticked by — what Bob Carr might call a search for “different verbal formulations” — sufficiently imprecise to satisfy everyone and allow all to depart without too much egg-on-face.

COP19’s climactic moment appears to have been a 2b-or-not-2b struggle around a single word in UNFCCC’s so-called “pathway document”. Paragraph 2b of the draft text originally referred to “commitments” by all parties. But in a plenary session, delegates from China and India said they could not accept this language.

With time running out, however, desperate delegates formed the infallible UNFCCC decision-scrum. They huddled in a corner of the stadium to work out a compromise, presumably while someone embargoed their passports to prevent early departures.

After only an hour, it was agreed to replace “commitments” for nationally-determined GHG emissions cuts with “contributions”. And off they went home. “The wording was vague enough to make rich countries feel comfortable that they weren’t going to be held liable for climate catastrophes in the developing world,” said one observer.

The “more flexible” word also allows the US and EU to claim everyone is on the same page, while China and India can still insist that they are doing something different from the richer countries.

Tempers began to flare late last Friday. Venezuela’s head of delegation — representing a group of “like-minded countries” including China, India, Saudi Arabia and Malaysia — accused the EU of “damaging seriously” another atmosphere, that of “confidence and trust in this process”.

“We are shocked by the brazen attack against our group by Hedegaard”, said Claudia Salerno. “It is incredible that she has chosen to accuse our group of blocking progress.”

COP19 negotiations were meant to lay the groundwork for the crucial Paris COP21, when governments are supposed to sign a new global treaty on climate change to come into force from 2020. Countries are required to specify national emissions targets for reduced emissions. UNFCCC, by some kind of bureaucratic alchemy, will determine whether collectively they are “sufficiently ambitious” to prevent what it describes as “dangerous levels of climate change”.

Then there was that controversial old-favourite – the “firewall” issue.

Under Article 3.1 of UNFCCC Principles, member countries agreed to “protect the climate system for the benefit of present and future generations of humankind, on the basis of equity and in accordance with their common but differentiated responsibilities and respective capabilities.” The developed world still wants to eliminate the so-called “firewall” between “differentiated responsibilities” in any 2015 climate deal. Fat chance.

Some media reports said China and India apparently dropped their demands for a reference to Article 3.1. Indian Environment Minister Jayanthi Natarajan, however, stressed “the firewall exists and it will continue to exist.” The issue is either far from resolved, or someone forgot to count the votes of Pernod Ricard Polska.

According to Benny Peiser of the Global Warming Policy Foundation,

“The last minute compromise amendment introduced by the Indian delegation confirms the firewall between rich and poor countries; that is, the agreed Durban Platform for Enhanced Action (ADP) will remain in place. Moreover, the agreed national ‘contributions’ (whatever that means) are undefined, voluntary and not legally binding. In short, the can has been kicked into the long grass again while the chances for a legally binding agreement remain close to zero.”

The U.S. and other rich countries also resisted demands to put down firm commitments on how they plan to fulfil a pledge to scale up climate financing to developing countries to $100 billion by 2020. “Unfortunately, they failed to agree on what process and criteria they would use to evaluate the adequacy and fairness of each other’s proposed actions,” said Alden Meyer of the Union of Concerned Scientists. “As the Rolling Stones said, ‘you don’t always get what you want, but sometimes you get what you need if you try hard enough.”

A closing three-page media release eventually emerged from the bowels of the stadium. It proclaimed triumphantly that governments were on track to reach a 2015 “universal” climate agreement, which would appear “on the table at the next UN Climate change conference in Peru [COP20].”

“A groundswell of action is happening at all levels of society,” confided UNFCCC Executive Secretary Christiana Figueres.

Despite contrary public statements from several countries, including Australia, UN Framework Convention on Climate Change (UNFCCC) still clings to its climate fantasy – now rebranded as the “Warsaw International Mechanism for Loss and Damage”– on which work, we are assured,  “will begin next year”.

“The conference also decided to establish an international mechanism to provide most vulnerable populations with better protection against loss and damage caused by extreme weather events and slow onset events such as rising sea levels.”

Yet after more than 30 hours of negotiations, and despite some MSM headlines, many key issues remain unresolved: including the precise level of cuts between developed and developing worlds, and the source of $100bn a year by 2020 promised to developing countries to fund moves to a greener economy and compensate them for EWEs, and so on.

As legendary US baseball player and coach Yogi Berra, once said: “It’s déjà vu all over again.” But there were no home-runs in Warsaw.