By George, Milne just doesn’t get it 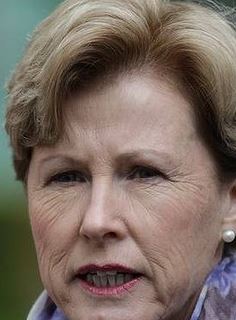 When Christine Milne quotes George Orwell, be afraid; be very afraid. It confirms that Starship Climatica Criminalis has entered The Twilight Zone and is now heading for The Outer Limits of the Greeny Way galaxy – and oblivion.

The Twilight Zone is a fifth dimension beyond that which is known to man. It is a dimension as vast as our ignorance and as timeless as infinity. It is somewhere between light and shadow, between science and superstition, between seriousness and silliness – and between the pit of man’s fears and what lies between his ears.

There was a hush across the nation. Emergency hospitalisation rates surged, as perplexed listeners – surprised at so early an hour by such an insight from so unlikely a source – choked on their Corn Flakes and Coco Pops.

Orwell and Milne are hardly peas in a green pod. He wanted language to be “an instrument for expressing – not for concealing or preventing – thought”. It had to be freed from the “worst follies of orthodoxy” and totalitarian distortion. As for the politics of his time, it attempted to “make lies sound truthful”. Indeed, it was “a mass of lies, evasions, folly, hatred, and schizophrenia”.

How today’s intelligentsia deals with ideological enemies would be all too familiar to him: its attempts to intimidate them into silence – not with guns or truncheons – but with punitive psychology and pseudoscience, to criminalise dissent, and to debase debate with drivel about denialism.

Milne’s October 23 media release (below) is merely the latest example of what is now oozing out of the warmists’ alarmist chain, which extends right up to Big Brother: the UN agencies that spawned the climate-scare, plus the banks and countries that stand to profit from it.

This morning on 3AW, Prime Minister Tony Abbott said UN climate chief Christiana Figueres was “talking through her hat” when discussing the link between worsening bushfires and global warming.

“Tony Abbott has insulted UN climate chief Christiana Figueres but the real losers out of his science denialism are the future victims of extreme bushfires, droughts and storms in Australia,” Australian Greens Leader Christine Milne said.

“Tony Abbott is the Prime Minister for Science Denialism. He thinks his opinion on global warming outranks the evidence of the best scientists in the world. It is arrogance in the extreme.

“The Prime Minister’s hubris on global warming will see Australia swelter and burn, and our people suffer.”

Orwell would be intrigued to discover “climate change” no longer refers merely to a natural event – an unpredictable phenomenon that has been around ever since planet Earth acquired an atmosphere – but has become a pejorative term; a favourite with mischief makers, carbon catastrophists, talk-show hosts, current affairs anchors, activists, anarchists and assorted proselytisers.

His advice probably would be much the same as in 1946, when he observed in Politics and English Language:

An “invasion of one’s mind by ready-made expressions (lay the foundations, achieve a radical transformation) – [climate consensus, climate criminal, climate denier, global warming, extreme weather event, etc] – can be prevented only if one is constantly on guard against them, for every such phrase anaesthetizes a portion of one’s brain.”

As for Milne’s eco-rhetoric, the writer who gave us Newspeak would have classified it as propaganda from at least one parsec away.

It was expected that Newspeak would finally supersede Oldspeak (standard English) by about the year 2050….Its purpose was not only to provide a medium of expression for the world-view and mental habits proper to the devotees of IngSoc [Eco-Soc], but to make all other modes of thought impossible. It was intended that when Newspeak had been adopted once and for all and Oldspeak forgotten, a heretical thought — that is, a thought diverging from the principles of IngSoc [Eco-Soc] — should be literally unthinkable, at least so far as thought is dependent on words. (George Orwell, 1948, from his appendix to 1984)

The word “free”, for example, still existed in Newspeak. But as there was no political and intellectual freedom in Orwell’s Oceania, it was impossible to use it in expressions like “politically free” or “intellectually free”.  But one could still say: “My dog is free from lice”; or “The state will not provide a free lunch to any person or agency whose carbon footprint exceeds statutory limits.”

In Milne’s Greenland, calling asylum-seekers “illegals” apparently dehumanises them; yet paradoxically, one’s political opponents can be described publicly as climate criminals and worse.

But does her twittering constitute the country’s first case of Orwellian Inversion Syndrome (OIS)? We know from DSM-5 that OIS is a rare disorder – typically presenting as a manic mix of sci-fi horror and hilarity – not unlike compere and producer Rod Serling’s 1960s TV series.

If so, were Milne’s hyperbole and hysteria triggered by too many viewings of “Nightmare at 20,000 feet” as a child? Did the monstrous figure a passenger imagines is destroying his plane’s wing mid-flight morph into a metaphor for humankind’s impact on the planet’s habitability?

Whatever the case, the jury is still out on why almost one-tenth of the nation’s population continues to believe draconian Green policies will turn Milne’s Goldilocks “just right” fantasy — “a safe global climate not plagued by worse and worse extreme weather” – into a reality, one just right for everyone from Kaiser Wilhelm II Land to Novaya Zemlya.

Her cherry-picked expression – “where language can corrupt thought” – appears in Orwell’s post-war essay, Politics and the English Language.

In the previous paragraph, he warned that insincerity was the great enemy of clear language.  “When the general atmosphere is bad” – as in a dictatorship or left-leaning marriage of convenience – “language must suffer”.

“But if thought corrupts language, language can also corrupt thought. A bad usage can spread by tradition and imitation even among people who should and do know better. The debased language that I have been discussing is in some ways very convenient.”

Certain phrases were seductive, and their use a “continuous temptation — like a packet of aspirins always at one’s elbow”.

Today’s semantic sleuths also want to know when and why certain expressions enter the language. Obsessed souls, they sift through the daily cyber-bile, ideological rubbish and detritus of dead events, in search of genealogy and provenance — and a free lunch.

When Melbourne-based Greens Deputy Leader, Adam Bandt, described the Prime Minister as a “climate-change criminal” last week, the sleuths were off with the hounds.

Attacking the new government’s draft legislation to repeal Labor’s carbon-pricing scheme from mid-2014, an angry Bandt told the media Abbott was a CCC.

His party would “stand steadfast to protect the Australian people from the climate-change criminality [CCC] of Tony Abbott.”

Bandt’s climate-criminal meme has a long and intriguing history. A month earlier, on the September 19, Milne released this statement: Abbott’s crimes against the climate. The government’s plan to dismantle Labor’s Climate Change Authority – and remove its “independent” board — was described as a “cowardly attack on current and future generations.”

“Tony Abbott is a climate criminal,” said Milne. “In the context of global warming, this action is a crime against humanity.” Future generations would “look back on this day and remember it as the day Tony Abbott condemned them and their peers to climate chaos.” The Greens, however, will remember it for another reason – losing the balance of power in the Senate.

Perhaps Milne was inspired to go in hard by James Hansen’s “crimes against humanity” speech at the UN University in early 2012?  Or was it Gaius Publius and his Climate Criminals Project, “a five-pronged approach to climate solution”, posted online a year ago?

“For a moment Winston ignored the dial. He made a violent effort to raise himself into a sitting position, and merely succeeded in wrenching his body painfully.

‘But how can you control matter?’ he burst out. ‘You don’t even control the climate or the law of gravity. And then there are disease, pain, death – .”

O’Brien silenced him by a movement of his hand. ‘We control matter because we control the mind. Reality is inside the skull.”

As Milne and others demonstrate, reality is indeed between our ears. It is not only in Orwell’s dystopia that claims are made about climate control — and how to persuade the gullible to embrace such folly.

“Power is in tearing human minds to pieces and putting them together again in new shapes of your own choosing. Do you begin to see, then, what kind of world we are creating?”

If Orwell was writing today, would he add a paragraph like this one?

Of climate science and stomach bugs