Climate science in a Styrofoam cup

In this post-modern world of “science”, if you assert something loudly enough, often enough and with enough passion, you will gain a flock of supporters (akaconsensus), your assertion will become fact, and all your dreams comes true. The IPCC’s wish is that carbon dioxide is driving the planet’s climate, and no amount of historic temperature adjustment or uncooperative temperature trends is going to obscure its collective vision of the way things ought to be working.

The IPCC has one fundamental problem.

While at university, I had the thrilling experience of handling liquid nitrogen. There I was holding in my bare hands, a polystyrene cup filled with liquid nitrogen (quite rightly, not something that would be allowed these days). Despite being at −195.8°C, and only a few millimetres of polystyrene away from my 36°C fingers, I could feel barely a chill. A cold stubby of beer would have me swapping hands in minutes, but something nearly 200 degrees colder needed only millimetres of polystyrene to stop the rapid transfer of heat that is driven by large temperature differences. The cup was so effective, it would have made little difference if I had added another cup to double the thickness.

Global warming advocates usually forget that the Earth’s relationship with space is similar. Space is on average -270°C while the Earth is somewhere between 10 and 20°C. Just a thin layer of greenhouse gasses in our atmosphere prevents the catastrophic loss of heat that would otherwise radiate out at night. Radiation from the sun, at some 5500°C, replaces the heat lost over night, and the whole system is in near balance. But CO2 absorbs only in a small proportion of the wavelengths at which this heat is trying to escape.

Only the green peak (CO2 absorption spectrum) on the right above actually does any work, and much of that overlaps with water vapour (blue line). Furthermore, most of its work is done when the concentration of CO2 is only 10% of what it is today. Thanks to Jo Nova for the chart. 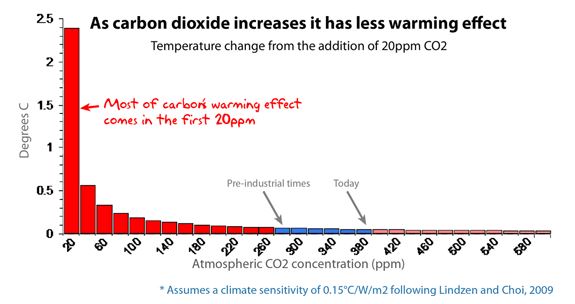 Water vapour is a far more powerful greenhouse gas. Even more importantly, it is extremely, nay colossally, difficult to model. The problem is the common misunderstanding of what water vapour is. If you can see it, it aint water vapour.

Steam and clouds are made up of tiny water droplets, formed when saturated water vapour condenses from gas to liquid form. Saturated water vapour is a powerful greenhouse gas, while clouds are an effective sun reflector that help to cool the Earth. Water vapour in the atmosphere is created mainly by evaporation of oceans, and is depleted by rainfall. Water vapour condenses into clouds when it experiences temperature drops or pressure increases (e.g. as it passes over mountains) or high concentrations of fine dust particles. It is so hard to model that the best weather forecasters in the world can’t reliably tell you “if you need an umbrella next Tuesday”. Yet the IPCC has the audacity to claim that it has 97% consensus of 95% confidence that we are causing more than 50% of dangerously climate warming, via CO2. Wishful thinking.

Of course the situation is much more complicated than this, as increased temperatures mean that the atmosphere can carry more water vapour, which can cause more greenhouse heat trapping. But water vapour content of the atmosphere is highly variable, and is driven by, among other things, cloudiness and solar intensity.

In fact, the IPCC has numerous fundamental problems.

The sun is about 4.5 billion years old and while we have been observing it for thousands of years, we have only in the last few years had the tools available to study it seriously. Now that we have the tools, every few months a new discovery is made and our superficial understanding of the sun takes one baby-step towards maturity. The IPCC may wish upon a star that our nearby star does not contribute significantly to our climate, but that is so fanciful that even Disney would not buy it.

Mal Wedd is a physicist who wishes upon a star that the IPCC’s latest report was full of science and devoid of post-modern assertion. Sigh.