A modest proposal to improve Tasmania

Tasmania is an archipelago of more than 300 islands that have suffered greatly from the impact of white settlement. Only Redondo Island in Bass Strait can be regarded as pristine. Politically, Macquarie Island is also part of Tasmania. Over the past decade Macquarie Island has been rehabilitated to its pre-settlement condition by federal and state programs. I propose that a similar process now be applied to the island of Tasmania.

The Problem: Tasmania has an area of 62,409 km2 and a population of around half a million. Fortunately, more than half of its land mass has been conserved as World Heritage areas, national parks and forestry reserves and is unpopulated. The other half of the island has been badly degraded by forestry, farming, mining, light industry and residential subdivisions. It is time to reverse this process.

One mine alone, Copper Mines of Tasmania, mines 2 million tonnes of ore to produce 24,000 tonnes of copper concentrate per year. Other West Coat mines are similarly destructive. Obviously this rate of mining is unsustainable and cannot be allowed to continue. Much of the Eastern half of the state is given over to farming and market gardening. These activities preclude the grazing of native animals which have been relegated to marginal areas of scrub and forest with lower fertility. Thus kangaroos, wallabies, potoroos, bettongs, possums and quolls have been severely limited in their range by human activity. Similarly sheep farmers in the Midlands routinely exclude kangaroos from their pasture.

Fortunately the forestry industry has now been dismantled.

The Solution: This proposal concerns the restoration of the island to its pre-settlement condition by scaling back these destructive human activities. It is envisaged that this process will take the best part of a decade to complete. During that time invasive and non-sustainable industries will be closed down and the communities they support resettled. All introduced species of fauna and flora will be systematically exterminated by a variety of sub-programs involving hunting and mass poisoning.

The recent successful extermination of vermin on Macquarie Island sets the pattern here. First, the top predators, such as feral cats, will be eradicated, inevitably leading to an explosion of prey populations.

We can expect herbivores, such as rabbits, to wreak an enormous amount of highly visible damage to flora as their numbers increase. Farmers and market gardeners will bear the brunt of this, which will provide extra encouragement to close down their operations and move off the land. As the Macquarie Island experience demonstrated, images of devastated flora are potent and persuasive tools in gaining public support for ongoing funding.

Resettlement: It is envisaged most of the people now living on the island will be resettled on the mainland of Australia or elsewhere. This should present little difficulty. Australia’s present intake of overseas immigrants is around 200,000 per year. This could be halved and 100,000 Tasmanians per annum resettled in place of overseas immigrants. The operation would be completed in five years.

The only exception to the resettlement program would be Aboriginal Tasmanians and those Commonwealth public servants and contractors who will be needed to supervise the ongoing program. Of 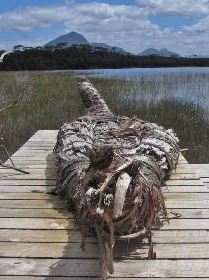 course, Aboriginal Tasmanians will be discouraged from persisting in activities they have adopted since white settlement and encouraged instead to return to their Mesolithic lifestyle. This process has already commenced. Bark shelters and canoes (of the type shown at left) have already been constructed at Melaleuca Inlet, near where Deny King once operated his tin mine. Once  the King lease expires, all trace of his activities will be eliminated and the area restored to its Mesolithic splendour.

Funding: A rough guide to costing can be found from the Macquarie Island program, which cost $26 million. The area of Macquarie Island is 127.8 km2. The ratio of areas is 488:1. Hence, we can estimate the cost of the program as 488 X $26 million, i.e. $12.7 billion over a five year period (much less than the NBN). This figure is generous given that half the island is already protected.

Conclusion: This program would make us a world leader among environmentally responsible nations. Once implemented, we would request World Heritage status for the entire island of Tasmania, given that we would be the first country in the world to rehabilitate the ecology of a whole state. The kudos would be immeasurable. The world’s big polluters — China, India and Brazil — would have to sit up and take notice when we cut our carbon emissions. They would have to follow our example.

Rather than the economic basket case it is today, a de-populated Tasmania would become a force for good.

(Editor’s note: In a previous article, John Reid was a good deal less sure of the Macquarie Island rehabilitation program’s success.)

John Reid is a physicist who lives in Cygnet, Tasmania. His interests include alternative energy and the environment.