The WA forum had something for everyone, especially sufferers from mid-winter climate anxiety syndrome and folk fearful of Abbottgeddon.

For the University of Western Australia’s new Vice-Chancellor, Professor Paul Johnson, the 14th June event on “Understanding Climate Science and the Carbon Price” was an opportunity to promote the university’s Achieve International Excellence brand. An expert on UK economic and social development since 1850 and population ageing, he was very keen on doing something about global warming and climate change. The university was tackling these “issues of global concern from all angles”. He warned of “the risks of not responding effectively” to them. 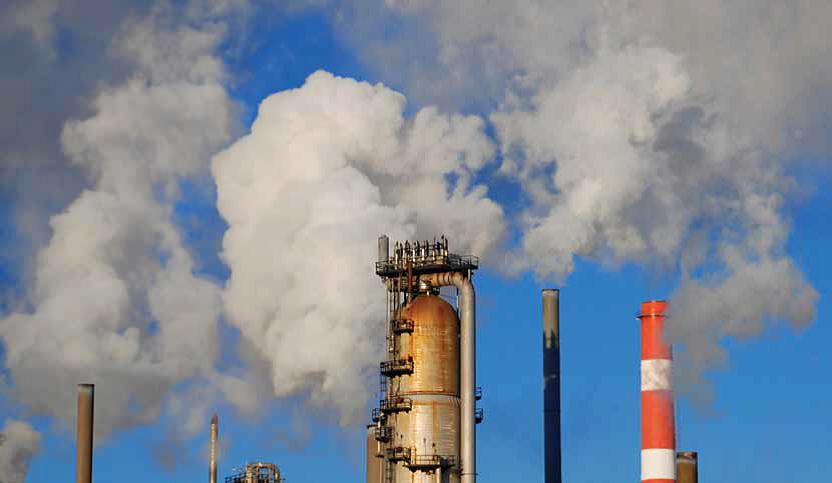 This colour photograph on the forum brochure shows grey-white vapour emanating from smokestacks at an unidentified industrial site. Condensing steam, however, is not carbon dioxide, nor is soot (carbon). Carbon dioxide is a colourless and odourless trace gas. Red herrings –be they “carbon” images or rhetoric – do not make gaseous plant food a pollutant, except in Warmerland and Orwell’s Oceania.

Activist science is on the rise. According to a recent blogger on The Conversation,

the traditional notion of data speaking for itself has long gone. Scientists need to politicise – and quickly. No more hoping that the facts will persuade, that rationality will triumph because…well, it just will. That sort of thinking derives from faith. Faith is inadequate to the task of toppling pharaohs. It is not a matter of whose side are you on so much as will you, as scientists, bring science once again into the service of humanity?

The problem with politicised (“post-normal”) science is human nature. Is interpreting data, collecting so-called “facts” and constructing “projections” about a complex and controversial subject – such as the planet’s climate – a wholly objective enterprise, one immune from intellectual fashion, prejudice, funding politics, and eco-passion about “saving humanity”? Does peer-review ensure research is free from noble cause corruption, empire building, confirmation bias, group-think and so on?

For Professor Malcolm McCulloch, Fellow of the Royal Society (2010), a WA Premier’s Fellow (2009), renowned isotope geochemist, coral specialist, palaeoseawater pH calibrator, research leader at UWA’s Oceans Institute and recipient of grants worth several million dollars, the forum was an opportunity to warm up the audience with 15 minutes on the greatest threat to civilisation – anthropogenic greenhouse gas emissions (AGHG) (aka “carbon pollution”); and to set the scene for the night’s other big gig with some alarming “hockey stick” slides.

Atmospheric carbon dioxide has been not only increasing, but its rate of increase is also increasing and expected to reach an annual two parts per million soon. A level of 1,000 ppm apparently would increase the temperature by six or seven degrees Centigrade by 2100. The irreversible effects – ocean acidification, reduced coral calcification and a sea level rise of 0.40 to 0.60 metres by 2100. “If we melt the ice sheets,” he predicted, “the rise could be ten times this figure – four to six metres in the next few thousand years.”

According to McCulloch, Antarctic warming was causing a rise in ocean-hosted carbon dioxide, which then produces changes in the northern hemisphere’s climate. There was nothing, however, on recent controversies in the climate space; or the uncertainties that continue to challenge climate researchers.

‘In climate research and modelling, we should recognize that we are dealing with a coupled non-linear chaotic system, and therefore that long-term prediction of future climate states is not possible.’ UN IPCC 3rd Assessment Report, 2001, (Section 14.2.2.2, p. 774)

For Greg Combet, Federal Minister for Climate Change and Energy Efficiency and a past ACTU leader (1999-2007), it was an opportunity to defend his “carbon price mechanism” for 30 minutes and give regional “clean energy” decarbonising initiatives some positive spin.

Combet, who represented Australia at recent international climate forums, stressed that “not one country questioned the science”. In Durban last year it was agreed that a “new treaty with binding obligations” would be negotiated by 2020. Something had to done now to ensure we could honour (pay for) our UN wealth-transfer pledges. We had to do our fair share to save the world from a French-fry fate. “If you respect the science,” he said, “you have to accept the public policy responsibility.”

Yet if you simply accept official UN reports on climate change, ignore Climategate leaks and the politicised group-think culture; if you do not critique IPCC-sponsored and other research; if you treat highly speculative projections as accurate forecasts, then you – like Combet, Garnaut, Flannery, etc, – will insist reducing human carbon dioxide emissions is the only practical way to reduce global temperatures and prevent climate chaos.

Why, then, is the government reluctant to give an international context for its introduction of “permission-to-pollute” carbon dioxide permits?

As Paul Kelly noted in The Weekend Australian (16-17 June),

a bizarre fate has befallen the carbon tax. It is de-coupled from its purpose. Debate about emissions reduction targets and saving the planet has slipped from the radar…. Three years ago climate change would have been the main issue. Now it is about a tax-cash payment policy with Climate Change Minister Greg Combet boasting nine out of 10 households will be better off.

[It] has turned into a net tax-transfer bonus that is justified in its own right.

Here’s one explanation. Commonwealth Treasury modelling assumes availability of unlimited international emissions permits from 2015-16. Given there is currently no global permit market, this is very optimistic. Yet virtually all the modelled national “reduction” in emissions is projected to come merely from purchasing offshore permits, some inevitably from carbon cowboys and carpetbaggers. Domestic emissions actually are expected to increase by 2020, declining by only 2 per cent by 2050. Significant amounts of income (estimated at $57 billion in 2050) will be transferred to developing countries. If international permits are unavailable, the domestic cost of emissions abatement could be much higher. Who would want to focus attention on this looming – and environmentally ineffective – mess?

When asked why the government has resisted joining up all the carbon (dioxide) dots, Combet blamed the “hostile political environment”. The AbbottAbbottAbbott monster had

engendered fear in the community with his overblown beat-up. It’s a bunch of garbage. But he’s going to be found out. Four million households will be better off under the carbon price. I’m a Labor man. I’m a veteran of many union meetings. I know you just can’t get up and lie to people.

“We have a responsibility to future generations”, he said. “Is $2.50 extra a week too much for you? Are you really that selfish? It is just doing the right thing.” This went down well. The audience applauded with such vigour it was as if they were about to be compensated with a bunch of free carbon credits, despite having the world’s largest per capita carbon footprint.

Ultimately, however, the debate will not be about domestic price impacts or whether “the sky will fall in after 1 July 2012” when the carbon price madness begins; but for how much longer the government’s carbon charade and complicity with an eco-elite presiding over the rotten core of international climate politics can be kept from public knowledge and scrutiny.

Disclosure Statement: Michael Kile does not work for, consult to, own shares in or receive funding from any company or organisation that would benefit from this article, and has no relevant affiliations except as a director of the Climate Refugee Benevolent Fund and its subsidiaries.