Matt and Janet Thompson and their family, ordinary Australians, ordinary Quadrant Online readers, are part of the “Convoy of No Confidence”. They are travelling all the way from Perth to Canberra. This is the start of their story.

The Perth leg of the “Convoy of No Confidence” got off to a good start Thursday morning 18 October 2011 at 7:00am. The group began its 3,850 km trek to Parliament House Canberra from the car park of Belmont Racecourse on the Swan River.

With the winter sun rising in a clear sky, and with the Perth City skyline as backdrop, Convoy leader, truck owner-operator Gordon Crawford, drove his “billboard on wheels” through an orange ribbon, held on one end by Pastoralist David Steadman and on the other by President of the Sydney Mining Club Julian Malnic.

Orange denotes Convoy 6 in the convoy organisers’ colour coded system of tracking the routes. The ribbon ceremony was symbolic of the solidarity of both agriculture and mining in support of the “Election Now” goal of the Convoy Protests. 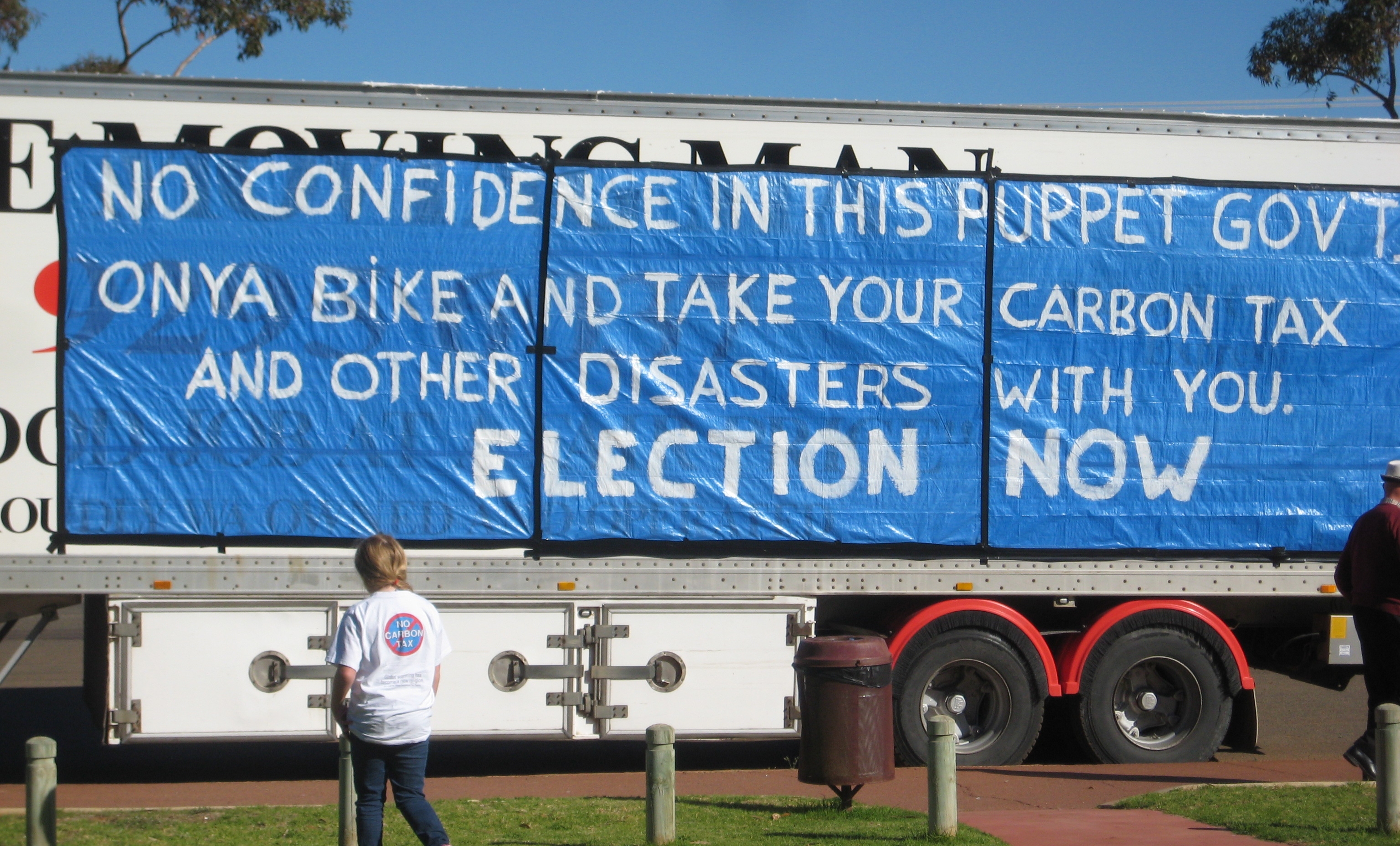 About thirty vehicles participated in the send-off, displaying Aussie flags, signage and orange decorations as they escorted the convoy out of Perth. Amongst the participants were noted scientist Dr. David Evans and renowned science blogger Jo Nova. 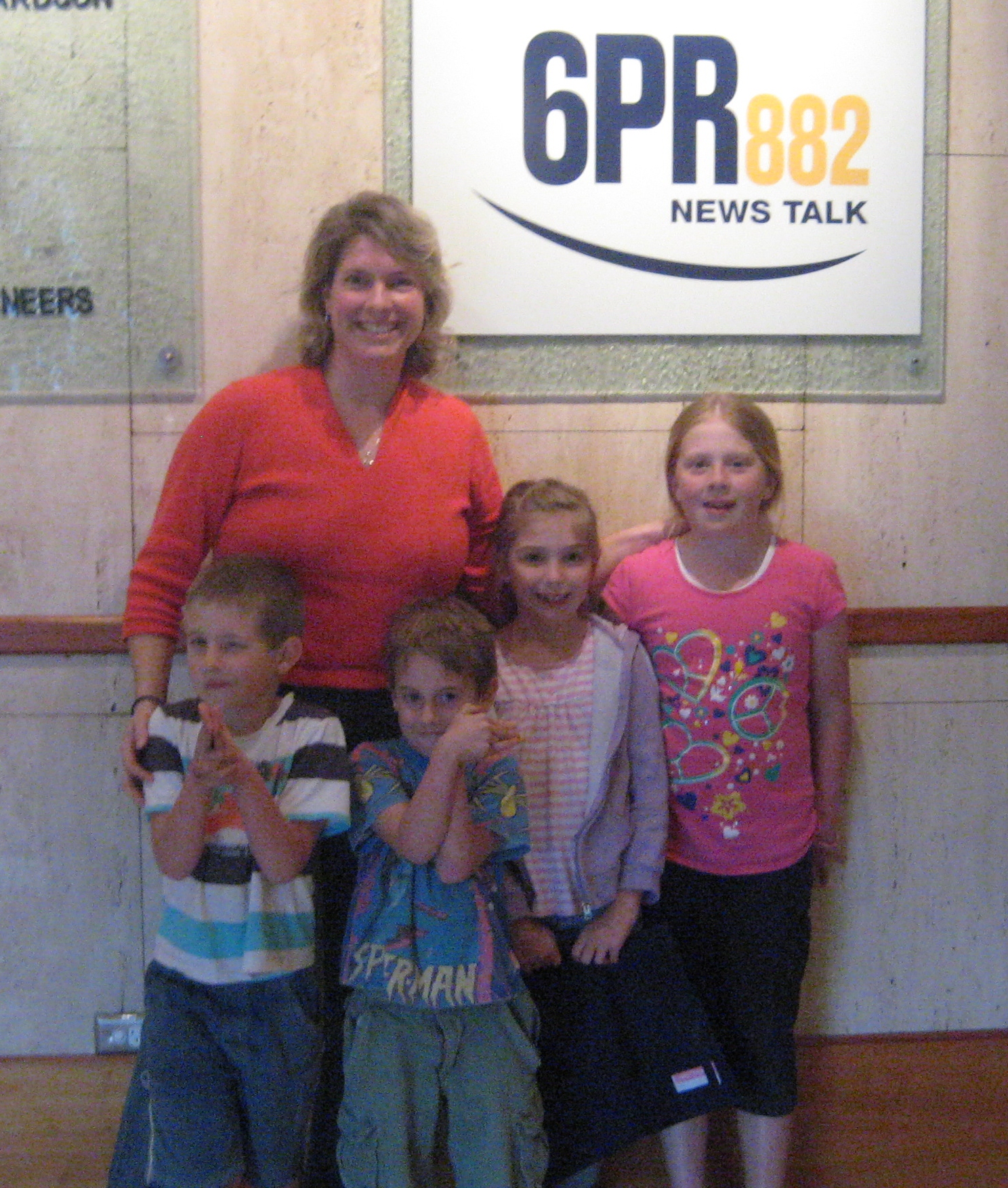 Convoy participants were greeted along the route by local people parked alongside the road, waving and honking. Fourteen core convoyers (those driving all the way from Perth to Canberra) welcomed new participants while waving goodbye to others.

Several people took the time to escort the convoy for one or two hundred kilometres to show support and engage in a bit of two-way radio banter. At all stops we were handed signed petitions and unopened packets of the Government’s glossy “Clean Energy Future” propaganda to personally “return to sender.”

The convoy paraded through Kalgoorlie’s historic Hannan Street to cheering onlookers and the sound of horns blaring. The convoy halted for the night in Norseman, WA, with the truckies in the group champing at the bit to roll on.

Friday, we will be off at 5:00 am for the long trek across the iconic Nullarbor Plain, ending 1,128 kilometres later in Penong, South Australia.

It’s been said that if one wishes to know what is going on within a company – or an entire country – they should have a yarn with a truckie. 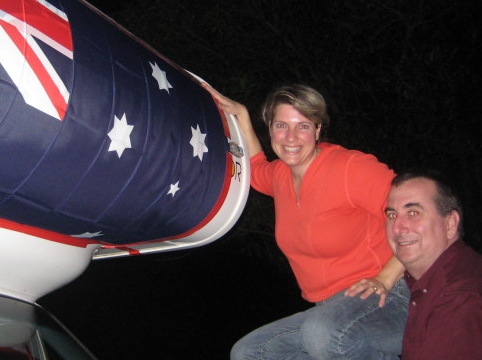 Truckies are the first to know the real scoop on what is happening in an economy; they are often very switched-on people.

I enjoyed the chatter on the two-way along the highway as drivers discussed the complete dissatisfaction with the ruling class at the moment. Truckies headed in an opposite direction often chimed in and expressed support for the convoy. The general feeling was that productive people that make the country work are constantly being attacked and looted by the political and bureaucratic classes.

For me, an eight-word sign I saw painted on some orange balloons today seemed to sum it up: No farmers, no food; more government, more waste.