On Friday (August 12), The Australian reported two new papers in the journal Nature explaining the marked slowing of the annual increases of methane in the atmosphere. The behaviour is shown in the figure, from The Australian, published below.

The scientific papers’ conclusions seemed to be heading in opposite directions, with one suggesting reduced methane emissions from fossil fuel production and the other from reduced natural influences, in particular rice paddy fields. 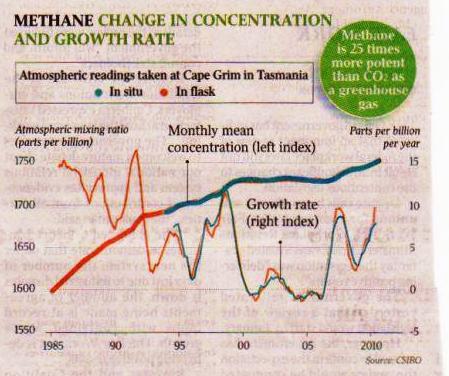 There is a serious question about the role of methane as a greenhouse gas. If atmospheric methane is not increasing or simply varying due to natural causes then there is little we can do about it. Yet the carbon tax legislation will include fugitive emissions (of methane) from coal mines and transmission gas pipelines. This will impact on the extraction of coal seam gas as well.

But that is not all, the IPCC scenarios assume rising methane concentrations in the atmosphere. These scenarios provide the greenhouse gas concentrations that are used to model future temperatures and as a result sea level rises. The CSIRO modelling of sea level rises uses the most aggressive of these, A1FI where FI stands for Fuel Intensive and assumes the highest use of fossil fuels.

Yet there is no doubt that the rise in methane has slowed, as can be seen in the figure in The Australian article.

What was not pointed out in The Australian was that the annual changes, also shown, have a very variable profile. In fact all but one of the peaks correspond to El Ninos. The peak in 1991 is the exception as it is the result of the eruption of Mt. Pinatubo where large amounts of sulphur dioxide blocked the sink that removed methane from the atmosphere. These are naturally occurring events.

The explanation provided by the CSIRO was:

It has been a long-held view that the rate of growth of methane peaked in the 1960s and has since declined. … The rise coincided with the massive release of methane in the 1960s from the great acceleration in the search for oil at a time when methane was seen as a waste product and flared into the atmosphere.

Over the last two decades, fuel companies recognised its value and developed the technology to capture it and sell it as natural gas.

The most polite comment one might make is that this explanation does not stand up to examination.

Exploration wells, whether dry or successful are capped until development. The standard procedure with production wells, if they are in oil reservoirs, is to flare the gas. The burned gas turns into carbon dioxide and does not remain as methane. The only country that did not always follow this procedure was the old Soviet Union where gas might or might not be flared.

Contrary to the CSIRO assertion, the importance of natural gas was recognized in the 1930s as a substitute for “town gas”. Natural gas has been used domestically in the United States since the 1930s. The Soviet Union was by the 1960s the second largest consumer of natural gas. Oil companies were developing major gas fields in the North Sea in the 1970s to supply European countries. The technology had all been developed in the 1950s and 1960s not in the last twenty years.

There is another explanation for the behaviour of methane which is the leakage of natural gas from transmission pipelines. The consumption of natural gas rose by a factor of ten from 1950 to 2010. It requires only a five percent loss to explain the growth of atmospheric methane. The problems of the gas pipelines are well documented with the main culprit being the old Soviet Union and the Trans-Siberian pipeline. In fact troubles on the Trans-Siberian pipeline led to a massive explosion in June 1982 estimated at 3,000 tonnes equivalent TNT. It was the largest non-nuclear explosion and fire ever seen from space. The maintenance and control of the pipelines was greatly improved in the late 1980s and losses reduced by 1995 as gas was piped to Western European consumers. Further the peak in atmospheric methane occurred in the 1970s before the natural gas leakage was addressed.

Since the mid 1990s variations in methane can be explained by natural variations in the sources and sinks for methane. The El Ninos give rise to more methane from the swamps and marshes of the Tropics while at the same time through decreasing humidity remove less methane. Humidity provides one of the inputs for the chemical reaction that removes methane from the atmosphere. Thus more from the sources and less taken away by the sinks.

Even the final increase in methane shown in the annual change for 2010 corresponds to a fall in humidity and a modest increase in CO2 suggesting an El Nino with some methane produced. Of course it may get worse. If the 2010 Iceland volcanic eruptions have produced substantial sulphur dioxide then there could be further increases in atmospheric methane.

While the understanding of the behaviour of methane in the atmosphere is subject to some dispute, most of the research effort has been devoted to the sources of methane and little attention paid to the sink.

A careful examination of the likely causes of variations in methane emissions suggests there is little or no basis for concluding that the variations of the last twenty years are due to human activity.

Get Them Young, Make Them Green