Short snippets of news filtered through the media this week about the visit by the President of Mongolia to the United States and his meeting with Barack Obama. President Obama apparently received the Genghis Khan Medal from President Elbegdoji. The Mongolian President is of the view the United States, like Mongolia in it’s heyday (13th Century Genghis Khan era), “has a responsibility to help those who are trying to follow in it’s footsteps.” President Elbegdoji is also of the opinion that just a “few” people were killed to maintain peace, and hunt down terrorists, during the era of the Great Khan — about 40 million or so.

Also this week appeared a wee mention of the rare earth neodymium in an article by London based writer and climate rationalist, Matt Ridley. What, you may wonder, has Genghis Khan’s Mongolia to do with neodymium. Well in the Inconvenient Truth Stakes, actually, quite a bit. You see, neodymium is a key to the manufacture of wind turbines, and Mongolia (Inner and Outer) is the source of much on the world’s supply of neodymium. A large wind turbine can require about 2000kg of neodymium for the production of it’s alloy magnet, the vital component that powers the wind-turbine generator.

What is never mentioned by Bob Brown, Christine Milne and the proponents of so called clean, green energy, is the environmental degradation that is occurring in Mongolia and China as a result of the sudden demand for neodymium by the wind-turbine industry in the West. A demand to satisfy the quest for so called renewable energy. But the big question is — is it “green” and is it “clean”? And indeed, exactly what is the extent of the carbon and environmental footprint of wind turbines as they stomp their away across our landscape and coastlines.

An extraordinarily clear and frank investigation by Simon Parry and Ed Douglas of London’s Daily Mail revealed this year, the dirty, dark secret of the extraction of neodymium in Mongolia and it’s refinement in China. As these two countries hold about 90% of the worlds neodymium, the environmental devastation is confined to a small area that can be easily observed and studied. The Daily Mail’s reporter, Simon Parry went to the western Chinese city of Baotou to have a peek at the beginnings of a clean, green wind turbine magnet.

On approach to Baotou he says; “an old farmer stares despairingly out across an immense lake of bubbling toxic waste covered by black dust. He remembers it as fields of wheat and corn.” The lake is filling with the radio-active slurry from Baotou’s rare earth factories and chemical processing plants. The rare-earth ore has been shipped to Baotou from the Mongolian border regions where it has been extracted from the ground by pumping into the earth, toxic chemicals — the start of the clean, green process. 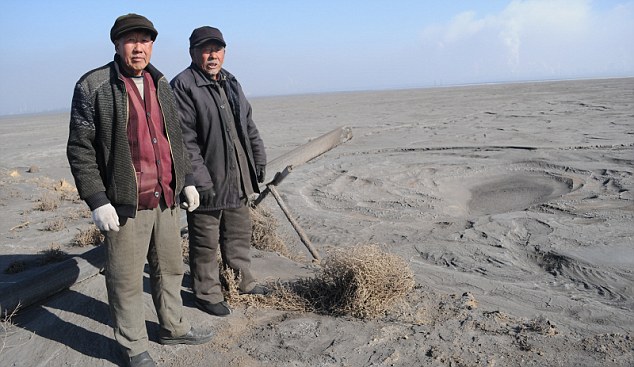 According to the Daily Mail:

Hidden out of sight behind smoke-shrouded factory complexes in the city of Bautou, and patrolled by platoons of security guards, lies a five-mile wide ‘tailing’ lake. It has killed farmland for miles around, made thousands of people ill and put one of China’s key waterways in jeopardy.

This vast hissing cauldron of chemicals is the dumping ground for seven million tons a year of mined rare earth after it has been doused in acid and chemicals and processed through red-hot furnaces to extract it’s components.

When we finally break through the cordon [security] and climb the sand dunes to reach the brim, an apocalyptic sight greets us: a giant, secret toxic dump, made bigger by every wind turbine we build.

The population of Bautou permanently wear face masks. People claim their hair turns white, their teeth fall out. They suffer from severe skin and respiratory diseases. Children are born with soft bones. Toxicity tests on the lake are kept secret and Chinese officials refuse to acknowledge health risks. Face-masks are sold by the side of the road for passing motorists. Meanwhile the bubbling lake of radio active toxic sludge grows by 3 feet a year. No doubt the last thing on the minds of Green activists, as they paddle down the pristine Gordon and Franklin rivers in Tasmania, is the plight of Baotou and it’s suffering people — talk about wind-turbine dreaming.

The back-end of the Daily Mail’s Baotou story is heather covered highlands of Scotland and it’s scenic coastline. The clean, green mythology confronts reality. About half of the UK’s wind turbines are in Scotland. Each wind turbine pad there requires 1500 tons of concrete another hated product of fanatical Greens — third only to coal and oil. Then there is the kilometres of service roads for the turbines, which ironically require another by-product of oil — bitumen. Oh dear! Another inconvenient truth the Green lobby ignores in Scotland is the draining of peat moors which are drained to enable turbines to be constructed.

The carbon dioxide involved in concrete, bitumen, steel and copper, to say nothing about the poor critters being cooked in the toxic oven that is Baotou, is conveniently ignored by the high priests of renewable energy.

Under the whacky Renewable Energy scheme in the UK electricity suppliers have to buy a percentage of their energy from renewable generators and are allowed to pass on that cost to households and commercial consumers. Sound familiar? We’re not stupid here in Oz.

Of course issues about the environmental costs and the hypocritical games being played in the madness of Greens renewable energy policies, policies the Australian government has failed to question or examine, are the sort of thing that “our” ABC should be investigating and reporting back to the Australian people. Some chance!

The next time Brown, Milne, Windsor, Gillard, Combet and their fellow travellers start rabbiting on about wind farms, and saving the planet, and renewables—spare a thought for the people of Baotou and the mine-workers of Mongolia. Have a Genghis Khan moment. Think neodymium.

A Q &A episode with Bob, Christine, Greg and Julia and a few white-haired citizens of Baotou on the panel — now that would be something — but don’t hold your breath!

Reichsfuehrers of the Climate Con Job