Analysts at the Australian Bureau of Meteorology have some explaining to do.

The annual rainfall figures are shown as reported in October 2010: 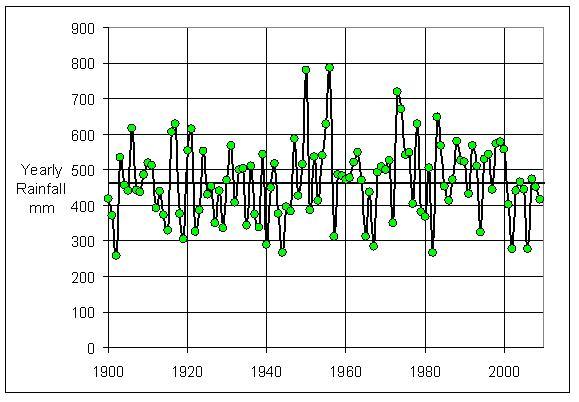 There is no significant trend in rainfall through this period but there is large variability with rainfall extremes of a 257 mm minimum and a 787 mm maximum.

The comparison with the August 2008 report is revealing. The difference is a decrease of 900 mm rainfall in the 2010 report. The significant decrease occurs after 1948:

The Bureau is already on record adjusting Australian temperature measurements and they now appear to have turned to rainfall, making the last 60 years drier than previously reported.

One can understand that adjustments might be made to a few of the most recent years as records are brought up to date but a delay of forty or fifty years seems a little long.

This raises the question how certain is the data that is used by policy makers?

When we are confronted by apparently definitive forecasts of our future with rising temperatures and less rain, are we living through a period that brings to mind the Polish radio announcement of Soviet times?:

The future is certain only the past is unpredictable.