After this essay was published online the CSIRO recognised the validity of Tom Quirk’s argument by quietly updating the Figure criticised by him in their “State of the Climate” report. Read Tom Quirk’s “Postscript to The Unfinished Hockey Stick” here…

Paul Fraser, the Chief Research Scientist at CSIRO, has responded to this essay here…

A Trend is a trend
But when will it end?
Will it reach for the sky
Or burn up and die
Or will it just go round the bend?
Whitehall doggerel

The CSIRO paper “State of the Climate” is as much a commentary on the state of the climate scientists who put the document together. The CSIRO has waded into a large government funded trough and is not inclined to publish anything that gets between it and the trough.

The story of methane shows how this self censorship works. On page 5 under the title “Our Atmosphere” the opening sentence lays out the state of our atmosphere:

Global CO2 concentrations have risen rapidly over the last century. Methane, which is another greenhouse gas, has shown similar increases.

This statement is backed up by Figure 1 reproduced below showing changes in carbon dioxide and methane in the atmosphere. Measurements before the 1950s are all indirect through the analysis of air bubbles trapped in ice and sampled from ice cores recovered from the Law Dome in Antarctica. 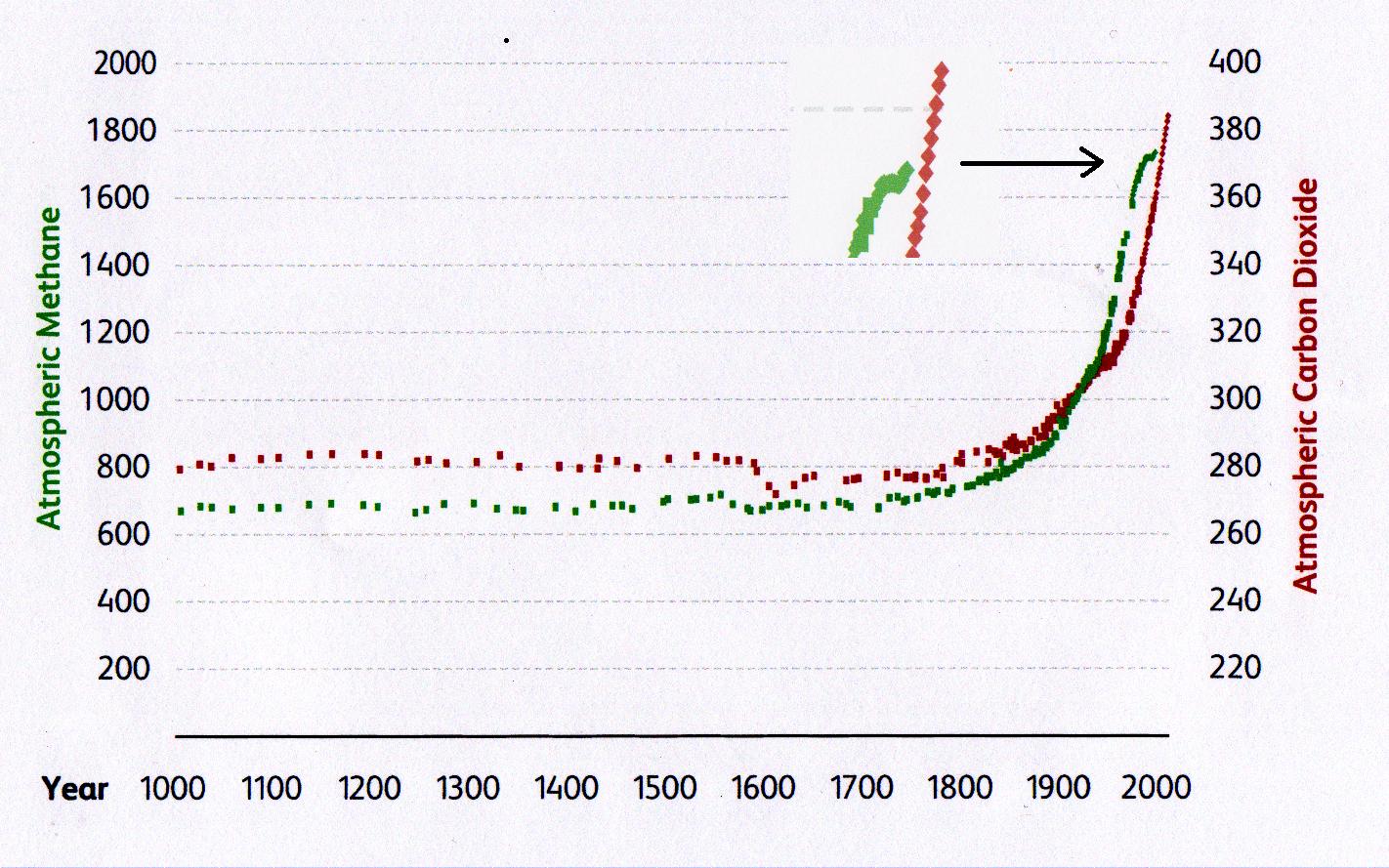 Figure 1: Carbon dioxide (parts per million) and methane (parts per billion) concentrations measured in ice cores and directly in the atmosphere.  Note the insert showing the shortfall in methane measurements.

The insert of Figure 1 shows that the methane data is only plotted up to 1990. This is some ten years short of the carbon dioxide measurements. Yet groups within the CSIRO have been involved in measurements up to the present within international collaborations.

What has happened since that time? Figure 2 tells the story. Methane concentrations have plateaued. This does not fit the CSIRO storyline.

Figure 2: Recent measurements of atmospheric methane[i]. The solid line is the globally averaged value while the dashed line shows the annualised changes with seasonal variations removed.

This should be a wake call for policy makers. The IPCC[ii] in its wisdom has provided this insight:

The reasons for the decrease in the atmospheric CH4 growth rate and the implications for future changes in its atmospheric burden are not understood but are clearly related to changes in the imbalance between CH4 sources and sinks.

Worse still, much effort went into identifying and explaining with great confidence the annual methane increases of the 1970s and 1980s. The expansion of agriculture with more rice fields and more cows was identified as the particular villain. The uncertainties were of the order of 50% on any one source but there was great confidence in the estimated changes. Yet it all went wrong. But not before the CSIRO and others started government financed R & D.

The development of policy paralleled this with the Carbon Pollution Reduction Scheme. Regulations for fugitive methane in the case of coal mines and natural gas pipelines were developed. The most courageous of which was assessing pipelines for fugitive methane on the basis of pipeline length not gas transported. The annual revenue from coal mines was estimated at around $1 billion by ACIL-Tasman[iii] and was 10% of the cash revenue in the scheme. Australia was the only major coal mining country to include fugitive methane from coal in a carbon dioxide reduction scheme. Farmers were not ignored but it proved more difficult to regulate agriculture and so most advanced countries did not seek redress from methane down on the farm. Except for Australia where in the first attempt to get the Carbon Pollution Reduction Scheme through parliament, farming activities were included!

The behaviour of atmospheric methane can be understood very simply[iv]. It is natural variability, largely determined by El Ninos, volcanoes and pipeline leakage of natural gas.

El Ninos have the ability to vary both the sources and the main sink of methane. Droughts and bush and swamp fires are believed to release methane. Large changes in humidity in the tropics moderate the major sink where methane is removed by reacting with hydroxyl radicals coming from water vapour. Thus more or less water vapour gives rise to less or more methane in the atmosphere.

Volcanoes produce sulphur dioxide that also reacts with hydroxyl radicals. This reduces the methane sink when massive amounts of sulphur dioxide are produced in eruptions, such as the 17 M tonnes from Mount Pinatubo in 1991. 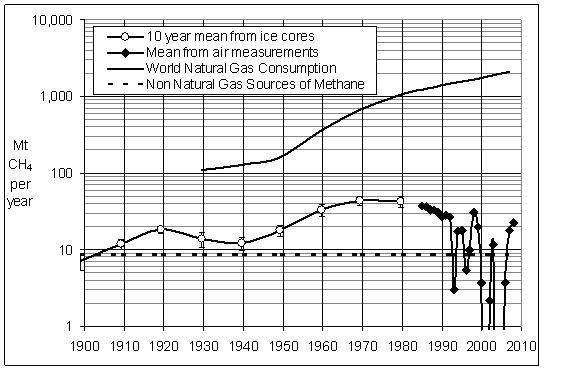 Figure 3: Annual changes in atmospheric methane averaged in 10 year intervals from ice core derived data and year intervals for direct air sampling. The world natural gas consumption is from the BP Statistical Review and estimate from C J Campbell. The non-natural gas sources are estimated at 8.4 Mt per year (3 ppb per year) from 1900-1910 and 1993-2008.

Finally Figure 3 shows the development of natural gas consumption and the increasing methane in the atmosphere. Starting in the 1950s, the conversion from town gas and coal gas to natural gas for domestic and commercial use led to a general increase in atmospheric methane through leakage from transmission and distribution networks. This reached a peak in the 1980s at the time of the collapse of the Soviet Union with major losses of methane to the atmosphere in the pipelines from Siberia. This has been well documented[v] In fact troubles on the Trans-Siberian pipeline led to a massive explosion in June 1982 estimated at 3,000 tonnes equivalent TNT[vi]. It was the most monumental non-nuclear explosion and fire ever seen from space. The major losses appear to have been made good in the 1990s although there is bound to be continuing leakage.

Only an average 5% loss of natural gas is sufficient to explain the rise in methane.

The dramatic reduction in methane gas emissions from the natural gas pipeline system is a real example of an anthropogenic effect.

While the state of understanding may not yet be sufficiently robust to allow long-term policy decisions, already the assumed adverse future consequences of atmospheric methane increases are called into question. In fact, measurements over the last fifteen years fail to indicate a reason why action relating to methane from industrial or agricultural activity is justified. While methane variability remains restricted to natural causes, the best policy is to do nothing.

Paul Fraser, the Chief Research Scientist at CSIRO, has responded to this essay here…

Prepared for Australian Coal Association 7 May 2009

[v] Rabchuk, R. I.; Ilkevich, N. I.; Kononov, Y. D, 1991; A study of methane leakage in the Soviet natural gas supply system. Prepared for Battelle Pacific Northwest Laboratory, Siberian Energy Institute, Irkutsk 1991. The paper reports that losses from gas production and transportation in the former USSR are very high, about 3 to 7 per cent of total gas production.

I’m Dreaming of a Green Christmas