Scandal between the covers

The first book on the Climategate scandal has just been published – Climategate: The CRUtape Letters by Steven Mosher, Thomas W. Fuller 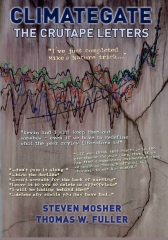 The Climategate scandal covered from beginning to end – from ‘Hide the Decline’ to the current day. Written by two authors who were on the scene – Steven Mosher and Tom Fuller – Climategate takes you behind that scene and shows what happened and why.

For those who have heard that the emails were taken out of context – we provide that context and show it is worse when context is provided.

For those who have heard that this is a tempest in a teacup – we show why it will swamp the conventional wisdom on climate change.

And for those who have heard that this scandal is just ‘boys being boys’ – well, boy. It’s as seamy as what happened on Wall Street.