Does GW Really Cause Birds to Become Smaller?

An article in the Sydney Morning Herald on 13 August, 2009, reports that, “CLIMATE change is shrinking Australia’s birds. During the last century, biologists say, some birds decreased in size by almost 4 per cent.”

Reports that climate change is causing some kind of far fetched change in something or other are now a daily occurrence in a news media which has abandoned any vestige of due diligence in reporting stories which appear to support the dogma of global warming. Storms, floods, droughts and heat waves well within the  bounds of natural variability over recent centuries are widely attributed to Global Warming and are said to be unprecedented. Even record cold is claimed, although in this case it is rebadged as Climate Change. Utterly unremarkable minor fluctuations in nature that would otherwise pass un-noticed are routinely provided global news attention by merely suggesting a link to GW. 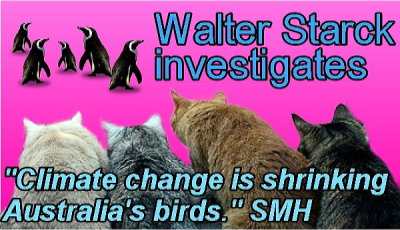 The above mentioned study compared the wing lengths of bird specimens in museum collections and found that those collected in recent years were 1.8 to 3.6% smaller than those collected a century earlier. It was noted that birds from Sydney had shrunk to the size of those from Brisbane and that the scientists had, “…ruled out other possible explanations, including nutritional changes.” It was further said that studies in Europe and New Zealand had found similar declines in size but that previously,  ”nobody has been able to pin down the underlying mechanisms”. It then offered the prediction of extinction if the birds couldn’t adapt fast enough.

It doesn’t require sophisticated scientific knowledge to recognise that any link to climate change in this matter is pure speculation and extinction is only a gratuitous addition for dramatic effect. Consider these simple facts:

Although the scientific community has traditionally been a bulwark against superstition and hysteria it appears that the Global Warming meme has found a new generation of researchers with little immunity and they have become a prime reservoir for wider infection.

It is past time for the hardened sceptics of the Fourth Estate to begin to do their duty and start to provide this constant stream of toxic climate drivel the exposure it deserves.

For a quick perspective on just how absurd the list of things attributable to Global Warming has become, see numberwatch: an alphabetical list with hundreds of links.

Beware, Parents, Your Kids Are Being ‘Scootled’